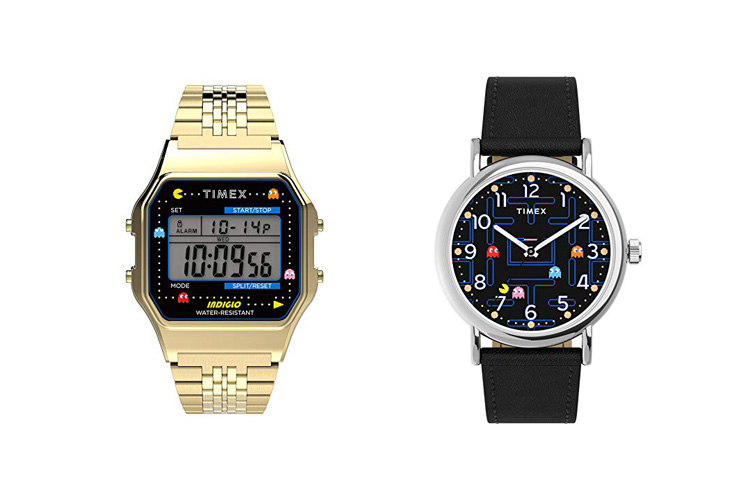 Pac-Man, developed by Japanese video game developer Namco in 1980, is considered one of the greatest video games of all time. Its main character, which in Japanese translates to “paku” (which means “to chomp), is also one of the most recognizable characters of all time.

Because of its popularity, it became one of the first games to have a huge advertising campaign, which made it popular not just in Japan and the US but all over the world. Merchandise, from clothing and mugs to board games and books, became just as popular as the game itself. There were also successful game sequels, more arcade machines, TV series, and film appearances.

Below, we’re going to zero in on one of the Pac-Man merchandise that was hugely popular in the 80s and until today—watches that feature the iconic protagonist of the video game. Some of these are no longer in production but can still be found on sites like eBay, while others are reissued designs by popular watch brands.

We talked about Pac-Man watches briefly in our article about iconic  80s watches , but this one will focus solely on the eponymous character.

The Timex T80 is a model that was first released in the 1980s, the same year that the Pac-Man game was born. This was one of the first-ever digital watches for mass production—it was stylish and did not cost a

To celebrate the brand’s iconic T80 watch design and the 40th year of the game, Timex re-released the model as the Timex T-80 Pac-Man watch. A design for those who grew up with joysticks and the game, this square-shaped digital timepiece is all about nostalgia, having a retro design with one of the biggest game icons of the 80s.

This version has Pac-Man on the watch face and contains all the functions of the classic T80 model. Some of the main features include a month/day/date display, stopwatch, daily alarm, and an Indiglo Light-Up dial. The case is made of resin, and the strap has choices of gold-tone, black, and silver. The water resistance is up to 30m.

A quirky detail worth mentioning is the Pac-Man-engraved case back, as well as a Pac-Man molded design on the bracelet.

This is another Pac-Man-themed watch by Timex. The classic Timex Weekender watch, another popular line, is designed with the game in mind—with Pac-Man chomping the markers while on the ticking seconds hand, a fun way to make the watch look like a game.

This 38mm model has a more sophisticated look, with a sleek genuine leather strap. Like the T80 model above, this one has water resistance to 30m and Timex Indiglo. The 38mm case is made of Brass & LLB, with a polished silver-tone case and a black dial. The dial has Pac-Man graphics, but the watch remains legible because of the bold, full Arabic numeral markers.

One of the most unique details about this watch is the hidden pattern within the dial that’s revealed when the crown is pressed. Other features include a mineral glass crystal, full Arabic numeral markings, and stainless steel attachment hardware.

The now-defunct Nelsonic was a New York company that produced a number of game-themed watches in the 80s. This is one of their hits—the game watch, an invention that functions both as a watch and a video game.

Other game watches produced by Nelsonic included Barbie, Mario, Donkey Kong, and G.I. Joe. There’s also the Q*Bert watch, which features the character from the 80s arcade game. Like the Pac-Man model, this is a game watch that allows the wearer to tell the time and play the game using small buttons on the dial. We included this watch in our article about Stranger Things watches, where we featured the watches worn in the 80s-themed Netflix show.

There are still a couple of Nelsonic Pac-Man models on eBay, such as this one, which is in good working condition.

Romain Jerome is a luxury Swiss watch brand known for its unconventional luxury timepieces. Following the success of its Space Invaders watch release (the brand partnered with Taito Japan) under their Moon Invader collection, the Swiss brand released the RJ Pac-Man watch.

According to A Blog to Watch, this is the first time that Pac-Man is being featured on a luxury product. The brand has four versions of this release, and all models have the character positioned at 9 o’clock on top of a 3D maze dial.

The RJ Pac-Man watch is made of stainless steel and is 46mm wide, with a PVD black-coated case. The watches are powered by the powerful Swiss automatic Concepto movements. Other main highlights include luminescent hands, a scratch-resistant sapphire crystal, and a silver medallion case back. The water resistance is up to 30m.

These watches had a limited release in 2012 and had an exclusive release in Paris. The watches were reportedly priced at $17,900. There are second-hand models available online, including this one on eBay.

This one was made exclusively for ClubNAMCO. Another limited-edition model (only 500 pieces were released), this watch features all the Pac-Man characters and features on the dial, such as Pinky, Inky, and Pokey, cherries, and the dots that Pac-Man gobbles up.

The markers are power pellets, and there is an invisible second hand to chomp them up. The watch is stainless steel with a serial number at the back. These were originally sold for around $130, but second-hand prices vary.

This model is a sleek, minimalist design. Italian designer and art director Benedetto Papi designed this Pac-Man-inspired timepiece, a concept that has a simple, clean dial of black and yellow, showcasing the main character on the entire case.

The watch has a unique design of having the two edges forming two parts and showing the time. This, however, was only a concept and did not go on sale.

You can learn more about the watch design on Papi’s Behance site.