When it comes to fitness-focused smartwatches, there is no standard formula. Some watches opt to mix essential smartwatch features such as smart notifications with health and fitness tracking features. Others ditch some of the fancy smartwatch features in exchange for better battery life. And as a consumer, the one that fits your style can become quite confusing since both concepts offer great benefits.

In this article, we will help you in deciding which one fits your style and needs better. We will be comparing the Amazfit Stratos, a stylish smartwatch that has all the bells and whistles with the Garmin Instinct, a more simple and retro-inspired watch that puts functionality and reliability over fancy features.

We will be going through several key aspects such as their build quality, feature set, and help and fitness tracking capabilities. Keep on scrolling if you want to learn more.

*Please note, Amazfit rebranded their entire product line to “Zepp” in mid-2020, so you may see watches advertised with the new or old branding while some shops list the products with a hybrid naming such as Amazfit (Huami) Zepp.

Amazfit is a US-based company that is owned by Huami. It was founded in 2016 and is the exclusive partner and smartwatch provider for Xiaomi. They serve as the extension of Huami and deal with the more expensive and more complex smartwatches.

The Huami branding was originally used for Xiaomi’s basic wearables, specifically the Mi Band Series. The success of Huami’s wearables in Asia enabled them to expand globally. Huami then established Amazfit to compete with higher-end brands such as Fitbit. And in just a short period of time, Amazfit has managed to become the second-largest wearable manufacturer.

Aside from smartwatches, Amazfit has ventured into other wearables as well, such as wearables for the ears. These are the Amazfit Powerbuds and Amazfit Zenbuds. The Zenbuds include various health monitoring features similar to the ones found on their smartwatches. Amazfit is continuously going in this direction and is creating more fitness-oriented products outside of smartwatches.

Garmin, on the other hand, is a much older company compared to Amazfit. They were founded in 1989 in Lenexa, Kansas, and was initially known as ProNav. And as their name suggests, ProNav (Professional Navigator) primarily focused on GPS and other tracking devices.

ProNav initially only conducted business with entities such as the U.S Military. By the year 2000, Garmin is one of the leading developers of GPS devices in the world, with over three million units sold and around 50 different GPS models in their catalog.

However, after a few years, ProNav rebranded into Garmin, which was derived from the names of their two founders, Gary Burrell and Min H. Kao. The newly rebranded company’s goal was to expand their catalog and offer more products that integrate their GPS Technology.

Today, aside from professional aviation, marine devices, and other devices that utilize location tracking, Garmin is also well known for products such as activity trackers, sports watches, and premium smartwatches that incorporate their previous innovations.

Popular Garmin wristwear includes the Vivofit, Vivosmart, Forerunner, and the Fenix series. The Vivofit is primarily an activity tracker. The Vivosmart and Fenix are considered to be excellent entries into the sports smartwatch category with their rugged build and sport-centric functionalities. Back in 2018, Garmin improved upon its smartwatch technology by introducing Bluetooth, music playback, and NFC payment into its flagship wristwear products. Garmin is also currently partnered up with Spotify, which is now available by default with their newer smartwatch models.

The Garmin Instinct looks and feels similar to vintage Casio Watches. It has a rugged and boxy look that just screams durability and quality. This watch takes Garmin’s signature solid build quality to the next level.

Additionally, the Instinct has a monochrome display, which further adds to its vintage-style appeal. We will be talking more about this in its dedicated section. Overall, the Garmin Instinct’s has a no-nonsense design that is strictly aimed at the active lifestyle.

The Amazfit Stratos, on the other hand, has a more modern and classy look. It is aiming to be an all-in-one smartwatch that never looks out of place whether you are in the gym or in a business meeting.

One thing to note is that while the Stratos is a gorgeous looking watch, it doesn’t do much to separate itself from most modern smartwatches. It has similar button placements, screen size, and is overall very similar to Amazfit’s other watches.

The Amazfit Stratos has a physical dimension of 48 x 48 x 15 mm, and it weighs 60 grams. It also has a 22 mm wide bracelet that is interchangeable with both Amazfit and third-party offerings.

The Garmin Instinct, on the other hand, has a physical dimension of 45 x 45 x 15.3 mm and is a little lighter than the Stratos. It also has a 22 mm wide bracelet that is interchangeable with third-party offerings. 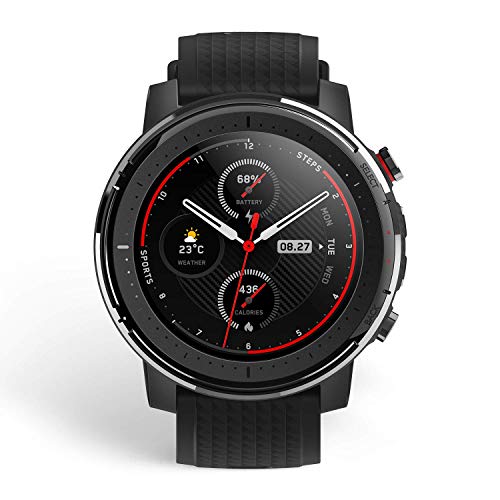 As mentioned earlier, the Garmin Instinct has an amazing build quality. It is designed to withstand drops and harsh environments. It can survive falls that even higher-end watches such as the Garmin’s Fenix line would not.

The fiber-reinforced polymer casing is resistant to scratching during accidental falls. Additionally, both the chemically strengthened glass and raised bezel protect the screen.

Additionally, the Garmin Instinct has five buttons that are tactical and satisfying to press. The layout is optimized for the UI, which is also used on the Garmin Forerunner and Fenix lines. These buttons are the sole method for navigation since the Instinct does not come with a touchscreen.

The Amazfit Stratos, on the other hand, isn’t as well built as the Garmin Instinct. However, it is still a premium smartwatch and is competitive to any smartwatch under $200 in terms of its build.

It has a polycarbonate body material with three 316L stainless steel physical buttons. This watch also has a 50 meters water resistance that is safe for both open and indoor swimming.

Overall, both watches are well built. However, the Garmin Instinct is, without a doubt, the better-built swatch.

As mentioned earlier, the Garmin Instinct and Amazfit Stratos are utilizing two completely different panels for their screens. The Amazfit Stratos has a 1.34″ LCD touch screen that has a resolution of 320 x 300 pixels.

The LCD touchscreen is noticeably inferior to Amazfit and Garmin’s other AMOLED equipped smartwatches. The Stratos’s screen is considerably dimmer and not as vibrant as its AMOLED counterparts. Hover, the use of LCD over AMOLED allows the Stratos to have better battery life. Additionally, its screen is easily visible regardless of the lighting condition.

The Garmin Instinct, on the other hand, has a 128 x 128-pixel monochrome display that is reminiscent of vintage Casio smartwatches. It is easy to both in direct sunlight and in low lighting conditions. This is very important since the Garmin Instinct is expected to be used in different outdoor scenarios.

The better screen will completely depend on your use case and tastes. The Garmin Instinct’s monochrome display will not be able to display the same kind of detailed visuals as the Amazfit Stratos. The lack of a touchscreen functionality can also make navigation harder and slower.

But, of course, users who are not a fan of Amazfit’s software design or users who want a simpler interface will find the Garmin Instinct’s screen to be better than the Stratos’ LCD display.

The Amazfit Stratos and Garmin Instinct are relatively similar when it comes to the features that they offer. Both watches give various alerts and notifications, such as phone calls and text messages. They both also have a stopwatch, silent alarm, vibrating alerts, and the ability to be integrated with social networks.

There are some slight differences when it comes to the way they interact with these notifications. The Stratos, for example, can accept incoming calls. It cannot s cannot reject or mute them.  The Garmin Instinct, on the other hand, can accept, reject, or mute Incoming phone calls.

However, there are some major differences between the feature set of these two watches. The Instinct has more focus on exploration features such as the ability to upload different maps to the device.

The Amazfit Stratos, on the other hand, places more emphasis on features that benefit casual users. One example is onboard storage, which can store music. Additionally, you can connect wireless earbuds via Bluetooth to have a portable music player that is independent of your smartphone.

Of course, another difference is the presentation of these features. The Garmin Instinct will inevitably have a simpler interface since the graphics that it can display on its monochrome screen will be more limited compared to the Stratos’ LCD display. Of course, this will come down to personal preference.

The Garmin Instinct and Amazfit Stratos are both feature-packed when it comes to fitness and health tracking features. Both watches have essential health tracking features such as distance tracking, sleep monitor, and heart rate tracking. Also, they both automatically recognize and record various activities, including walking, running, climbing, and biking.

Of course, the main difference will be in the presentation. Both have preloaded sports modes. The Amazfit Stratos features 80 sports modes that are optimized for both casual exercises and training for professional athletes.

The Garmin Instinct, on the other hand, has more emphasis on activities related to exploration. The data can also be uploaded to the Garmin Connect online fitness community.

Overall, the fitness and health tracking capabilities of these smartwatches are relatively similar. The one you prefer will depend entirely on which companies’ presentation you prefer.

Both watches are compatible with Android and iOS devices via Bluetooth. The Amazfit Stratos supports WiFi connectivity, while the Garmin Instinct does not.

Additionally, both watches do not have NFC for wireless transactions. One feature that is present with the Garmin Instinct but not in the Amazfit Stratos is ANT+.

The Amazfit Stratos can last up to five days with regular use. Its battery life is considerably better than Amazfit watches with similar features that utilize AMOLED display.

The Garmin Instinct, on the other hand, has significantly more battery. It can last up to 14 days with regular use, up to 16 hours of continuous GPS mode, and up to 40 hours in Ultra Trac Mode.

The Instinct’s battery life isn’t too surprising considering its monochrome display, lack of touchscreen, and many other missing features. However, the added battery life can easily come clutch if you ever get lost or if you are doing outdoor activities for an extended period.

Overall, both watches are impressive devices that are easily worth their asking price. The better watch will depend entirely on your use-case. 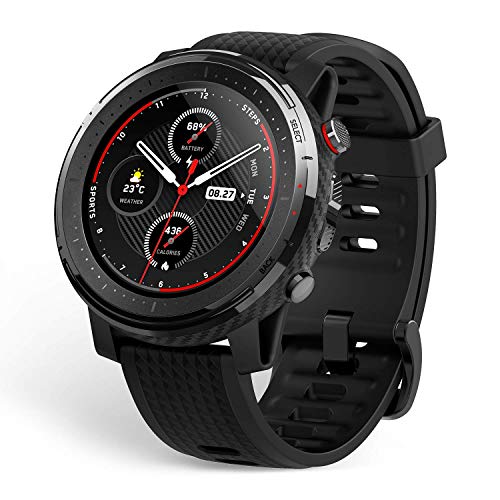 If you are looking for a smartwatch that can be used in any type of activity, then the Amazfit Stratos will fit you better. It has all the basic fitness and health tracking modes as well as most of the standard smartwatch features such as smart notifications.

Its build quality isn’t as good as the Garmin Instinct. But for everyday use, the Stratos is good enough.

If you are willing to trade some of the fancy smartwatch features such as the touchscreen and colorful display for a rugged watch that is packed with tons of navigation features, then the Garmin Instinct will fit you better.

It has enough battery to last whatever activity you need to do, and it has most of the essential features that are needed in outdoor scenarios.