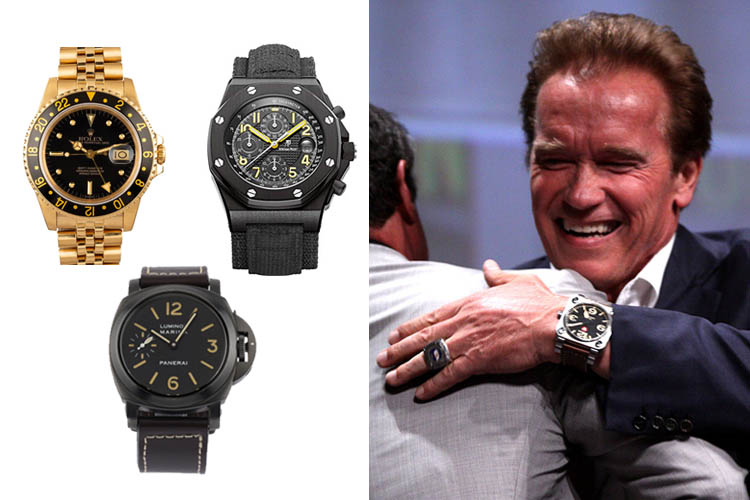 Image Credit: Gage Skidmore from Peoria, AZ, United States of America via Creative Commons
Arnold Schwarzenegger is a former professional bodybuilder, former politician, businessman, actor, and a watch enthusiast.
He started lifting weights when he was just 15. Then, at age 20, he already won the Mr. Universe (a bodybuilding event held annually). After that, he won the professional bodybuilding contest, Mr. Olympia, seven times. As such, he became an influential personality in the world of bodybuilding. In fact, the second-most important bodybuilding event (next to Mr. Olympia) was named after him – The Arnold Sports Festival.
He later on performed in Pumping Iron, a documentary about bodybuilding, wherein he was discovered and so landed a spot in Hollywood. He then became an action star with his breakthrough movie Conan the Barbarian. He also performed in other successful action movies like the Terminator movie series, Commando, Total Recall, and True Lies.
Then, in 2003, he was elected as the Governor of California, thereby replacing then-Governor Gray Davis. He was re-elected in 2006 and served in office until 2011.
In 2015, he finally launched his own range of watches – The Arnold Schwarzenegger Watch Collection.

The Arnold Schwarzenegger Watch Collection is comprised of 18 large-faced watch models. Schwarzenegger partnered with the Brazilian Magnum Group to create these timepieces that are being offered at an affordable price range.
In an interview, he shared that:
“I have always been interested in watches but the ones that I liked, like this one, for instance, it’s a beautiful watch but not something everyone can afford. So therefore the idea was to create a watch line that looks like that, that it could be fifty thousand dollars or one hundred thousand dollars but it cost only between eight hundred and fifteen hundred dollars. So this is what the idea is of the Arnold line. So that almost everybody can afford it and they can be proud of something that is bigger than the normal watch out there.”


In the movie Eraser, John Kruger (played by Schwarzenegger) was seen winding a classic Panerai Pre-Vendome Luminor Marina PVD 5218/203A. The said timepiece was given to him by his friend Sylvester Stallone.
This Panerai Luminor is powered by a manual-winding mechanical Unita UT-6497 movement with 17 jewels. The 44mm watch case is made of stainless steel, has a black PVD coating and the Panerai-patented locking crown. The dial, moreover, is plain black with luminous fat numbers and markers. For the strap, it comes with tan leather completing the vintage look of the timepiece.


Now U-Boat is not a brand you’ll commonly see in celebrities’ watch collections; much more the U-Boat U1942 timepiece.
The U-Boat U1942  is a limited edition watch with only 29 pieces produced. Each was masterfully handcrafted in Italy. It was built in accordance with military-grade standards of Italy in the 1940s. It has a titanium case with six hexagon screws, making the timepiece water-resistant up to 400 meters. The bezel is also made of titanium and the dial window is made of plexiglass. It also has a brown leather strap with a titanium jewelry clasp. It is powered by a manual-winding caliber 6497 movement.

As a watch enthusiast, it is not surprising that Schwarzenegger also has a vintage Rolex in his collection. In fact, it is one of the pieces that’s been in his collection since his bodybuilding days and way before he entered Hollywood.
The Rolex GMT-Master ref. 16758 is made of 18k yellow gold with 40 mm case and an Oyster bracelet. It also has a bidirectional rotating bezel with a 24-hour bezel insert. The dial is black with gold “nipple” markers, gold hands, and a date window at 3 o’clock.