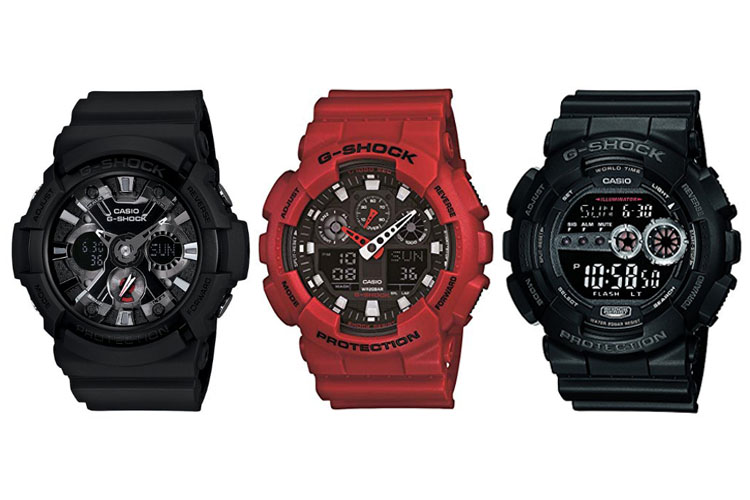 G-Shock has a reputation for their bulky yet extremely tough timepieces, but did you know that they also offer larger models? We are, of course, talking about the G-Shock XL series. There is a certain charm to wearing a large and durable watch. The masculine and rugged design of the XL series really gives a sense of power to the wearer. The heft, durability, and functionality of these behemoth watches certainly put them on a league of their own. If you love these tank-like juggernauts, then you are in for a treat as we will be showcasing the best G-Shock XL watches in the market today.

On the other hand, if you like what G-Shock has to offer but are not too fond of the cumbersome build, there are G-Shocks watches for small wrists and are ideal for kids as well. So, without further ado, let us get to the heavyweight main event of the evening!

With a case diameter of 51.2mm, the GA-100 XL definitely delivers a hefty look. The good news is that this substantially sized case is made from resin, which means it is not as heavy as it looks. Underneath the tank-like build lies a high-precision and reliable Japanese quartz movement. The GA-100 XL model is also packed with features that makes it a fantastic sport watch as well. It comes with all the standard G-Shock functionality such as a 1/100th second stopwatch, countdown timer, auto-calendar, and the ability to switch between 12 and 24-hour format.

The GA-100 XL’s blood red color tone adds a bit ruggedness to its look which complements its excellent performance. In addition, this G-Shock XL watch also comes with a World Time for those who love to travel around the world. The 200-meter water resistance rating rounds off its outdoor capabilities, making this a suitable wristwatch for campers and hikers.

If you loved the classic G-Shock look with the small rings within the dial, then you will find the GD100-1BCR model to be a great blast from the past. This G-Shock watch comes in with a 55mm diameter case, making it a significant fixture on your wrist. The blend of current and 90s flair with the two second-counting rings with the digital dial is one of the GD100-1BCR’s best appeals – specifically, to those who love retro inspired stuff.

Despite the retro-look, this G-Shock XL watch is equipped with some additional features such as a World Time function that can display up to 48 cities, a high-density LED backlight for maximum visibility even in the dark, and a date-date display. The GD100-1BCR model also has a 200-meter water resistance which makes it suitable for a variety of recreational marine activities with the exception of scuba diving.

For those who like the mechanical steampunk aesthetic, they might want to check out the GA201-1 XL series as it features a highly industrialized X design. It features a 51mm diameter resin case with analog-digital display. The dial features a metallic X-shaped design which is quite cool. It has a full-black case and an engraved bezel with skeleton hands. Features include a World Time (48 cities), LED backlight, and a water resistance for up to 200-meters.

This is a Japan exclusive model so it also has that element going for it. While it is indeed a pretty basic G-Shock watch in terms of performance, its striking design is more than enough to make it a must-have for some fans and collectors.

Next up, we have analog-digital G-Shock watch entry that comes with an impressive 51mm diameter case build. The GA-110-1B features a more intricate and modern design, as expected from an analog-digital timepiece. What’s more, this is one of the more affordable G-Shock XL watches that provide an excellent level of functionality. The dial further advances its highly mechanical aesthetic with its use of polished metal hour markers and hands.

The GA-110-1B comes with an excellent selection of features, as well. It has the standard stopwatch, countdown timer, and full auto calendar which are staples of G-Shock watches. It also comes with a World Time function that can display time zones from 48 cities around the world. The World Time feature is improved upon by the dual-time display capability. This XL watch is also designed to provide up to 200-meters of water resistance.

The GW2310 model clocks in with a measurement of 53mm diameter and manages to pack every nook and cranny with outstanding features. The GW2310 is an XL watch for those who love to travel the world. Its Tough Solar recharging technology and multi-band 6 atomic timekeeping will make sure that this timepiece will be as accurate as possible no matter where you are in the planet. This is one of the more underrated G-Shock models due to its relatively low-price tag and basic design. That said, it is an affordable multi-functional solar-powered G-Shock watch – what ‘s more to say, really?

In terms of aesthetics, the combination of matte resin case with glossy bezel gives the GW2310 model a nice aesthetic flair. It features the signature shock resistant build and a 200-meter water resistance rating. All things considered, this is a pretty basic G-Shock watches with the added size factor and nifty solar-powered battery.

The GX-56BB is a military and tactical timepiece that features an all-black aesthetic. It features a rectangular resin case which measures in at 58mm in diameter making it one of the largest G-Shock models in the market today. This robust digital timepiece is also equipped with solar charging capability to enhance its outdoor performance. Add the 200-meter water resistance build and you can basically take the GX-56BB anywhere you want.

Additional features include a World Time that can display the time zone of up to 48 cities. It also comes with all the basic G-Shock functions (stopwatch, countdown timer, and auto calendar). If you want a strong G-Shock watch that looks and acts the part, you definitely need to check out the GX-56BB model.

The GA-700UC-5ACR XL model features a highly militarized design and with its 53mm diameter resin case, it truly encapsulates the word ‘tank-like’ in its appearance. While it has a hefty build, it definitely feels surprisingly light and comfortable to wear. The dial incorporates an analog-digital display with a bright LED backlight for optimum legibility even in low-light environments.

It also comes with World Time (48 cities), dual-time display, and all the standard G-Shock functionalities. It does come up somewhat short as it lacks solar-powered technology which could have rounded off the GA-700UC’s excellent outdoor aesthetics.

The G-Shock GG1000-1A5CR is a part of the brand’s ‘Master of G’ collection, so you can expect this to come packed with top-tier features and performance. The most notable feature here is its Twin Sensor build, which means that the GG1000-1A5CR is equipped with a built-in compass and thermometer. With the addition of the Tough Solar technology, this G-Shock XL watch will be a great addition to an outdoor enthusiast’s gear/attire.

With a 54mm full-black resin case and a beige canvas strap, the GG1000-1A5CR definitely looks the part of an outdoor watch. Besides the signature G-Shock durability and 200-meter water resistance, the GG1000 models are also designed to be mud-resistant, which makes the Mudmaster moniker very apt. We would also like to point out the highly-legible analog display which makes it quick and easy to check for the time. If you are looking for a tough XL watch that you can bring with you for tackling rough terrain, you can’t go wrong with what the Mudmaster series has to offer.

For those in the market for a premium-grade XL watch, the G-Steel XL Series is a good place to start yours search. It takes a different approach from other G-Shock models as its case, measuring here at 50mm, is made from a combination of stainless-steel and resin multi-layer construction. You can also opt to use a resin band or stainless-steel bracelet with this model, depending on your personal preference.

When it comes to features, the GST-S1000G model is a ‘Jack-of-all-Trades’ with all the basic timekeeping functionalities in tow. It also comes with Tough Solar technology and a 200-meter water resistance. Additional features include a World Time (48 cities) and a bright LED backlight. The G-Steel series delivers a refined style not commonly found in your standard G-Shock watch, making this the high-end G-Shock model of choice for most.