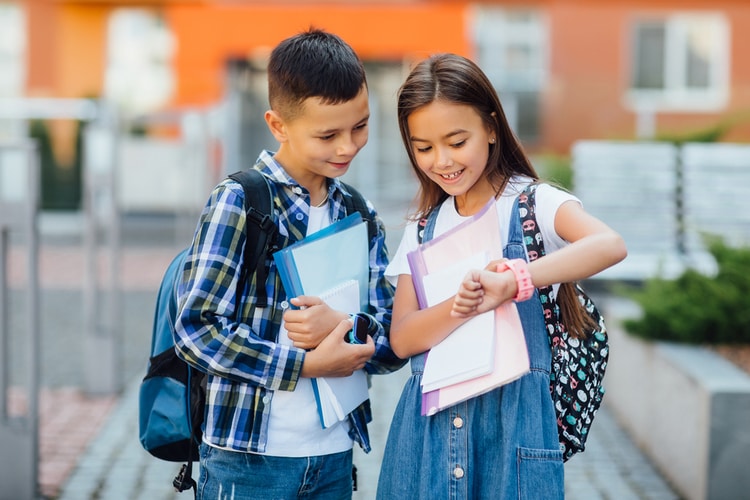 Here’s a fact for you: Over 50% of kids from five to ten years old own a mobile phone. The number is even higher for tweens and teens. There’s a myriad of wonderful reasons to give your child a cell phone—security, communication, and independence. But what if those same benefits could be found in something that doesn’t allow them to spend over three hours a day watching YouTube videos?
Enter the smartwatch. Smartwatches can give kids the ability to follow a schedule, get more active, take photos, communicate with parents and caretakers, and more. In fact, check out our article, 10 reasons every kid should have a smartwatch if you’re still on the fence.
However, chances are, if you’re reading this article, you’re already sold on the idea and have moved on to the next order of business: Which watch is best for your child.
There are many things to consider: age, needs, capacity, and more. We’ve plucked out some of our favorite watches from the wide expanse of offerings to help you find something that will not only fit perfectly on their wrist but perfectly in your lives as well.

Fitbit is an electronic consumer company that is best known for its activity tracking devices – specifically, fitness tracking smartwatches. The Fitbit Ace 2 is an activity tracking wristwear designed for kids six-year-old and upwards. It comes in three color variants, each with its fun charm: Night Sky/Neon Yellow, Watermelon/Teal, and Grape.
The Fitbit Ace 2 also comes with a slew of features that will help keep your kids physically active and prevent them from being too sedentary at home, which is a common issue with today’s generation of children. Other notable features include an accelerometer (tracks steps), bedtime reminders, timers, and alarms.
Additionally, there are other fun features to be had such as the ability to develop fitness challenges that the whole family can participate in. These challenges also offer nifty incentives for kids with rewards such as virtual badges and new avatars. Also, the Fitbit Ace 2 is compatible with the Fitbit app that you can download and install on your smartphone to help keep track of your kid’s progress easily.
Pros:

The Garmin Vivofit Jr 2 comes in a fantastic collection of designs featuring classic characters from Disney, Marvel, and Star Wars – giving kids a great selection of cool designs to choose from. Not only that, but it also comes with a great collection of features that will help keep your kids fit and healthy. The Vivofit Jr 2 comes with similar features to our first entry, the Fitbit Ace 2. However, the Vivofit Jr 2 manages to take the lead with a more in-depth activity tracking feature.
The most interesting feature regarding the Vivofit Jr 2’s activity tracker is the ability to set points or “coins” for each activity or chore set and completed. These points can then be used to unlock more fun challenges and adventures featuring iconic Disney characters. The Vivofit Jr 2 is designed for children five-years-old and up. The Vivofit Jr 2 also comes with all the standard features found in your average fitness tracking devices such as a step counter, reminders, alerts, timers, and a sleep tracker.
Pros:

Here we have the upgraded model of the Garmin Vivofit Jr 2, the aptly named Vivofit Jr 3. As you would expect, it comes with some notable upgrades from its predecessor, most noticeable being its larger screen. The larger display screen is Garmin’s provided solution to the most prominent complaint with the Jr 2. Not only does it have a bigger display screen, but the Vivofit Jr 3 also offers higher pixel quality with its 64-color MIP (Memory-in-Pixel) as compared to the Vivofit Jr 2’s 8-color MIP. All other aspects are identical between Vivofit Jr 2 and 3.
Pros:

With its bold and kid-friendly aesthetics, the Vtech Kidizoom DX2 is considered to be one of the best smartwatches for kids ages four to twelve. It features an age-appropriate UI that incorporates wholesome designs and vibrant color palettes. Vtech has always been known for its gadgets and devices aimed at kids, so it goes with no surprise that the Kidizoom Smartwatch DX2 checks all the key qualities to make it user and child-friendly.
The Kidizoom DX2 also features some nifty and practical features such as a calculator along with the typical timer and calendar. The Kidizoom DX2 also provides motion-sensor activities in the form of games that will help keep your child from being too sedentary. Also, the Kidizoom DX2 has a front-facing camera that allows children to take pictures and videos, further stimulating their creativity. Your kid will also enjoy the implementation of AR games that are quite similar to the extremely popular Pokemon Go game wherein you are tasked to capture monsters in the real world.
Pros:

With a similar aesthetic to the Vtech Kidizoom, the Kurio Watch 2.0 also comes with that welcoming and friendly vibe that will surely connect with its younger demographic. It also comes in two interchangeable bands featuring vibrant orange or cool blue. The Kurio Watch 2.0 is marketed as recommended for children ages four to twelve and comes with some nifty features that will surely be appreciated by that age range.
The Kurio also has some similarities with the Vtech Kidizoom in terms of features. The most noticeable would be the front-facing camera that will allow kids to take some snapshots and video recordings. The Kurio 2.0 also has an activity tracker, alarm, timer, and calculator. Where it shines is with the inclusion of a music player, games, and challenges for the kids that will push them to stay active – which is the main goal of the Kurio 2.0. Additionally, some of the games can be played by two individuals that boost overall fun.
Pros:

The WillowWind Kids Smartwatch is not just designed to promote physical health, it also comes with games designed to challenge the mind. The WillowWind features games that encourage quick-thinking and problem-solving besides the standard physical challenges. The watch also features the capability to play songs via the music player app. This smartwatch for kids is recommended for ages four to twelve years old. It also comes with a “Silent Mode” that should prevent any distractions when your kid needs to focus.
The WillowWind Smartwatch also features a front-facing camera that kids can use to capture fun memories – whether it is with a picture or video. The WillowWind also features a sleep quality tracker, a calculator, and the standard alarm and stopwatch functionalities. This smartwatch also stimulates creativity with its personalized wallpapers. Kids will also have up to 14 games available right out of the box. As for safety features, the WillowWind comes with an SOS widget for emergencies.
Pros:

Due to the sleeker design of the Amazfit Bip, it is obvious that this smartwatch is designed for the teenager demographic of twelve years and above. The Amazfit Bip also provides customers with the ability to choose from a variety of color schemes. When it comes to its fitness features, the Amazfit Bip can provide excellent exercises not only for the kid’s body but also their mind.
When it comes to features, the Amazfit Bip certainly has an edge as it features both a heart rate monitor, calorie counter, as well as a built-in GPS. Thus, making this an excellent fitness tracker watch for developing your workout routine. It also offers smartwatch functionalities such as touch notifications once you pair it with your smartphone. This is a pretty robust smartwatch that aims for a more professional level performance than our previous entries.
Pros:

The Amazfit Bip S is the upgraded model of our previous entry, and as such, it delivers a more refined performance and appearance. In terms of aesthetics, the Amazfit Bip S is quite similar to its predecessor with its simple and minimalist design. You can choose from a variety of colors including carbon black, white, Cinnabar Black. The Amazfit Bip S is designed for use by individuals aged twelve years and up.
When it comes to features, the Amazfit Bip S delivers almost identical elements. The Bip S does offer about 10 Sport Modes rather than the standard Bip’s 4. Other than that, the Bip S comes with a heart rate monitor, built-in GPS, activity tracker, sleep tracker, sedentary reminder, and touch notifications. Also, users will have access to a music player and a digital compass. As you can see, the Amazfit Bip S leans towards a more outdoor-specific
Pros:

The upgraded version of the Fitbit Inspire, the Inspire 2 already comes with a heart rate monitor by default. It features a highly detailed heart rate monitor that can give you real-time information regarding pace and distance traveled as well. Also, users will have access to over 15 exercise modes, each activity is goal-based which helps kids to challenge and push themselves past their limits.
Besides having a thorough heart rate monitor, the Inspire 2 also comes with a built-in GPS along with all the standard smartwatch features such as touch notifications, alarms, and activity trackers. The Fitbit Inspire 2 is a more refined version of its predecessor and the price difference is not that glaring as well.
Pros: