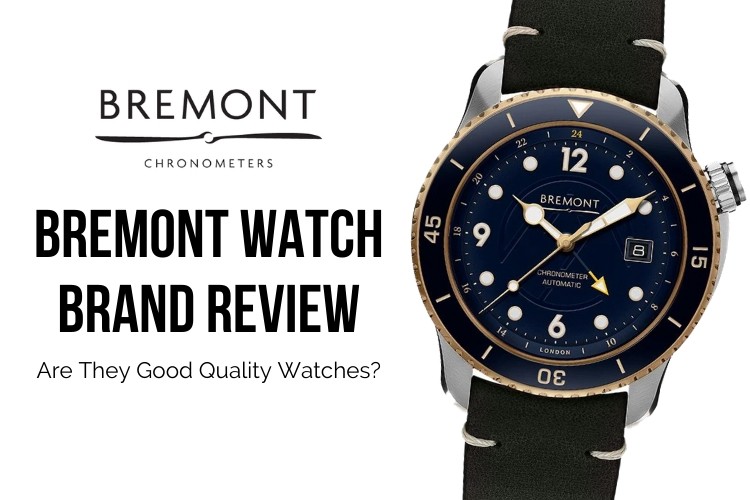 Every Bremont piece remains exquisitely designed and meticulously hand-built in limited numbers. As a result, the watch brand manufactures just 8,000-10,000 watches every year. Currently, the British watchmaking company based out of Henley-on-Thames is now almost two decades into successful watchmaking.

Established in 2002 by brothers Nick and Giles English, the watch brand stands testament to their shared love for historical aircraft and mechanical timepieces.

Their vision looked at precise, reliable, durable and advanced pilot’s watches. However, this success story commenced with a tragic beginning. Euan English, an ex RAF pilot, and father of Nick and Giles took the skies in March 1995. Practicing for an upcoming air display, Euan and Nick together piloted a 1942 World War II Harvard aircraft. Meanwhile, as Giles readied himself for take-off, news broke of the Harvard aircraft crash. Euan English died in the crash and Nick had broken over 30 bones. Nick survived the crash and took to the skies with Giles six months later. However, the devastating event proved to the brothers – life was too short.

The origin of Bremont Chronometers

Subsequently, the idea for Bremont Chronometers sparked. Additionally, Euan English’s passion for mechanical timepieces spurred them further. Similarly, the origin of the brand name ‘Bremont’ too shares a flying story. Nick and Giles found themselves in a 1930s biplane over France as the weather closed in. In addition, the rough running engine forced them to an emergency landing on a French field. The farmer of the field welcomed the brothers and provided cover to the aircraft in the barn, away from the French authorities.

The brothers left promising that the hospitality would never be forgotten. Consequently, their newly formed watch brand took the name of that very farmer – Antoine Bremont.

The brand takes immense pride in the history and quality of British engineering. Over the years, the Bremont brand has pioneered in various advanced technologies in their timepieces. Bremont watches undergo rigorous testing in the field by their partners and ambassadors. As a result, every Bremont watch ensures style and substance.

Furthermore, the brand ensures both sides of the sapphire crystals receive nine layers of anti-reflective treatments and the B-EBE2000 hardening technology. Therefore, making Bremont pieces seven times harder and scratch-resistant than competitors according to the brand. Additionally, the brand also accounts for the following technology – TRIP-TICK Case Construction, Anti-Magnetic Faraday Case, Bremont Anti-Shock and Bremont ROTO-CLICK to name a few.

At present, the Bremont Chronometers official website features an array of beautifully designed watches to choose from. Above all, each timepiece reflects the founders’ love for aviation and sophisticated mechanical timepieces. Amongst the many watches on sale, here are the top collections from the Bremont line up.

To commemorate one of the ultimate mountaineering feats, Bremont released the Bremont Project Possible limited edition collection. Bremont Ambassador, Nirmal ‘Nims’ Purja MBE successfully climbed the 14 tallest mountains on Earth in 2019. Most importantly, he did it in under seven months breaking the previous record of nearly 8 years. Therefore, to mark this incredible feat of the human spirit, Bremont released two limited edition watches under this collection. Limited to just 300 pieces, this collection draws inspiration from the equally celebrated Bremont Supermarine S500.

Each timepiece features GMT functionality and a Bronze uni-directional rotating bezel, the latter, the first time in Bremont’s history. In addition, as a tribute to Nims himself, the heights of the peaks he conquered find themselves engraved on the back of the watch. Both watches require a deposit of GBP 1000 to reserve the timepiece for purchase.

Bremont is the official timekeeper for both England Rugby and the Twickenham Stadium. This unique collaboration with the national team reflects both the team and the brand’s shared values of durability, precision, and technical ability. To mark this collaboration, Bremont will release the Bremont Rose watches in time for the Guinness Six Nations 2020.

These special edition watches carry ‘ENGLAND’ inscription on the dial as opposed to ‘LONDON’ as part of all other collections. Additionally, the steel chronograph hosts two sub-dials embossed with the symbolic England Rose. To reflect the colors of St. George’s Cross, the watch holds blue steel hands and a red second hand. Likewise, the rear carries an engraving of the England Rose and the words ‘Swing Low’. Based on the popular ALTI-C model, the Bremont Rose comes with either a leather strap or a bracelet option. To pre-order the Bremont Rose collection, click here.

One of the greatest stories in aviation history is that of the H-4 Hercules or the ‘Spruce Goose’. Legendary American aviator Howard Hughes took off in the behemoth for its maiden and only flight on 2nd November 1947. As a watchmaking company inspired by the love of aircraft, Bremont released the H-4 Hercules collection as a tribute to the largest aircraft ever.

Consequently, the Steel, Rose Gold and Platinum watches came into being. Given that Bermont makes mainly limited editions, the Steel model numbered at 300 pieces and the other two more expensive models limited to just 75 pieces. The design is a reflection of the 1940s flying boat. For instance, a propeller design made of actual birchwood from the iconic plane sits in the rear of the watch and carries the inscription ‘Spruce Goose’.

These limited edition watches need to be pre-ordered and a portion of the proceeds will be donated to the preservation of the aircraft at the Evergreen Aviation & Space Museum in Oregon, USA.

For music lovers, this collection is the Holy Grail of Bermont.

Bremont collaborated with the legendary songwriter, producer, and Rolling Stones guitarist Ronnie Reed to create 47 exclusive and unique watches. 1947 is a nod to the year the artist was born. Ronnie Reed himself individually hand-painted every watch while on tour with the Rolling Stones.

Moreover, each watches hosts a special Vaucher Manufacture Fleurier Movement with moon phase complication. The case itself is an exquisite 18-carat white gold, 42mm one featuring Ronnie Reed’s signature in the rear. However, the website currently only features 16 timepieces with some listed under ‘pre-order’ and the rest under ‘make an inquiry’.

Taking from their own experience and love for flying, Nick and Giles English worked toward developing the ultimate Pilot’s watch.

Pilot watches form a core segment of the Bremont Chronometers and are fine examples of precision, accuracy, endurance, and style blending together. Pilot watches also feature limited editions and new releases. Some of the popular names under pilot watches include the ALTI series, SOLO series, and AIRCO series.

Over and above the collections enlisted in this article, Bremont Chronometers also have a host of watches under their wing. Limited editions in collaboration with Concorde British Airways, Jaguar, Micheal Wong are also featured on the official website.

The stature of ambassadors and partners over the years is a testament to the brand’s reputation.

Every Bremont piece faces rigorous on-field testing in touch conditions and over harsh terrain. Jaguar, British Airways, Isle of Man TT, The Boeing Company, England Rugby, Henley Royal Regatta, Martin-Baker are just a few of the names the brand partners with. The ambassadors of Bremont push the envelope with on-field testing.

Moreover, the watchmaking technique, the quality of components and style warrant the pricing and fanbase. Consequently, the British brand has received numerous awards including the 2019 WatchPro British Watch Company of the Year.

Is Bremont A Good Watch Brand?

As with every watch brand, Bermont draws mixed reviews. Although, the brand is mainly criticized for its expensive pricing, watch aficionados stand up for its superior quality, durability, and high performance. Watch forums commend the brand’s dedication to manufacturing in-house components and come with high regard to their customer service post-sales. Moreover, watch enthusiasts who have met the founders sing praises of their commitment and love for watchmaking, which in itself is a testament to the brand value.

Another possible reason the brand attracts a lot of criticism is due to poor marketing done a few years ago. The brand advertised engineering all components in-house, but then keen observes called them out for using quartz ETA movement. For which, the brand issued an apology quoting that the advertising went wrong. Nevertheless, the brand still holds a superior footing over its pioneering technology, accuracy, and ability to withstand extreme conditions. While Bermont often draws comparison to Rolex and Omega for its high grade, Bermont built itself a loyal customer base within just two decades.

Having said that, there is no definite answer to whether Bermont is the perfect watch brand. We suggest in all our brand reviews that factors like budget, usage, functions, history and watch-making technology – all factor in while deciding a watch. If you are looking for an everyday watch, then Bermont is probably not the right choice. On the other hand, check out Bermont if you don’t mind spending big bucks for a highly functional watch that will stand the test of time in the years to come.

Where To Buy Bremont Watches?

Bremont timepieces are available for purchase on their official website. Here is more information on the brand’s delivery and returns policy.

However, do note certain watches require either a deposit or pre-order. You can also pick up your Bremont timepiece physically from a Bremont Boutique or from an authorized dealer. Bremont Boutiques are currently in Mayfair, City of London, Canary Wharf, New York, Hong Kong, and Melbourne. To look for an outlet near you, check the ‘store locator’.

Shoppers in the US can find Bremont watches at Jared.

Shop online for Bremont watches on jurawatches.co.uk, Beaverbrooks and on Goldsmiths.co.uk,  these UK retailers have monthly payment options which make the price tag a little more manageable.

You can also find new and pre-owned Bremont watches on eBay.

Where Are Bremont Watches Made?

Bremont Chronometers prides itself as a British watchmaking company. Adding to the rich history of the British watchmaking industry, the brand set up its headquarters in Henley-on-Thames, South Oxfordshire. The oak framed building is purpose-built for watchmaking. While the brand uses the ETA movement, all other key components undergo both assemblies and finishing in this facility. Most importantly, the brand’s long term vision aims at reinvigorating watchmaking expertise in the UK.

In the same vein, the brand set up a parts manufacturing facility in 2014 to produce case and movement components. This facility focuses on building in-house watchmaking knowledge with some Formula1 experience in the workforce.

A new watchmaking facility will be opening doors in 2020. You can also participate in a competition and win two tickets to attend the opening of the new facility with the founders, Nick and Giles English.

Every handbuilt Bremont timepiece comes with a three-year warranty. Ensure to register your purchase on the Bremont website under ‘customer watch registration‘. For further queries on the warranty, you can contact Bremont under ‘Contact Us‘.

In addition, Bremont also recommends a maintenance service every three to five years. Services for almost all watches occur at the Henley facility by authorized and Bremont certified watchmakers. For the warranty to hold, the service must be done by a member of this team. The service includes a new two-year warranty on the watch. For more details on servicing and repairs, visit the website’s FAQs. To send your Bremont piece for either service or repair, contact the nearest Bremont Boutique or an authorized dealer.

Please note that the warranty is valid only when purchased from either the official website or an authorized dealer only.