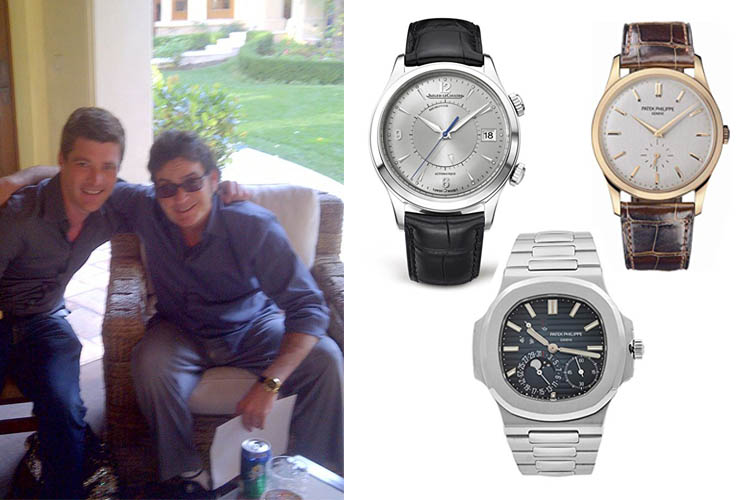 Image Credit: Winningtv via Creative Commons
Charlie Sheen, born Carlos Estévez, is an American actor most commonly known for his performance in the television sitcom Two and a Half Men. He also starred in another comedy series, Anger Management. He also has several movie appearances in the 80s and 90s such as in Wall Street, Major League, Navy SEALs, The Three Musketeers, and Terminal Velocity.
Sheen’s acting career started in the teen drama, Red Dawn. He landed his first major role in 1986 in the drama Platoon. By 2010, he is already the highest-paid actor in television because of Two and a Half Men.
As an actor, many can’t help but also notice his fashion style, including his choice of accessories. Among the watch circles, his collection of timepieces, the majority of which is from Patek Philippe, is truly admirable. Although he also has some from IWC, Jaeger-LeCoultre, and of course, Rolex.


Considerably the most important piece in Sheen’s collection is the vintage Patek Philippe Moonphase ref. 2438/1. Aside from being vintage, the watch is also very rare with only 65 pieces known to exist, making it a highly valuable timepiece.
This timepiece is built with a 37mm gold case and a black leather strap. Another reason why it has become significant is that it is the first-ever perpetual calendar timepiece that is water-resistant produced by Patek Philippe. It also has a moonphase function and is being driven by a manual-winding movement.


From a vintage piece, let’s move on to a contemporary one. Sheen also has Patek Philippe Perpetual Calendar Chronograph ref. 5970. It is popular among watch collectors because of its 40mm case that is made in platinum. Attached to it is a black leather strap completing the watch’s fine, classy look.
Aside from the perpetual calendar and chronograph functions, the 5970 also features a moon phase and a 24-hour indicator. Powering these is a mechanical manual-winding caliber CH27-70 Q movement with 24 jewels.
Unfortunately, this watch has gone missing after Sheen reported that it was misplaced in his hotel room.
Check out the eBay listings on this link if you wish to have a timepiece similar to this.


Now, this one is a classic. The Patek Philippe Perpetual Calendar ref. 3940 was produced in the mid-80s. Sheen’s watch, in particular, comes with an 18k yellow gold case, a matte silver dial, and a black leather strap.
As the name implies, it features a perpetual calendar, as wells as moonphase, days of the week, and months. All these are driven by a self-winding 240 Q base movement. Moreover, the dial is accented with yellow gold hour indices and dauphine hands.
This eBay listing offers the same Patek Philippe ref. 3940 that Sheen owns.


Another sought-after Patek Philippe timepiece in Sheen’s collection is the Nautilus ref. 5712 with a horizontally embossed gradient blue dial. This particular model was launched in time with the celebration of the 30th anniversary of the Nautilus watch range.
It features a 40mm porthole-shaped case with an octagonal-shaped bezel making it pretty distinctive when worn. It has an analog display with the seconds-tracker at the off-center of the dial. It also has a subdial for the date and moon phase functions and another subdial for the power reserve indicator. The timepiece is powered by a self-winding caliber 240 PS IRM C LU with approximately 48 hours of power reserve.
The good news is, the Patek Philippe Nautilus ref. 5712 is not a limited-edition timepiece. In fact, there are several variants to choose from on eBay.


At this point, perhaps you’re thinking that Sheen seems to prefer Patek Philippe watches with various complications. Not to surprise you but he also has a Calatrava which is ultimately a timepiece of simple elegance. Its round case, stick hour markers, and dauphine hands, along with black leather strap effortlessly make the dress watch so fashionable and perfect for almost any kind of gathering. If you like the look of the, check out these affordable Calatrava look-alike watches.
Wish to have an elegant watch like this? Various Patek Philippe Calatrava models are listed on eBay.

Let’s proceed with Sheen’s watches from other brands, starting with the IWC Portugieser IW545407. It is also a simple yet elegant watch like the Calatrava. It has a 44mm round stainless steel case and a black leather dial. The dial is plain black with silver-toned Arabic numeral markers, and pencil hands. It also has a railway minute tracker around the dial and a subdial at 6 o’clock for the second tracker. This timepiece is powered by an IWC-manufactured manual-winding caliber 98295 movement with a 48-hour power reserve.


The Jaeger-LeCoultre Master Memovox looks like a simple dress watch. Yet, it boasts of an alarm function that uses the classic sound of a school bell.
Jaeger-LeCoultre Master Memovox is a silver-toned timepiece with a stainless steel case and a black leather strap. The dial is also silver-toned, including the hour markers and hands. It also has a date function at 3 o’clock.
The model listed on Amazon comes with a solid caseback although there are other variants that have an open caseback showcasing its automatic self-winding movement.


Then, of course, the Rolex. In the TV sitcom Two and a Half Men, Sheen frequently wore his Rolex Yacht-Master ref. 16622. It is built with a platinum case and bezel attached to a stainless steel Oyster bracelet. It has a silver dial with an analog display and a date function at 3 o’clock. It also comes with a screw-down crown allowing the watch to be water-resistant up to 100 meters.