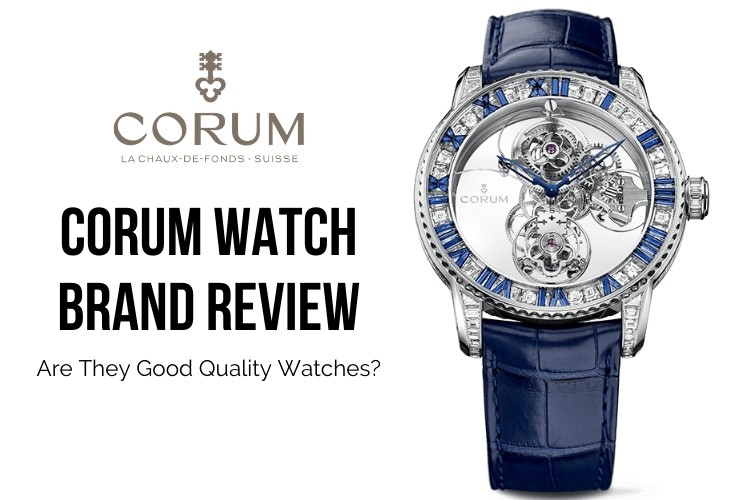 Corum is a Swiss watchmaker that has been around since 1955. This brand is known for its innovative watches—bold, elegant designs that continue to be popular today.
If you’d like to know more about this luxury brand, read on. This article will let you in on some of the most important things to know about Corum like its history, collections, and reputation. We’ll also give information on where you can purchase Corum watches.

The company was founded in La Chaux de Fonds, a town in the Swiss Jura mountains discovered in 1656, which became a popular location for the watchmaking industry (and later became a UNESCO World Heritage Site).
Since 1955, the House of Corum has been located in La Chaux de Fonds. The company is currently owned by Eterna and Hong Kong-based Citychamp Watch & Jewellery Group Limited.
One of the first watches produced by the brand is the “Chinese Hat” which has a pyramid-shaped bezel that evoked the same shape as the hats worn in China at the time.
Another is the Admiral (which first came out in 1960), a square watch with an engraving of a sailboat at the back. There’s also the Coin watch, released four years later, which is equipped with an ultra-thin movement set in a gold coin.
Corum has four collections: The Admiral, Golden Bridge, Bubble, and Heritage. We’ll take a close look at each of these below, and talk about some of the brand’s most popular models.

As mentioned above, the first Corum Admiral watch was introduced in 1960. This watch easily became one of the brand’s most popular models, and according to the Corum website, paving the way for the company’s success.
One of the things that inspired the collection is sailing. The Admiral’s Cup race took place is 1957, and the first watch was introduced in 1960. The current collection has a wide array of models, all of which have a similar look (it no longer has the square shape that was first released). Today’s Admiral collection has a dodecagonal (12-sided) case, with different shapes, materials, and movements).
One popular model is the automatic Admiral AC-One 45 Tides, a 45mm watch with a titanium grade 5 case, with a double anti-reflective sapphire crystal. The first Admiral Tides was released in 1993 and was powered by the exclusive Corum movement CO277, with up to 42 hours of power reserve. This watch also has the same movement, as well as information on the lunar cycle, and times and strength of the tides. The dial is brass, with features like a white superluminova dauphine hour and minute hands and seconds baton hands with a Corum key design.
The collection also has smaller models, such as the 38mm Admiral Legend 38, which has a CO 082 automatic movement and stainless steel, 5N 18kt rose gold case. This also has a version with diamonds on the case with a white alligator strap.

This is arguably one of Corum’s most unique watch collections. The Golden Bridge Collection is composed of watches with four sapphire sides that show an intricate linear movement. This avant-garde watch has the movement placed on the center of the transparent case—”a perfect miniature version of the signature Californian landmark,” according to Corum.
The Corum Golden Bridge Round 43 (as in 43mm), this watch has a CO 113 hand-wound movement, which the wearer would be able to get a 60° view because of the open case. This watch has models with an 18k rose gold case, with or without diamonds.
There are also rectangular versions, like the Corum Golden Bridge Rectangle (29.50 x 42.20 mm), with a white gold case, an alligator bracelet. This design has been used by Corum since the 1980s. There’s also a rose gold version.
The recent models were refined by designer Dino Modolo, a watch powered by the CO 112 hand-wound movement and is the only watch in the market with an in-line baguette movement, which has parts stacked in a column shape. This line also has tourbillon watches (a tonneau-shaped Corum Golden Bridge Tourbillon Panoramique), which has a Featuring 360° visibility, appearing as if it’s weightless at the center of the watch.
For those who are looking for a smaller size, there’s the Miss Golden Bridge, a more feminine model with a 21.30mm x 43.99mm case made with 5N 18kt rose gold. This one’s available with both a rose gold and leather bracelet and has versions with diamonds on the case.

The company refers to the Bubble Collection as “Corum’s fun timepieces.” A Corum Bubble watch, which is is oversized with a large crystal, was introduced in 2000 and was available for around five years. It made a comeback in 2015 after the company continued to receive inquiries even after a decade of not having any new releases.
This collection shows that Corum can produce playful designs, retaining accurate movements. One of the watches from this like includes the Bubble 47 Central Tourbillon, a 47mm watch with a domed titanium case and a brass dial, with a vulcanized rubber bracelet. This model runs on the CO 406 Automatic movement with up to 65 hours of power reserve.
The Bubble is also the collection that the brand is able to incorporate pop culture designs. The Big Bubble Magical Elisabetta Fantone, for instance, is a 52mm piece with a Salvador Dali design on the dial and a vulcanized rubber bracelet. There are also a number of models with a skull design, like the Big Bubble Magical 3D Skull, a 52mm watch with a titanium grade 5 with a black PVD treatment case, and a vulcanized rubber bracelet. This watch does not have hour/minute/second hand markers—instead, the time is marked by red circles on the dial.
The collection also includes a collaboration with DJ and composer Matteo Ceccarini. The Corum Big Bubble Magical 52 Anima is an automatic watch with a 52mm case and a vulcanized rubber bracelet. On the dial is an eye design (or this, and there are minimalist round markers on the outer layer of the watch. A similar model is the Corum Big Bubble Magical 52 Earth.

The Corum Heritage Collection is composed of watches that reflect the brand’s history and creativity.
This collection includes the famous Coin watch, which watch was released in 1964. The watch has a $20 Double dial and became popular with prominent figures (this article by Watchtime mentions that seven American presidents have reportedly owned a Coin watch). Powered by a CO 082 – Automatic with a 42-hour power reserve, this watch has a 43mm yellow gold case and a dial with the American Double Eagle gold coin. There is also the unique engraved model by artist Aleksey Saburov, who created “hobo coins,” which are coins that are reworked by carving with a new design. This watch, according to this article, was presented by Saburov and Corum in Baselworld 2018.
The Heritage Collection also includes the Heritage Eleganza line, which has a feminine style. According to Corum Ceo Jerome Biard, the idea behind Eleganza was “to create a model that was both precious and contemporary.” Fitted with the CO 254 Automatic movement, this is a 40mm watch with diamonds on the bezel and dial. There’s a total of six Eleganza models and colors to choose from.
One of the newer models from the Heritage collection is the Heritage Corum Lab 01 line of watches, which have an experimental style and aesthetic, unlike what the brand has done with its classic Coin and Golden Bridge collections. These watches have a barrel-shaped titanium case (39.89mm x 55 mm), a CO 410 Automatic movement, a sapphire crystal, and an open-worked dial.

Corum is respected by watch collectors and aficionados. The luxury brand is known all over the world for its high-quality watches and limited-edition releases, with the $20 Liberty Eagle Coin watch being one of the most popular and sought-after models.
In 2013, the company was bought by Hong Kong-based Citychamp Watch & Jewellery Group, which also runs two of the biggest watch brands in China (Rossini and Ebohr).
In a 2016 interview with Corum’s Davide Traxler, the former CEO said that Corum was growing in Asia, in countries like Hong Kong, Singapore, and Malaysia.

Is Corum A Good Watch Brand?


Corum is a well-regarded watchmaker known for its unique watch designs with impressive technical features. The company combines “creativity and boldness” as two of its guiding principles in watchmaking.
Corum is a regular topic on forums such as this one, with many agreeing that one of the brand’s best releases is the Golden Bridge, which has a stunning design. There are mixed reviews of the more modern and daring models like the Bubble collection.

Where To Buy Corum Watches?

Where Are Corum Watches Made?

Since 1955, the company has been making watches at La Chaux de Fonds in Switzerland.

All Corum watches undergo rigorous quality control according to Swiss watchmaking standards. The Corum website recommends that a Corum watch undergoes an overhaul every three to five years and that the water-resistance be checked by an official dealer or Corum service center.
The warranty for a Corum watch is two years from the date of purchase. This covers manufacturing defect—repair is valid if the watch was bought from an official dealer. Wear and tear and damage due to carelessness are not included in the warranty terms.
To claim the warranty, Corum customers need to presented to an authorized service center with a warranty card with a date, stamp, and signature of the dealer (these are available on the website).
To learn more about the brand’s warranty policy, you can visit their official website.