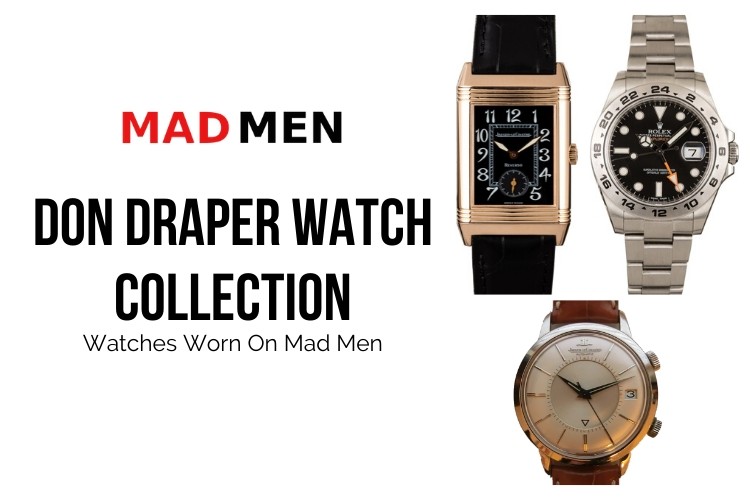 Award-winning TV series Mad Men, which is set in the 1960s, revolves around the mysterious and talented ad man Don Draper (played by Jon Hamm).

This is a period drama that has won awards in the course of its seven seasons. Some of these awards were for costume design, which has received praise for the attention to detail and accurate representations of the period’s design and fashion.

One of the costume elements that caught the audience’s attention was the watches. The dapper and sharp Don Draper is seen wearing different popular watches of the era. The show progresses with Don gaining success in his advertising job, and so does his choice of accessories—watches that were popular during the portrayed eras.

The costume designers of the show used elements such as clothes and watches as representations of Don’s (as well as the other characters of the show) career. In this article, we’ll take a closer look at these watches and go back to the episodes where they appeared. We’ll also talk about the watch themselves, discussing things like history, similar models, and where you can buy them.

Mad Men also features other watches worn by other characters, but this one will solely focus on the models worn by Don Draper. We’ll arrange them chronologically, and also tell you more about their history.

This watch first appeared in Mad Men’s first season. The Jaeger-LeCoultre Memovox is the first watch that watch-loving viewers noticed Don wearing. This watch is striking yet simple, establishing that Don is a man of good taste.
The Swiss-made Memovox was first introduced by the brand in the 1950s. The name is a portmanteau of Latin words “Memor” (meaning “remembering”) and Vox (meaning “voice”) – “the voice of remembering.”

The watch was phased out before the end of the decade. What makes this watch special is its alarm feature. When it was released, it was the first automatic watch to have an alarm. The watch had a number of versions: the first Memovox was equipped with Calibre 489, and in 1956, the brand replaced it with Calibre 815. Then, the company released Calibre 825, which became very popular, had a date module—check out Hodinkee’s full review of the watch here.

There were a number of Jaeger-LeCoultre models inspired by the Memovox—one of these is the Memovox Deep Sea, wherein the brand combines its alarm feature in a water-resistant watch. There’s also the Jaeger-LeCoultre Polaris, which is a dive watch that has an alarm mechanism, with an internal rotating bezel.

In 2010, the Memovox made a comeback. The company released the Jaeger-LeCoultre Master Memovox, fitted with a Calibre 956 movement.

This watch first appeared in Mad Men’s second season. The Jaeger LeCoultre Reverso is pricier than the Memovox, showing that Don is enjoying success and also earning more.  This was the time when he was made a partner by his agency Sterling Cooper.

The Jaeger LeCoultre Reverso, a polo watch, was released in the early 1930s and continues to be popular today. This watch has an Art Deco-inspired design—an elegant rectangular case and a white dial. In order for polo players to protect the glass (a common problem with watches at the time), Jaeger-Le Coultre created the timepiece in such a way that one can flip the case to display its caseback.

The model that Don wears on the show is the Jaeger-LeCoultre Gold Reverso Classique, which was a popular luxury watch at the time. Simple and elegant, the model has a brown leather strap and yellow gold case. This model has an 18-karat case, which can be swiveled to show an engraved image —Betty, Don’s wife had the watch engraved in Season 2.

This watch made many appearances on the show—Don continued to wear this watch in the seasons that followed.

Read more about the rich history of the Reverso here.

The watch became so popular that in 2012, Jaeger LeCoultre released the Reverso Ultra Thin watch, a model designed for the show. This tribute watch was released as a limited-edition of 25 pieces and has a caseback with an engraved “Sterling Cooper Draper Pryce” embossed logo. The watch also comes with a personalized commemorative letter from Roger Sterling (a “gift” to the new watch owner), reproductions of Jaeger-LeCoultre advertisements, and a copy of Sterling’s book “Sterling’s Gold.” The watch is also autographed by Matthew Weiner, the show’s creator. This article by Hodinkee shows photographs of the watch in Sterling’s actual office.

See these affordable Reverso watch alternatives here, while no one can really replicate the unique JLC design these at least have a similar style primary watch face.

In Mad Men Season 4, Don upgraded his watch collection again, this time with a Rolex. It is during this time that one could notice his fascination for luxury sports watches. During this season, he was working on a Rolex account, so it was only fitting that he uses his client’s product.

The model that Don wears throughout the season is a stainless steel Rolex Explorer with a black dial.

The Rolex Explorer, though sometimes overshadowed by the more popular Daytona and the Submariner, is a favorite among many watch enthusiasts. First released in1953, this timepiece was made for mountain expeditions—the company launched the Explorer line to commemorate the successful expedition of Tenzing Norgay and Sir Edmund Hillary in Mt. Everest. Rolex has released a number of versions of this watch over the years, but the general design remained the same.

You can read more about the evolution of the watch in this comprehensive article.

The watch has luminous markers, which is a contrast to the black dial, allowing the wearer to use the watch even in harsh weather conditions.

The accuracy of this watch for the period, however, has caused some debate. It has been said that the watch could have been very difficult to get during the early to mid-1960s in America, as Rolex bracelets were still not very popular in the country then (the Rolex explorer was first released in 1953). Some sharp-eyed audience also pointed out that the sapphire crystal on Don’s watch is a feature that was not introduced by Rolex until the 1970s.

An article on Bob’s Watches mentions that Don’s Rolex Explorer could be more current than the show’s period. This means that the watch is an anachronism—a watch placed in a period where it does not fit. Others also think that this could be a marketing strategy; that Rolex could have given the watch a lot of screen time for promotion.

If you like the look of this watch but not the price tag – see these affordable Rolex Explorer alternatives.

In the show’s fifth season, Don starts wearing an Omega Seamaster DeVille, an elegant analog dress watch with a black dial, a black strap, and a date window at 3 o’clock.

During this time, the watch design was considered stylish and unconventional, as it had a dark-colored dial (most of the popular luxury watch models during the period had white versions). The 34mm watch has simple yet elegant stick indexes and baton hands.

As the name suggests, the Omega Seamaster was developed by the brand as a diver’s watch. Included in this collection is the Seamaster DeVille, which is one of dressier models (the DeVille was eventually re-released as a separate collection later on).

An article by Fratello Magazine says that the model Don was wearing was probably the automatic caliber 562 or 563, which are the calibers that Omega produced during the early to mid-1960s.

Don wears this watch throughout the fifth season. An Omega is an elegant watch to have, but after wearing luxury watches like Jaeger LeCoultre and Rolex, this seems like a more toned-down model for Don, something that could symbolize maturity and age—a simple yet powerful watch to go with his larger-than-life confidence.

The Seamaster DeVille has a simple and subtle look, which made it continue to be popular in the decades that followed. In the rest of the show’s run, Don is seen wearing his DeVille until Season 7, the last of the series.

A bit of trivia: Jon Hamm was seen wearing the same watch when he was featured on the cover of Rolling Stone Magazine in 2013.

During the show’s sixth season, Don was also spotted wearing what some think is another Seamaster Deville, a yellow gold case with another black leather strap.