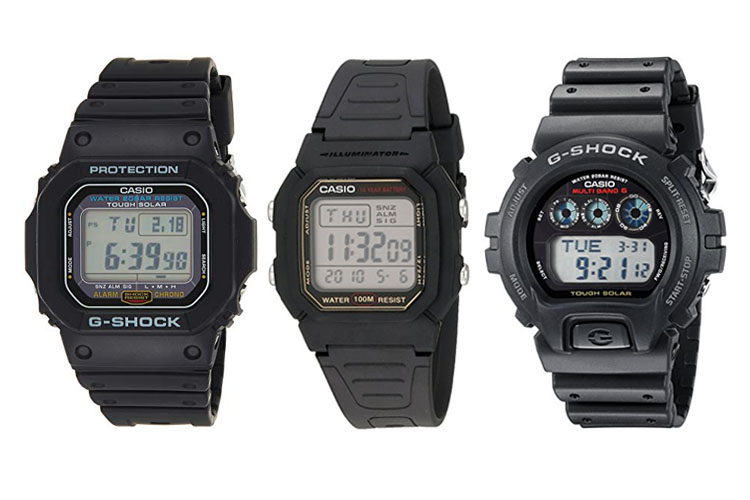 To the layman, it may seem that some Casio and G-Shock watches are pretty much the same. But this similarity is only skin-deep. In fact, these two have such significant differences in terms of performance. While G-Shock is under the Casio umbrella, their watches are technically two vastly different brands with their own strengths and weaknesses. In this article, we will be taking a look at the intricacies and the key differences that separate a regular Casio watch from a G-Shock watch.
Which is better suited for your needs and your style? To determine that, we will be going through each of the watches features both brands offer. Afterward, we will be directly comparing specific models from both of their catalogs in a head-to-head matchup.

As we have stated earlier, your regular Casio watch and G-Shock watches may appear quite similar to the uninitiated. If you know where to look, then these two brands can’t be more different from one another. To help you distinguish between the two watch brands better, we have taken some of their most notable watch features and pitted them with each other.

This is possibly the most significant difference between normal Casio watches and G-Shock watches. G-Shock is known for its incredible durability so we can expect it to have the advantage over regular Casio timepieces. Basically, G-Shock’s moniker as the ‘toughest watch in the world’ is well-earned and few, if any, another brand comes close to what G-Shock has achieved in terms of durability.
Overall, there is no way that standard Casio watches can compete with G-Shock in regards to toughness. It is no stretch to say that a five-year-old G-Shock watch will look to be in a more mint condition than a three-year-old Casio timepiece.
G-Shock watches also tend to utilize some of the best materials along with impeccable craftsmanship when it comes to developing their watches. A perfect example of this is with its dial window. G-Shock watches feature scratch-resistant glass windows. In fact, standard G-Shock watches don’t even use premium quality glass such as sapphire crystal. Most of their more affordable timepiece only use the cheaper mineral crystal glass. However, it comes with an additional coating to enhance its scratch resistance considerably.

Another huge difference, pun not intended, is with the overall bulk of their cases. G-Shock is synonymous with their tank-like design which can be seen as a downside for some. The bulky build of G-Shock watches can feel cumbersome and uncomfortable for those with smaller wrists. Fortunately, G-Shock does have some sleeker models in their catalogs such as the DW5600 models and the Baby-G series. These watches tend to stay around the 45mm diameter size as compared to the typical 50mm and above G-Shock models.
On the other hand, Casio tends to follow the traditional watch design. Regular Casio timepieces all stay within the 45mm diameter size. So, Casio watches tend to be more accessible to a wider customer base than the large G-Shock watch models.

Despite the large build of G-Shock watches, it tends to restrain its weight thanks to its use of resin material for its case and bands. That said, G-Shock watches still offer more heft than Casio timepieces. Generally, G-Shock watches are still quite comfortable as it is only in its size that it looks cumbersome. Overall, Casio watches will deliver a slightly better comfort as its design is based on traditional timepieces as compared to G-Shock’s modern and more bombastic take – giving regular Casio watches that added sense of familiarity.

This is one of the deciding factors in regards to choosing between a regular Casio watch and a G-Shock watch. G-Shock watches tend to incorporate a modern design and is far from looking like your typical classy dress watch. It is also larger and has a more mechanical build. As for Casio watches, it tends to be more flexible in its design and can be worn for all types of occasion. The digital Casio watch, which features a square-shaped case, even captures that retro look that will appeal to collectors and enthusiasts.

Now, let us take some of G-Shock’s and Casio’s most similar timepieces and see how each fair against one another.

While G-Shock is generally known for its large and rugged watches, the G5600E-1 model takes a more subdued approach and a sleeker square retro design. This is a watch for those who like wristwear that can be worn for all occasions while maintaining its signature G-Shock toughness. This watch is operated by a Japanese quartz movement with a digital display. The 47mm diameter case is made from resin and incorporates G-Shock’s impeccable build. To help improve comfort, the G5600E-1 utilizes a resin strap which adds to its overall comfort.
The LCD display is well-organized with all the important details in perfect order, nothing overlaps the other and the wearer won’t feel overwhelmed by the information on display. In addition, it is equipped with Tough Solar technology which allows wearers to charge its batteries via sunlight or artificial lighting. The aesthetics of the G5600E-1 is generally laid back when compared to other bold G-Shock watch models. Due to its more subdued appearance, this particular solar-powered watch can be worn for all types of occasions.

The Casio W800HG-9AV is a well-rounded digital watch. It features a compact 41.5mm case and a hard plastic crystal dial window. Within the square-shaped case is a Japanese quartz movement that operates its digital display. The W800HG-9AV is quite simple in its build with the basic timekeeping and day/date/month functionality in tow. Despite the entry-level price tag, the W800HG-9AV does come with its own bag of tricks.
Notable features implemented into this digital watch includes a World Time feature that holds up to 32 time zones and up to 48 cities. It also comes with a stopwatch (1/100), a countdown timer (1/10), and up to 5 daily alarms. As you can see, its features are almost identical to that of G-Shock’s, with the absence of the latter’s outstanding level of durability.
The Casio W800HG-9AV also comes with 100-meter water resistance and boasts a battery life of up to 10-years. Overall, if you are looking for a decent digital watch that has all the basic functionalities at an incredibly low price, the Casio W800HG-9AV might just be for you.

Overall, the G-Shock G5600E-1 simply outperforms the Casio W800HG-9AV despite being similarly priced. While larger, G-Shock watches tend to be more polished in terms of performance and design. It also tends to deliver better timekeeping accuracy and dependability. With its more retro-look, the G5600E-1 is also more flexible and can be worn both for casual and formal occasions.

G-Shock is also well-versed in implementing atomic timekeeping movement into most of their watch models. A prime example of this is the GW6900-1 Tough Solar Atomic Watch which also utilizes G-Shock’s extremely durable build. The GW6900-1 model features a gear-like stainless-steel case and uses mineral crystal windows to protect the digital display. It features multi-band 6 atomic timekeeping and Japanese quartz movement for its digital display.
This G-Shock timepiece also incorporates the classic three-ringed design of early G-Shock models. If you love retro-looking watches or simply love the classic G-Shock aesthetic, then the GW6900-1 will complement your personal style. You can also rest easy knowing that this watch carries that signature shock-resistant build and multi-functionality on its sleeves. In addition, the GW6900-1 also comes with Tough Solar technology and all the standard timekeeping features present in G-Shock watches.

The Casio WV558A-1AVCR Waveceptor watch edges out the G-Shock GW6900-1 in terms of appearance in our opinion. The Waveceptor’s sleeker appearance and sporty design make it a great companion for athletes or those who simply enjoy participating in physical activities. The Waveceptor also took some cues from G-Shock with its solid shock-resistant build. The silver-tone accents on the case give it some nice aesthetic beats as well.
The WV558A-1AVCR features a 44mm stainless steel case with a mineral window. Within the sleek case is a Japanese quartz movement and multi-band 6 atomic timekeeping with a digital display. Extra features include a World Time (48 cities) and an automatic EL backlight for enhanced visibility in low-light environments. The construction of this Waveceptor timepiece also delivers a decent 50-meter water resistance which allows it to withstand brief immersions during recreational water activities such as swimming.

G-Shock once again takes the ‘W’ in this round thanks to its solid construction and functionalities. While the Waveceptor is definitely not that far behind, the GW6900-1’s impeccable toughness and 200-meter water resistance is more than enough to secure the victory. However, we do want to point out that the Waveceptor most certainly has the advantage in the aesthetics category with its sleek black and silver-tone case.

The biggest difference between regular Casio watches and the G-Shock series is in durability. This is not saying much as G-Shock watches are considerably tougher than most timepieces in the market. However, for everyday use, Casio watches can be just as dependable. G-Shock watches also have a default 200-meter water resistance design (100-meters for the Baby-G series) while standard Casio watches tend to revolve around the 50-meter mark. Basically, when it comes to features, regular Casio and G-Shock watches can go step-by-step. It is in the durability department wherein G-Shock surpasses the former on all fronts.