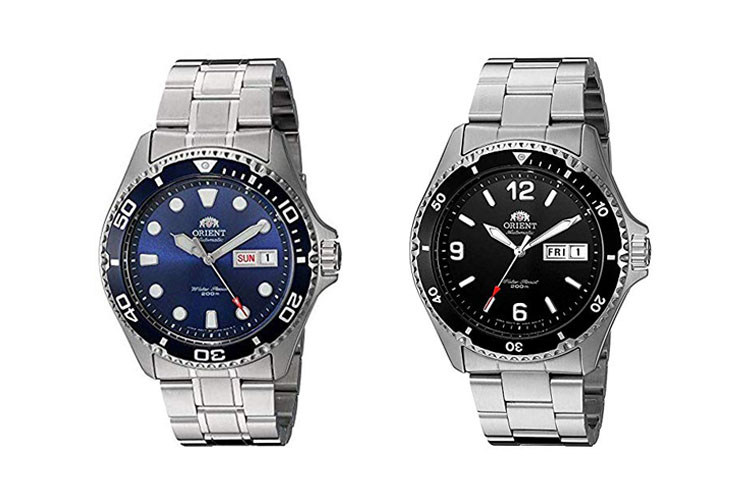 The Orient watch brand has two of the most recommended dive watches in the entry-level market. The impeccable build of these two Orient dive watch makes them highly sought-after. The fairly reasonable price tag also makes the Orient Ray and Mako quite appealing for the general watch buyer who wants a timepiece with a certain level of reputation and prestige behind it.

Both Orient dive watch models have near-identical capabilities. However, it is in the aesthetics wherein the two deviate from each other.

Orient’s first legitimate success in the niche dive watch market was with their Mako automatic dive watch. The success of the Mako then helped introduce the Ray models, which is a redesign of the Mako series.

So, if you are on the fence in choosing between Orient Ray and Orient Mako, then you have come to the right place. In this article, we will go into a deep dive with the two remarkable and stylish dive watches from Orient and figure out which of the two suits you the best.

When it comes to caliber movement and watch resistance, note that both the Orient Ray and Mako models generally use and offer the same performance. As we have stated earlier, the Ray is a redesign of the Mako, which means that the most notable difference is both timepiece designs.

The Mako utilizes a sleeker dial design with its Arabic numeral hour markers compared to Ray’s more superficial round markers. The bezel also features minute markers, making it easier to align the bezel to the dial when you are diving.

Both the Ray and Mako models also provide excellent luminosity, which is a crucial factor in dive watches.

Besides the noticeable difference in the case’s aesthetics, both Ray and Mako models also incorporate subtle differences within the dial’s components. For example, the Orient Ray has bolder or thicker analog hands than the Mako.

As for the watch movement, we will be looking at the second generation Ray and Mako models as both feature an upgraded mechanism from their predecessors. The Ray II and Mako II both utilize the caliber F6922 automatic movement.

This automatic movement now incorporates manual winding and hacking compared to the previous version, which only has manual winding. This element makes the Ray II and Mako II significantly convenient to operate and adjust.

When it comes to Orient watches, you can’t have a proper discussion without including the Ray II model. Orient Ray II is one of the brand’s best, but it is one of the best in the entry-level dive watch category.

The Orient Ray II features a 41mm stainless steel case with a solid 200-meter water resistance rating. The Ray II is specifically for marine-based activities, from swimming to scuba diving; this watch is as reliable as you can get with an entry-level diver’s timepiece.

Other notable features include a 120-click unidirectional bezel, luminous round hour markers, bold and stylish analog hands, and a day and date display. Underneath the robust exterior frame is the F6922 automatic movement with up to 40-hours of power reserve.

The bracelet can also be replaced with variant models of the Ray II featuring silicone and NATO straps. Personally, the stainless-steel Oyster bracelet complements the Ray II’s reliable and robust charm the best.

The Mako II features a more modern aesthetic than its counterpart, the Ray II. As such, you can expect the Mako II to have a slimmer design compared to the more robust vibe that the Ray II exudes. The dial also accentuates a cleaner aesthetic with a combination of Arabic numeral and thin baton markers.

Along with the sleek markers is a sword-style analog hand with a luminous finish that tops off the modern aesthetic that Mako II was going for. You will also notice that the bezel has a cleaner appearance with smaller markers that do not take up too much space.

Like the Ray II, the Mako II also utilizes the F6922 automatic movement within its 41mm stainless-steel case. This automatic hand-winding and hacking movement also come with approximately 40-hours of power reserve.

Additional features of the Mako II are its solid 200-meter water resistance and day-date display located at the 3 o’clock position.

The Mako II is a dressier version of the Ray II. If you prefer a dive watch that can also double as a dress watch, then the Mako II is right up your alley.

Overall, comparing the Mako II with the Ray II is like comparing two sides of the same coin. Performance and timekeeping-wise, both Orient dive watches deliver the same level of precision and reliability as both utilize the Orient caliber F6922 automatic hand-winding and hacking movement.

Both models also deliver the same 20ATM (200-meter) water resistance rating in terms of water resistance. Thus, the Ray II and Mako II are nearly identical when it comes to capabilities, with no defining line that can effectively separate the two.

However, it is in the aesthetics wherein we can adequately draw the proverbial line. The Orient Ray II has a more professional dive watch aesthetic with its broader and bolder design. On the flip-side, the Orient Mako II offers a sleeker, modern, and more stylish alternative to the Ray II’s more proficient and rugged vibe.

This section of the article is more of a formality. As discussed throughout this article, Orient Ray and Mako incorporate similar components, with the aesthetic being the main difference between the two.

Here we have the complete details on the specifications for these two outstanding Orient dive watches.