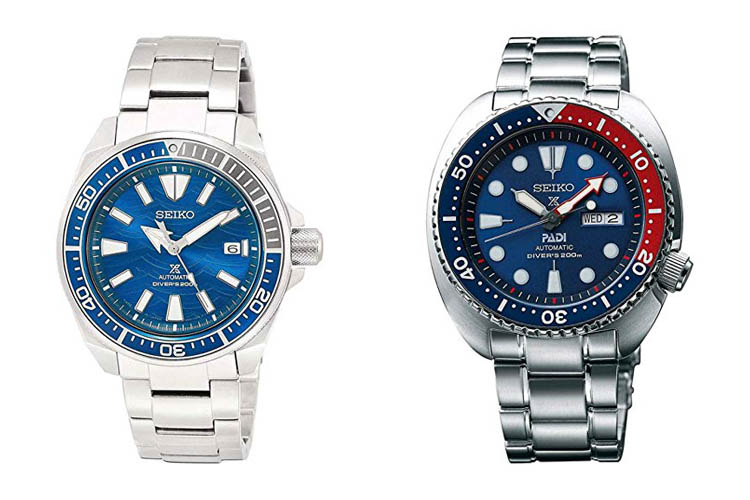 Seiko is a Japanese-based watch company and is one of the most highly respected watchmakers due to their many contributions to the industry. Founded in 1881, Seiko has also built a reputation for developing top-notch timepieces at half the price of its competition while maintaining that signature Japanese level craftsmanship. Primarily known for its quartz movement watches – which is not surprising as it was Seiko who introduced this revolutionary horological movement to the market. Over the years, Seiko has built up a highly reputable catalog of fantastic watches to choose from – covering all facets of the watch market.

In this article, we will be focusing specifically on their dive watch collection. Seiko first tapped into this market back in 1965. After a decade, Seiko revolutionized the dive watch industry by being the first to develop a professional dive watch that has an impressive 600-meter water resistance rating. The Seiko Prospex series has been the flagship watch line of the company when it comes to their sports, outdoor, and dive watches. For this occasion, we will be shining the spotlight on two of Seiko’s most prominent dive watch series – the Seiko Turtle and the Seiko Samurai.

If you are familiar with dive watches, then chances are you have come across or own a Seiko SKX. The Seiko SKX is one of the most well-known dive watches in the market due to its impressive build and reasonable price tag. It is also an ISO-certified dive watch making it incredibly reliable for marine-based activities. However, Seiko has officially discontinued the production line of their SKX series which might sound like a major bummer, but there is a silver lining to this and that is with the expansion of Seiko’s dive watch collection.

Now, we have a slew of options to choose from such as the Seiko Turtle, Samurai, Sumo, and Mini Turtle which are all under their Prospex watch line. Each of these dive watch collections delivers its special twist to the proverbial table. Not only are these notable alternatives, but you can also consider these watch lines as upgrades to the iconic SKX. That said, the keyword there is “upgrade” and it goes without saying that these alternatives to the Seiko SKX also come with a varying price increase. Fortunately, Seiko has not forgotten one of the key factors that brought them to the dance, which is offering high-quality timepieces at a considerably lower price than its competition. Overall, the Turtle, Samurai, Sumo, and Mini Turtle are still relatively more affordable in comparison to other brands.

All of the Seiko dive watch models that we noted above come with an ISO 6425 certification which is basically the “stamp of approval” required for a legit professional dive watch. These watches also feature a hand-winding and hacking mechanism which does make the increased price understandable. For this particular article, we will be doing a side-by-side comparison between the best that the Seiko Turtle and Seiko Samurai have to offer. These two Seiko dive watch brands are currently at the top of the mountain in their particular areas, and it is quite interesting to learn the intricacies that separate the two wonderful watches from each other.

Which one is best suited for your style and needs? Which one has the advantage over the other? Which between the two Seiko dive watch earns the top billing in this match-up? Let’s find out.

Seiko Turtle “Save the Ocean” SRPA21

The Seiko Turtle, while relatively new to the market as it debuted as recently as 2016, has quickly taken up the mantle as one of the best entry-level divers watch available. The Turtle features a uniquely shaped case that takes on the appearance of a turtle shell or a cushion, which is where it got its name from. The Seiko Turtle also exudes a vintage flair to it which definitely adds to the overall style points that this Seiko dive watch delivers. A quick little trivia for timepiece enthusiasts out there, the Seiko Turtle is actually a reissue of the Seiko 6306 watches which were manufactured back in 1976. The Seiko Turtle upgraded its predecessor’s design by utilizing a new movement (caliber 4R36) and ISO-certified 200-meter water resistance.

In terms of appearance, the Turtle SRPA21 features a classic dive watch design with its blue dial with a reflective finish and a red and blue tone unidirectional bezel. This particular Turtle dive watch model is a limited-edition model called the “Save the Ocean” and is one of the best Seiko Turtle watches that you can get your hands on in terms of performance and aesthetics. The Turtle SRPA21 also has a slightly sleeker build than your typical Seiko Turtle models with a 44.3mm diameter case.

As for performance, the Turtle SRPA21 features Seiko’s caliber 4R36 automatic 24-jewel hand-winding movement which clocks an impressive 21,600VPH. This gives the SRPA21 a notably more accurate timekeeping capability than your standard timepiece. This watch movement also provides this Turtle dive watch with a decent 41-hour power reserve. Additionally, the build of the SRPA21 gives it a magnetic resistance of 4,800 A/m and as a dive watch, it comes with an ISO 6425 certification for a 200-meter water resistance rating.

Seiko Samurai “Save the Ocean” SRPD23

Along with the Turtle, the Samurai is another top-tier Seiko dive watch that is among the frontrunners of the brand’s entry into this watch category. The Samurai has several similarities to the Turtle, one of which is that it is another re-release series that initially debuted back in 2004 and lasted up to 2008. The current generation of Samurai dive watches began in 2017 and made some noticeable tweaks to the original’s design, namely, dropping the sword-shaped hands. Other than that, the case design itself was left untouched and retained its sharpish aesthetic.

One element that is present in all of Seiko Samurai models is its rather assertive and professional design. It also has a very prominent crown and bezel that features aggressive angles and patterns that make it worthy of the “Samurai” moniker.

As for the dial, the “Save the Ocean” SRPD23 incorporates a stunning polished blue color tone with ocean wave patterns. Partner the beautiful blue dial with its polished stainless-steel case and you have yourself a genuinely pleasing and soothing timepiece aesthetic. Taking the ocean theme further, the SRPD23 also utilizes harpoon-like hands.

When it comes to the Samurai SRPD23 timekeeping performance, it manages to get top marks on all fronts. This dive watch utilizes the caliber 4R35 automatic manual-winding movement with an analog display. It also comes with a date display over on the 3 o’clock position. This watch movement also provides the SRPD23 a 41-hour power reserve. The case is equipped with a unidirectional bezel, which is a must-have feature in a dive watch. Additionally, the Samurai also comes with an ISO 6425 200-meter water resistance certification.

Now, let us narrow down the strengths and weaknesses of both the Turtle and Samurai dive watches to better paint a clear picture as to which one is most suited to your style and needs.

As you will see from our watch overview as well as our side-by-side comparison down below, the Turtle and Samurai are pretty very similar when it comes to their build.

Mechanically there’s little difference between the two movements used, they are essentially the same in terms of quality, accuracy and jewels. The difference is the date window at the 3 o’clock position, the 4R35 (Samurai) has a date calendar complication whereas the caliber 4R36 (Turtle) has a day/date.

It is in the aesthetics that the line will be drawn. The Seiko Turtle features a unique vintage style that makes it a worthy addition to your watch collection. On the flip side, the Samurai features a more subdued and modern design that allows it to be worn for all sorts of occasions. Every other factor between the Turtle and Samurai is quite similar, making personal preference the deciding factor here.