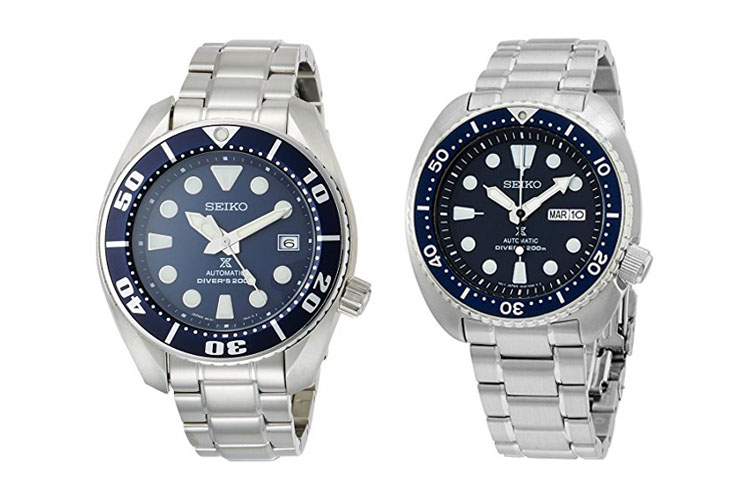 The Japanese watchmaker, Seiko, is one of the most trusted names in the industry. They already have a wealth of excellent watch line selections under their belt that are well trusted in the market. For today, we will be putting the spotlight on two of their most popular dive watch series from the Seiko Prospex line, the Seiko Turtle and Seiko Sumo.

Both the Seiko Turtle and Sumo have near-identical specifications in both design and performance that making it can be difficult to choose between the two. The most noticeable difference is the recognizable case shape of the Turtle compared to the standard round shape of the Sumo.

The Seiko Turtle was first introduced back in 1976 and to this day is one of the most beloved Seiko watch lines in the market. The Seiko Turtle also comes with several limited-edition models such as the King Turtle SRPE39K1 and the Black Series Ninja Turtle SRPD46K.

The Seiko Sumo is relatively new in the market as the first model, the SBDC031 rolled out in 2007. The most distinct feature of the Seiko Sumo is linked to its nickname, the large and bulky build. The case balances out the rather “chunky” appearance by utilizing a smooth aesthetic with its soft edges. Previous generations of the Sumo utilize the caliber 6R15 automatic-winding movement while newer models feature the caliber 6R35 – both of which come with a 50-hour power reserve.

The Seiko Turtle and Sumo, while falling under the same umbrella, are often compared to each other due to several similarities in their overall functionality. While aesthetically different, especially to trained eyes, both the Turtle and Sumo Seiko watch lines still come with several notable similarities. In terms of differences, the case shape of each is a dead giveaway.

The Seiko Turtle features a “turtle shell-like” case, hence, the name – while the Seiko Sumo is just a straight-up large timepiece that is pretty apt for its moniker. Besides the obvious difference in the case design, both the Turtle and Sumo also feature a relatively similar watch movement at first glance.

A further inspection though will reveal that both of these Seiko dive watches incorporate vastly different types of movements. The Seiko Turtle features the caliber 4R36 while Sumo comes with the caliber 6R15. In terms of performance, both of these Seiko watch movements provide near-identical qualities such as manual winding, hacking, and a 21,600VPH (Vibrations per Hour) which makes it more accurate than standard timepieces (18,000VPH).

Another key feature between the Turtle and Sumo is that both come with ISO 6425 certification and 200-meter water resistance. This means that both watches are designed for water-based activities such as swimming, snorkeling, and scuba diving. We will be taking a more in-depth look between the Seiko Turtle and Seiko Sumo. While both may appear identical to the layman, a more meticulous dive into each watch model’s features will highlight certain differences that can shift your preference towards the other.

We will be featuring the SRP773 model as it is the most recognized Seiko Turtle model. The iconic SRP773 features that timeless dive watch aesthetics with its polished silver-tone case and a stunning blue dial.

Featuring the signature turtle-shaped case, the SRP773 brings a subtle tweak to the traditional round case – thus, giving it a unique and notable trait of its own. Another element that is a mainstay in dive watches is the bezel, the SRP773 features a 120-click unidirectional bezel so it has that covered.

The case which employs a turtle shell shape has a diameter of 45mm. Within the uniquely shaped case of the Turtle SRP773 lies the caliber 4R36 24-jewel automatic-winding movement that clocks at 21,600VPH providing it with enhanced accuracy. The caliber 4R36 also comes with a 41-hour power reserve.

Over on the blue-toned dial, we get highly visible luminous rhomboid hour markers and hands. The SRP773 features differently designed hands with the minute hand taking on an arrow shape while the hour hand is somewhat stubby with a needle-like tip. The second hand has a white finish with a black tail at the end.

The SRP773 also has a day and date display which is located over on the 3 o’clock position of the dial. As with most Seiko dive watches, the Turtle SRP773’s crown is positioned over on the 4 o’clock position and is slightly embedded into the case to give it some extra protection. Adjusting via the crown is quite easy and provides a decent level of grip as well.

Additionally, the Seiko Turtle SRP773 comes with an ISO 6425 certification making it a “true” dive watch and offers water resistance for up to 200-meters.

For our Seiko Sumo entry, we will shine the spotlight on what is currently considered by many as the best Sumo model. True to its namesake, the Seiko Sumo SBD033 is quite bulky in its construction. Featuring a polished stainless-steel case measuring 45mm in diameter with a 13mm thickness, the Sumo SBD033 is certainly a watch that might not fit well with individuals with smaller hands. The SBD033 features the classic dive watch aesthetic of a silver-toned case accompanied by a blue dial, which it manages to nail perfectly.

There is also a date display which is located beside the 3 o’clock hour marker. The blue dial is also escorted by stylish and luminous hours, minutes, and second hands – all featuring a broad shape that tapers off towards the point. This gives the dial pointers a sense of uniformity to it that gives it an organized and professional vibe.

Back to the round case, the Sumo SBD033 also comes with a 120-click unidirectional bezel with bold Arabic numeral markers. The threaded edge of the bezel also helps in generating more grip, making it easier to move even when underwater.

Similar to the Seiko Turtle SRP773, the Sumo SBD033 also has its crown positioned over at the lower right corner of the case (4 o’clock) and features a heavily threaded, almost gear-like, pattern to further improve grip.

As for the Sumo SBD033’s watch movement, it utilizes the caliber 6R15 23-jewel automatic-winding mechanism that clocks in an impressive 21,600VPH. The 6R15 also provides the Sumo SBD003 a power reserve that lasts up to 50-hours. Similar to the Turtle SRP773, the Sumo SB033 also has an ISO 6425 certification which allows it to efficiently operate underwater with its 200-meter water resistance.

Both the Seiko Turtle and Sumo have near-identical features in both design and performance that it can be difficult to choose which to pick. That said, we will be compiling a list of the pros and cons of each Seiko dive watch model down below to help you narrow down your search.

The Seiko Turtle and Sumo are almost near-identical, but when it comes down to the wire, the choice becomes somewhat more obvious. Personally, I would go for the Seiko Turtle as it provides more versatility in that it is both an excellent dive watch and a casual everyday watch.

The Turtle is slightly lighter and offers a more balanced result when paired with a NATO strap compared to the Sumo which feels top-heavy when used with a NATO strap. If you are going for overall quality of the caliber though, the Seiko Sumo definitely has the edge on this category. The Sumo series also exudes a more professional charm with how it presents itself.

As you will see from our side-by-side comparison below. Both the Seiko Turtle and Seiko Sumo are nearly identical in all aspects with the most notable difference is that the Seiko Sumo utilizes higher-quality materials and build.