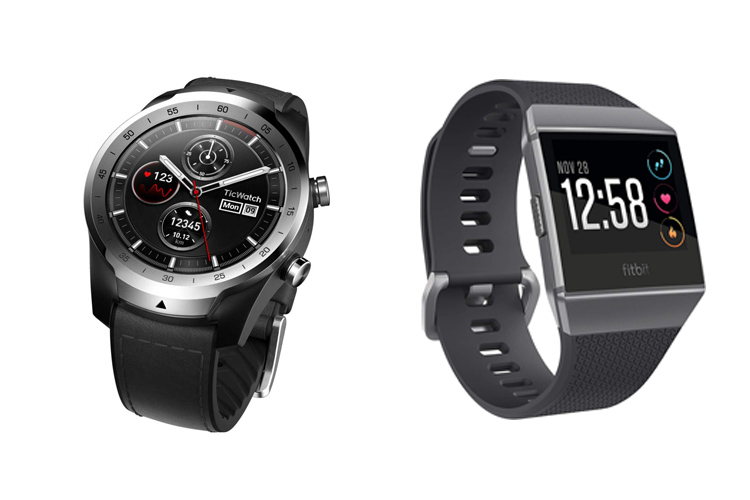 The Fitbit Ionic, despite its age, is still one of the best smartwatches to buy. It offers a complete experience that still fares better compared to budget smartwatches today. This is largely thanks to Fitbit’s expertise in the health and fitness tracking industry.

However, with each year comes a new competitor in the smartwatch market. One of these competitors is the TicWatch Pro, a smartwatch with an innovative approach in the smartwatch formula. And it also has the aesthetics to match the tech inside it However, is its unique approach enough to sway customers from the tried and tested design of the Fitbit Ionic? Keep on scrolling to find out.

Founded in 2012, Mobvoi’s core focus has been on voice AI interaction and hardware-software integration, providing B2B and B2C AI products and services to more than 40 countries and regions.

Mobvoi aims to define the next generation of human-machine interaction, creating a more natural and intuitive way for people to interact with machines.

Overall, Fitbit is a serious competitor in the smartwatch market. Keep on scrolling to find out how well one of their earlier models, the Ionic, fares against competitors such as Amazfit’s offerings.

The TicWatch Pro has a classy look with premium design elements similar to high-end wristwatches. It has a nice strap made with a mixture of leather and silicone. The watch’s body is large and has some significant heft in it, but it does not feel too heavy on the wrist.  It is still comfortable to wear throughout the day.

As for the watch’s body, it is made of polyamide and glass fiber with stainless steel bezel that adds to its classy look. There are two physical buttons on this device that make changing settings and navigation a breeze. Both of these buttons have a tactile feel which helps avoid accidental presses.

In terms of the color options available for the watch, it only comes in black and silver. As for the strap, you have different options. You can buy a silicone strap (orange or black) a brown leather strap or straps that combine leather and silicone.

The Fitbit Ionic, on the other hand, has a more boxy design that may look outdated by today’s standards. Fitbit was going for a more futuristic look with the Ionic, but the end result is not as impressive looking as the TicWatch Pro.

This futuristic look has a rectangular shape with sharp edges. The Fitbit Ionic’s strap is made of a flexible and durable elastomer material.

One design element that Fitbit has done with the ionic is plastic and metal in its casing. This allows more accuracy in its sensors and antennas while maintaining its solid build quality.

But despite their differences in their weight and size, both watches should still be comfortable to wear and should not cause any discomfort throughout the day. The straps on both models are replaceable in case you want a different aesthetics or different materials.

Both of these watches implement their displays differently. TicWatch Pro has a dual-screen technology that combines an OLED and an LCD.  It has a 1.39” AMOLED and FSTN LCD Dual display.  The goal of this dual-screen design is to save battery, which we will tackle later in its dedicated section.

The OLED screen is used to show the standard Wear OS interface.  But when you aren’t using the watch, the OLED screen turns off. The LCD display takes over and shows basic information such as the time, fitness data, etc.

The Fitbit Ionic, on the other hand, goes for a more traditional smartwatch approach. It has a 1.42-inch LCD display that has a screen resolution of 348 x 250 pixels with a pixel density of 306 PPI. It also features Corning Gorilla Glass version 3 that protects the glass.

The Fitbit Ionic and TicWatch Pro are both feature-packed smartwatches. And due to the difference between each company’s approach to smartwatches, you can expect that there will be some features that are present on one watch and absent on the other. However, the TicWatch Pro is expected to have a better set of features due to its more modern software.

Both of these watches give various alerts and notifications, such as phone calls. You can also interact with these notifications in different ways. Incoming phone calls, for example, can be muted or rejected by the user. The TicWatch Pro can answer calls since it has a built-in microphone and speaker. The Fitbit Ionic, on the other hand, does not have this feature. Additionally, the TicWatch Pro has voice command.  It can control various key functions to easily execute tasks without touching the screen or the buttons.

Both watches have stopwatch, silent alarm, vibrating alerts, and have achievements.  You are awarded achievements for reaching goals that help in keeping you motivated.

Both have Bluetooth music support, exercise tracking, notification support, and others. The Fitbit Ionic has a Fitbit Coach, while the TicWatch has Tic Exercise for Wear OS.

Both watches also have support for streaming services. The Fitbit Ionic, however, is only limited to  Deezer and Pandora.  The TicWatch Pro, on the other hand, can install most of the modern streaming services compatible with Wear OS.

One feature that is absent in the TicWatch Pro is a barcode scanner on the Ionic smartphone app. This feature allows the scanning of the barcode found on the packaging of different kinds of food. It then registers it to the database of the food you consume which allows you to monitor your calorie intake.

The TicWatch Pro and Fitbit Ionic also have a feature that can locate your phone, which can be helpful if you misplace your phone. Both watches also have inactivity alerts. Some notable features that both of these watches do not have are the built-in camera remote control function, shake to dismiss notifications, and support for external memory.

The Ticwatch Pro runs Google’s Wear OS, which not only gives you lots of access to third-party apps but also gives you a familiar user experience that can be easily integrated into your Android smartphone. Furthermore, you get an almost unlimited amount of watch faces and won’t be limited by the stock ones. However, you will have to take note that you will also be getting most of Wear OS’s problems.

The Fitbit Ionic, on the other hand, is running Fitbit’s proprietary operating system called Fitbit OS. While it isn’t as powerful as Google’s Wear OS platform, you will potentially have a more refined user experience since the operating system was built specifically for the watch.

The Ticwatch Pro isn’t specifically designed for fitness tracking compared to the Fitbit Ionic. But, it still manages to hold its own. The fitness app on the watch can support both indoor and outdoor runs as well as walking, cycling, and freestyle mode.

Both watches automatically recognize and records various activities, including walking, running, climbing, and biking.  Both watches are water-resistant, but the TicWatch Pro is not recommended for swimming.

The Fitbit Ionic also has the same basic features. However, what’s different is that the Ionic has several tools that help with the analysis of your data. These tools within the watch can further be enhanced with the Fitbit Coach.

What this app essentially does is suggest which workouts will be the most effective to reach your goals. Furthermore, you can share your statistics and compete with your friends which adds a social aspect to the smartwatch.

Both watches are compatible with Android and iOS devices via Bluetooth. However, the Fitbit Ionic can connect to Windows devices while the TicWatch cannot.

Both watches support Wi-Fi connectivity. Both also allow the installation of additional applications. And lastly, they both have NFC for wireless transactions. Unfortunately, both watches do not have an option for cellular connectivity.

The Fitbit Ionic has a better battery life, which should be expected since it has fewer features than the TicWatch Pro. It can last up to five days with mixed usage.  But when using it in GPS mode, it will only last up to ten hours.

The Ticwatch Pro, on the other hand, can only last up to two days. But when using the more limited “Essential Mode” which only utilizes the LCD display, the watch can last up to thirty days.

Overall, both of these smartwatches are excellent choices. The Fitbit Ionic still puts up a good fight despite its age. However, if you are looking for a more refined user experience with a sleeker design, then the TicWatch Pro is the better option.