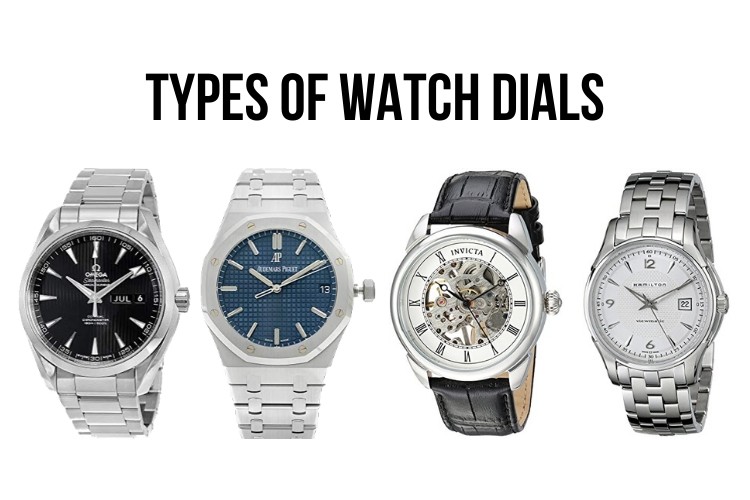 Most probably, you’ve opened this post due to curiosity. Types of watch dials? Are there many different types? Aren’t they all similar and the only difference is the color and/or complications they contain? Well, that’s primarily the reason why we crafted this post – to correct such misconceptions and tell you more about watch dials.
If you’re anticipating to read about chronographs, date, calendar, or moon phase functions, well, we will not discuss those here. Those are actually called watch complications that you will see on a dial.
Now that we’ve clarified that one first, let’s proceed in discussing the different types of watch dials.


The California dial (or Cali for short) dates back to the 1930s. The dial has Roman numerals on top (usually from 10 to 2) and Arabic numerals below (usually 4 o’clock to 8 o’clock). On some Cali dials, the 3, 6, and 9 o’clock positions are replaced with a dash instead of a numeral and an inverted triangle in place of the 12.  A modern example of this is the Basecamp Cali by Undone.


A co-signed dial is an easily recognizable type as it focuses on the inscription. While most dials indicate just the brand and maybe the collection of the timepiece, a co-signed dial indicates both the name of the brand and the retailer. Such type is usually seen among luxury brands. This also means that a luxury brand partnered with a luxury retailer, such as Tiffany & Co., will tend to cost more than those sold in common retailers.


Next is the crosshair dial. This type was popular among mid-century dress watches, such as the Omega Seamaster DeVille. A crosshair dial is characterized by a horizontal and a vertical line intersecting at the middle of the case. However, the length and thickness of the lines may vary depending on the watch model. Some extend to the edge of the dial while there are some that are shorter.


Enamel dials are very rare as they require a masterful skill to create. The material enamel is actually a type of glass that is soft and is composed of silica, red lead, and soda. It tends to liquify once heated to about 1200 degrees Celsius, then it will be able to bond with other metals. Once mixed, it can result in different colors such as gray, green, and red, depending on the metal that it has been mixed with. An example would be the Ulysse Nardin Marine Tourbillon’s blue enamel dial.
There are also sub-types of the enamel dial. These are cloisonne, grande feu, champleve, flinque, and grisaille.

Cloisonne is a form of enameling wherein the outline of the design is drawn on the dial then extremely thin gold wires were being laid along the said outline. After this, the up to five layers of enamel will be poured within the wires, with firing after every layer.

Grand Feu, which means Great Fire, is the most challenging technique of enameling but it also produces the most durable dials. Grand Feu enamel dials are quite minimalist since they are uniform in color, and are mostly white and cream.

The champleve technique uses a metal dial plate to create channels that will then serve as a sunken outline. This outline will then be filled with enamel, fired, then polished.

With the flinque enameling technique, a metal dial was already engraved, then an enamel coating is just added to create a particular texture and increase the height subtly.

The grisaille technique covers the dial first black enamel. This layer is then fired in a kiln. Then, white paint is being applied to create the desired effect – this may be an illustration of moon, stars, etc., on a night sky.


A gilt dial is derived from the gilt technique that means to cover thinly using a gold leaf or gold paint. As such, gilt dial emphasizes the features and elements of the dial using gold paint. This may be seen on the markers, hands, brand name, etc. An example of a watch with gilt dial is this 1954 Rolex Submariner.


Also called as engine-turned or guillochage dials, guilloche dials are those that have engraved repeating patterns on it. Originally, these patterns were hand-crafted with the help of different types of engraving engines such as the hand-cranked rose engine, straight-line engine, and brocading machine. However, because of the technical innovations, most guilloche dials nowadays are no longer hand-crafted; rather, they are done by a machine. The Hamilton H32515155 Jazzmaster Viewmatic is an example of a timepiece with guilloche dial. Another similar example is the Tissot Le Locle Powermatic 80.


The linen dial is a textured dial with tiny vertical and horizontal hatch marks creating a linen-like texture. Examples of this type of dial are the Rolex Datejust Ref. 1603 and the vintage Bulova Surf King 17J 11AL.

A marquetry dial is an art form. It is composed of various materials and elements such as mother of pearl and jewels that are then carefully laid on the dial by a craftsman to form an image or pattern. The video below shows how Patek Philippe creates a marquetry dial using wood.


Meteorite dials, as the name implies, are composed of polished slices of meteorite. Since there are different meteorites around the world and each piece is cut and polished individually, each meteorite dial is different from another. Oftentimes, they would be seen in triple calendar watches. Invicta has also created a number of meteorite watches (see them here).


In contrast to the decorative dials mentioned above, porcelain dials are usually white and contain some amount of clay. Despite their seemingly minimalist look, porcelain dials are actually quite difficult to make as well. The vintage Seiko Presage Arita is a classic example of this type of watch dial.


Next is the sector dial, which is also called as a scientific dial. From the term itself, sector dials are composed of contrasting concentric circles with thick lines that divide the dial into different sectors. Hour sector dials are much common; although, there are also minute sector dials. To help you visualize, this vintage Longines Art Deco wristwatch shows an hour sector dial. See more Art Deco watches here.


Skeleton dials are among those types that can still be seen up to present, which is not surprising since they are actually pretty simple to make. They just need transparent materials such as mineral glass or sapphire crystal. However, what’s intricate and special in timepieces with skeleton dials is the movement that they feature. Skeleton dials are typically used with mechanical watches to show the intricate mechanism that drives the watch. An example of this is the Invicta Specialty Watch 23533.


A tapisserie dial is somewhat similar to the previously-mentioned guilloche dial. However, a tapisserie is characterized by a pattern composed of tiny squares separated by thin channels. To create such a pattern, a pantograph is being used. This machine traces the pattern from a larger design then engraves a smaller copy on the watch dial. This process can take about 20 to 50 minutes. One iconic timepiece with the tapisserie dial is the Audemars Piguet Royal Oak.


Lastly, is the teaked dial. It is also quite simple but adds to the elegance and class to the watch face. A teaked dial comes with engraved vertical stripes. These stripes may vary in color, thickness, and finish depending on the brand. One well-known example of a teaked dial is the Omega Seamaster Aqua Terra.
Conclusion
At this point, we hope that you now have a deeper appreciation of your watch dials and be keener to the dials of the watches you’re planning to buy. You can actually choose if you prefer a decorative dial or a patterned one.  More so, the dial itself can already be an indication of the watch’s price and craftsmanship.