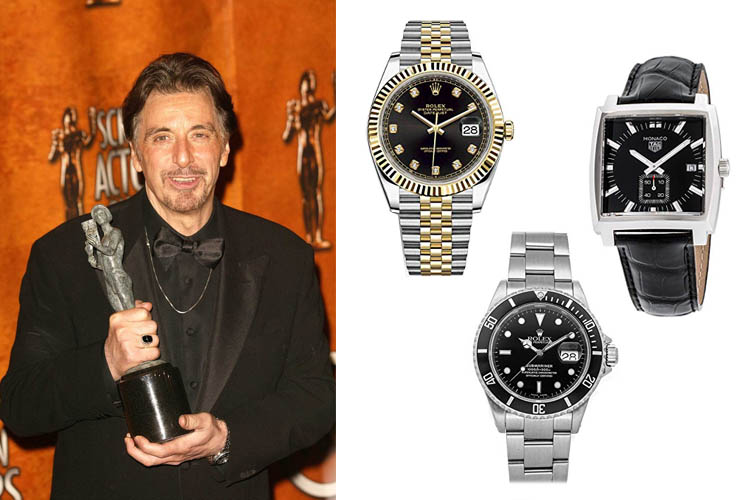 Al Pacino is one of the most revered actors of our time. Starring in classics like The Godfather, Scarface, and Heat, the American actor has played some of the most iconic movie characters of all time.
Pacino is known to be a watch collector. He has been spotted wearing different luxury watches both on and off-screen. In this article, we’ll provide a list of some of these watches, showing that the man not only has excellent taste in choosing roles, he’s also pretty good at choosing what watch brands to wear.
Most of the watches featured below are no longer in production, but we will provide links on where pre-owned models are sold.


The Submariner is one of Rolex’s most popular line of watches. This is the brand’s collection of dive watches, with high resistance to water and corrosion.
One of the watches that Pacino has been spotted wearing is a Rolex Submariner Date, believed to be a red 16610.
This model has had a number of versions (such as this one) over the years—the 16610 was first introduced in the late 80s, and quickly became popular for the durable material and aluminum bezel. The reference was officially discontinued in 2010, but the watches continued to sell as pre-owned models.
This Submariner is a 40mm model that has a design perfect as a sporty and casual look—good for both daily wear or dressier occasions. This variant came before the Cerachrom and Maxi dial, so it has a slimmer look on the wrist.
There are still a number of the 16610 models available online as pre-owned models, like this one on Crown and Caliber. The watch has a stainless steel case and aluminum bezel, with s solid case back and a sapphire crystal. On the black dial are round hour markers and a date window at 3 o’clock.


The Monaco watch by TAG Heuer was made popular by another movie icon—Steve McQueen—but it was also seen on Pacino’s movie roles.
Sharp-eyed audiences spotted the actor wearing in his 2007 movie 88 Minutes. This watch is one of the brand’s most popular models—the first square-cased, water-resistant automatic chronograph. Released in 1969 in Honors of the Monaco Grand Prix, the watch was popularized by McQueen in the movie Le Mans.
The watch was discontinued in the ’70s, but it was so popular that Tag Heuer released a number of reissues with new mechanisms. The iconic design is a crown at 9 o’clock, a metallic blue dial, and a red second hand, and two square chronograph subdials.
One of the newer limited-edition versions of this watch is the Tag Heuer Monaco x Gulf, a 39mm model with a sunray dial with pearl white counters, and the vintage-style Heuer logo at 12 o’clock. What makes this model unique is the blue and orange highlight on the right side of the dial.


This is another Rolex worn by Pacino in one of his movies. His character Richard Roma was spotted wearing a Rolex Datejust 36, which has a stainless steel case and a yellow gold dial and strap highlight.
An article by the Swiss Watch Expo says that one of Pacino’s first watches was actually a Datejust. The actor reportedly said in an interview that he had dreamt of having a Rolex Datejust for years, and when he finally got one, he could not stop showing it off.
The watch has a number of versions, but the one that Pacino wears in the movie is believed to be a model released in the 80s. with an automatic movement and a bracelet with a combination of gold and steel. This is a 36mm model with a yellow gold bezel and a water resistance of 100m.
The Rolex Datejust, or all Rolex watches for that matter, are not cheap. There are, however, many similar homage models available that will give you a similar look and function for a fraction of the price—you can check out our feature on these alternative watches in our Rolex Datejust Alternatives article.


Jaeger LeCoultre is the brand that Pacino would usually be spotted wearing on special occasions such as the red carpet or press conferences. He has been seen wearing a number of models by the Swiss watchmaker, specifically the Jaeger Lecoultre Reserve de Marche and the Jaeger-LeCoultre Master Compressor Diving Navy SEALs.
The Jaeger Lecoultre Reserve de Marche (eBay) is a 42mm watch with a stainless steel case, silver dial, and scratch-resistant sapphire crystal. This is a unique luxury watch that runs on an automatic movement and has a moon phase feature between 1 and 2 o’clock and a power reserve dial at 10 o’clock. The strap is black leather, and the water resistance is up to 50m.


Jaeger-LeCoultre Master Compressor Diving Automatic Navy SEALs (or simply Navy SEALs Automatic), on the other hand, Jaeger Le Coultre is known for luxurious, complicated watches, but they also have a number of sporty models excellent for those looking for a more casual look.
This model, which was spotted on Pacino in Venice, was designed with and for the United States Navy Seals.
This collaboration watch has a 42mm stainless steel case, a unidirectional bezel with a ceramic insert, and a rubber bracelet. Because this watch was designed for Navy Seals.
Keeping their tasks in mind, the dial has big, legible Arabic numeral and index markers, with a date window at 3 o’clock.
To have a closer look at the watch, you can check out this article on A Blog to Watch, which provides a detailed review of the watch.

Another TAG Heuer watch worn by Pacino in his movies is the Link model. He wore the timepiece on Christopher Nolan-directed psychological thriller Insomnia.
The TAG Heuer Link is famous for its S-shaped bracelet. According to the brand, this is the only collection whose design started with the bracelet. TAG calls this a “sport chic look,” that floats on the wrist.
The watch is available in 32mm and 41mm sizes. This automatic 41mm model has a classic black dial with white index markers and a sapphire crystal with an anti-reflective coating. This model has a fixed stainless steel bezel, a fine brushed/polished steel band, and a sunray dial. The movement is a Calibre 5 Automatic with a power reserve of up to 38 hours.


We’ll cap off this article with a watch worn by Pacino in one of his most popular roles. On-screen as Michael Corleone in The Godfather II, he is seen what watch enthusiasts believe is an Omega Constellation Pie Pan watch (eBay) in a 14k yellow gold.
The watch, now a vintage model, was released in the early 1950s. According to Time and Tide, this was the brand’s first mass-produced chronometer-grade watch. It enjoyed popularity until the 1970s and had different versions and designs.
The one worn in the movie looks like the Pie Pan model with thick applied golden index markers, Dauphine-style hands, and a stainless steel case. The case is called “pie pan” because it resembles a literal pan used for pies in bakeries.