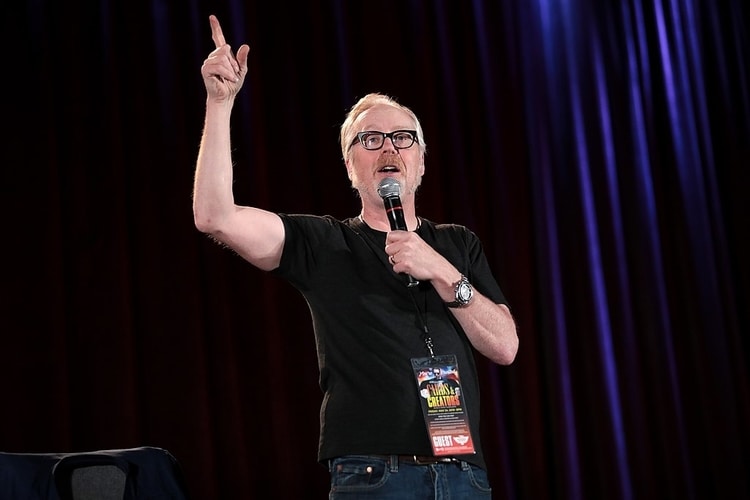 Adam Savage (Image Credit: Gage Skidmore)
Adam Savage is a well-known TV personality from MythBusters with co-host Jamie Hyneman. He also hosted Savage Builds on Science Channel.  More so, he is also a special effects designer and among his famous works were in the films Star Wars: Episode II – Attack of the Clones and The Matrix Reloaded.  He is also the founder of Savage Merchandising LLC, popularly known as Savage Industries, which produces premium quality bags, pouches, and accessories. Adam Savage also worked as a producer, animator, graphic designer, set designer, etc.
Although Adam Savage is well known for his myth-busting experiments and special effects, many may not realize that he’s also an avid watch collector. Savage’s watch collection includes everything from affordable Seiko SKX  models and the budget Timex Weekender to the iconic Omega Seamaster and Tag Heuer Grand Carrera. Let’s take a closer look at all of his watches.
As a man with masterful hands, people can’t help but notice the watches he wears. Good thing, he also takes pride in his watches and loves to talk about them. In this post, we’ll share some of Adam Savage’s favorite watches.


From his shows and videos, Adam loves to wear his Omega Seamaster Planet Ocean. It is a 45.5mm silver-toned steel watch. It has a self-winding chronograph function and is equipped with a Swiss Automatic movement that promises precision, durability, and stability.
The Omega Seamaster Planet Ocean was also designed to be easily readable even underwater; hence the luminous hands and indexes along with Arabic numerals for 3, 6, 9, and 12. The steel band even comes with a dual locking foldover clasp with a double push-button. It also has a domed, scratch-resistant, and anti-reflective sapphire crystal. This Omega Seamaster is water-resistant to 2000 feet, making it a great timepiece for water sports and even skin diving.


Another Omega timepiece that Adam Savage owns is the Omega Apollo Speedmaster. It is a 42mm stainless steel watch with a fixed moonshine gold bezel.  It is driven by Automatic movement, particularly an Omega calibre 3861.
Its black dial with rhodium-plated hands and hour marker. The sapphire crystal is also scratch-resistant, and its bracelet has a foldover clasp with a push-button release clasp. This particular Omega is water-resistant to only 100 meters.
Being the watch model worn on the moon in 1969, it has become an iconic watch and a status symbol. Aside from Adam, other celebrities who have worn the Omega Apollo Speedmaster are Daniel Craig, Tom Hanks, Steve Carell, Ryan Reynolds, and Simon Pegg.


Adam Savage was also seen wearing a Seiko SKX009.
It was called “Pepsi Diver” primarily because of the red and blue colors on its bezel.
Seiko SKX009 is a particularly impressive and highly sought-after timepiece among divers and watch enthusiasts because of its rugged design, durability (ISO 6425, divers watch certified), automatic movement, and affordability.  This timepiece is built with a hardlex crystal, stainless steel case and bracelet, and luminous hands and hour markers. It also has a day and a date function at 3 o’clock.
In 2019, Seiko announced that it will halt production of the SKX and the collection will be replaced by the new line of Seiko 5 automatic watches. This announcement left die-hard Seiko fans scrambling to buy up the existing stock of these watches. if you like the look of the watch, you can see our list of SKX alternative watches here.

Adam also takes pride in his modified Seiko Dive Watch, which is very much similar to his Omega Seamaster, only much cheaper.
Some aficionados love to modify Seiko watches and it comes as no surprise that the guy behind the elaborate setup of intrigue myth-busting tests would appreciate the idea of tinkering with watches. In the video below he explains that he didn’t actually mod his own watches (he bought it on eBay) but it is cool that he appreciates the watch modding community. It would be cool to see Adam tinker with his own Seiko… maybe someday.
Among the aspects modified in this timepiece are the bezel, number markers, and lume.

Also it was asked recently that I show my Seiko modded to look like an Omega planet ocean. Here you go! pic.twitter.com/oEuZgTU0Ia

In the video below, Adam Savage is seen with a Tag Heuer Grand Carrera. It’s another luxury timepiece driven by a Swiss Automatic Calibre 6RS movement with a power reserve of 38 to 44 hours.
This elegant-looking timepiece comes with a stainless steel case and bracelet, silver-toned hour markers, hands, and dial. The highly polished hour markers and hands have a luminous coating to improve their readability.
The dial surface also has polished and brushed portions, creating a special effect that further enhances the dial’s aesthetics. You would also notice a narrow outer rime for the minute indices. It also has a date window at 3 o’clock, and a Rotating System Disc at 6 o’clock.  Its water resistance is up to 100 meters. To ensure such, Tag Heuer Grand Carrera is built with an oversized screw-in crown with two security gaskets.

That watch is new fave, @NeilHarris18. The inexpensive and gorgeous Timex Weekender. Bought one for both me & Mrs. Donttrythis. #notpaidplug

The Timex Weekender is another proof that Adam Savage is not only into luxury timepieces but that he also likes simpler and affordable ones.
Timex Weekender is a casual everyday watch known for its NATO strap (although there are also models with leather strap). The collection provides a wide variety of colors for dial and strap. The design and build are pretty simple – silver-toned brass case, Arabic numerals, mineral glass crystal, and the Indiglo light up. Some models also have a date and a chronograph function.
https://www.instagram.com/p/CCmgd2cH7JG/

Playing cards from @numberphile! I love these AND their videos. pic.twitter.com/4N9vrVaZzd

One of the stars of #Mythbusters Adam Savage sporting his Seiko SKX009 Pepsi Diver – a no-nonsense dive watch that fits the man to the tee #Seiko #SeikoSunday #seikoskx009 #pepsiwatch #Mythbuster #adamsavage @seikowatches pic.twitter.com/I6TRBYRxV3

If you really want to see Adam Savage geek out about watches, you’ll want to check out this video with Michael Stevens from the Youtube channel “Vsauce”

A few interesting comments in the video – for one it’s cool to see how they both get excited about the complication and mechanics of the watch. It makes sense since they are both mechanically inclined and especially Adam from the detailed testing he does on all of his shows – that he’d appreciate something like a 1/4 Chrono subdial. Seiko Pepsi diver and the Omega Seamaster Planet ocean mentioned above. They also go into the whole idea of modding watches. They also go into things like wrist size and how tight or loose a watch should fit and they also discuss traveling with watches, 24 hr watches, and even a watch the runs counter-clockwise.