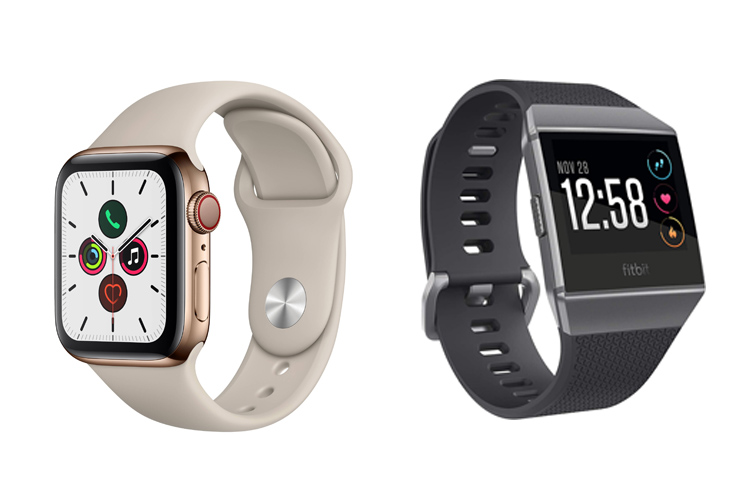 The Fitbit Ionic, despite its age, is still one of the best smartwatches to buy. It offers a complete experience that still fares better compared to budget smartwatches today. This is largely thanks to Fitbit’s expertise in the health and fitness tracking industry.

The Apple Watch, on the other hand, is easily one of the most popular smartwatches in today’s market. Despite being exclusively made for consumers within the Apple ecosystem, it has become one of Apple’s most successful products in its current lineup.

If you are shopping for a new smartwatch, you might be thinking. Is the Fitbit Ionic enough to bring a satisfying experience? Or is it worth adding more to obtain the Apple Watch Series 5’s more refined user experience and more premium build quality? Keep on scrolling to find out.

And if there is one word to describe this company, it would be innovation. The iPhone single-handedly changed the name of the game. That one single product transformed smartphones from pocket telephones to multimedia devices. It even arguably changed the way we live our lives.

That kind of revolution can be seen in nearly all of their products. And that also applies to the Apple Watch. This relatively simple product has transformed wristwatches into extensions of our smartphones and can do things beyond what was imaginable at the time.

It has since then been copied nearly countless times by its competitors. However, many still regard it to be the industry standard in smartwatches. Keep on scrolling to find out how well it fares against the Fitbit Ionic.

Overall, Fitbit is a serious competitor in the smartwatch market. Keep on scrolling to find out how well one of their earlier models, the Iconic, fares against the newer Apple Watch Series 5.

Both smartwatches feature a square display that deviates from the usual wristwatch look. However, Apple arguably executes this square design better with its cleaner design. The Fitbit Ionic feels like an older smartwatch design that may not sit well with modern smartwatches.

As with most of Apple’s smartwatches, the Series 5 comes in two versions. These are the 44 mm and the 40 mm version. This is always great since you will be able to choose which version fits you best. The only difference between the two is the smaller display and smaller battery on the 40 mm version.

The Fitbit Ionic, on the other hand, is Fitbit’s entry to the fitness smartwatch market. It also serves as the follow up to the Fitbit Blaze. Its fitness focus is evident with its real-time guidance feature, which is effective for setting workout goals.

In terms of aesthetics, the Ionic is going for a futuristic look inspired by space exploration vehicles. It may look out of place and may not fit everyone’s tastes, considering the minimalist options available in the market.

This futuristic look has a rectangular shape with sharp edges. The Fitbit Ionic’s strap is made of a flexible and durable elastomer material.

One design element that Fitbit has done with the ionic is plastic and metal in its casing. This allows more accuracy in its sensors and antennas while maintaining its solid build quality.

The Fitbit Ionic design, the only real issue with the Ionic is the aesthetic. The large rectangular face and stiff rubber wristband.  But this design makes the watch more angular and feels more durable.

Both watches have customizable watch faces and interchangeable bands.

As for their displays, the Series 5 has a display size of 1.78 inches. This watch has a screen resolution of 448 x 368 pixels with a pixel density of 326 PPI. The screen is protected by sapphire crystal.

The Apple Watch Series 5 has one of the best display qualities in the market. The screen is vibrant and has good viewing angles. It will allow you to see the display, no matter the lighting condition.

Additionally, the Series 5 is utilizing LTPO technology for its Always On Display (AOD). We will talk more about this in the “Features” section.

The Fitbit Ionic, on the other hand, has a 1.42” display with a screen resolution of 348 x 250 pixels and a pixel density of 306 PPI. The display is protected with Corning Gorilla Glass V3.

The Ionic’s LCD display still holds up despite being several years old. However, it is no match to the Apple Watch’s modern OLED display, which is more vibrant and clear than the Ionic’s display.

Additionally, the Apple Watch has an additional feature called Force Touch, similar to the one implemented on iPhones. Essentially, it gives additional inputs to the watch without resorting to adding more buttons. The Fitbit Ionic does not have a similar feature.

Both watches have an always-on display feature. However, the implementation of the Apple Watch is noticeably better.

Overall, both displays are great. However, the Apple Watch Series 5 is easily superior to the Fitbit Ionic.

Overall, both smartwatches are well built. But of course, the Apple Watch Series 5 has the edge since it is newer and comes in different materials. And also, the Apple Watch has gone through different revisions, which allowed them to iron out any issues that the previous generation had.

Both smartwatches are feature-packed and cover most of the basic features that most smartwatches have. Here are some highlights for each watch.

Both watches have smart notifications. Both can receive emails, text, calls, weather forecasts, calendar reminders, and more. However, the Apple Watch Series 5’s implementations are noticeably better due to its more refined software.

Additionally, Apple Watch Series 5 has voice commands through SIRI and has a built-in camera remote control function. The Apple Watch also allows you to make FaceTime audio calls to your contacts when connected to cellular data or WiFi via the Phone app. It does not, however,  support FaceTime video calls.

The Fitbit Ionic cannot do any of these as it lacks a microphone and speaker.

Both watches can store and play MP3 and MP4 files. They can also stream music through Wi-Fi and Bluetooth.

In terms of music streaming, you have Apple Music and a dedicated podcast app installed by default on the Apple Watch Series 5. You can also install third-party streaming apps such as Spotify.

The Fitbit Ionic, on the other hand, is more limited. You can only stream music through Deezer and Pandora. And also, you cannot install third-party apps such as Spotify and Apple Music.

The Fitbit Ionic also has most of the sensors found on the Apple Watch Series 5. However, it does not have a Barometer and a Cadence sensor.  Both watches have a blood oxygenation sensor to estimate your blood oxygen saturation (SpO2) while you sleep. Both watches do not have a temperature sensor, 3D compass, and do not monitor perspiration.

Both watches have a “Find My Phone” feature that can come in handy if you misplace your smartphone. They also have a silent alarm, stopwatch, vibrating alerts, inactivity alerts, and fitness achievements.

Additionally, both smartwatches have features designed for women. These include exercises tailored specifically for women. There is also a menstrual cycle monitoring feature that allows the watches to give notifications and alerts to the user when the specified/predicted date is near.

There is one notable feature that is currently only available in Apple Watches. This is the fall detection feature. This allows the watch to make emergency calls when it detects the user is falling from a certain height. This is a crucial feature to have, especially when you are traveling or hiking alone.

The Apple  Watch  Series 5 can track distance-related activities, steps, and sleep in terms of its fitness tracking capabilities. It can also measure the pace and calories burned. Additionally, it automatically detects activities and will constantly provide activity reports.

Both watches can connect to smartphones via Bluetooth. However, one thing that you have to take note of is that the Apple Watch Series 5 is only compatible with iOS devices. There are no workarounds for the Apple Watch to work on Android devices.

The Battery life of the Apple Watch 5 lasts up to 18 hours. It can last throughout a regular day. However, you will surely need to recharge the watch every night.

The Fitbit Ionic’s battery life, on the other hand, lasts up to five days with mixed usage. And with a GPS mode, it lasts up to 10 hours.

If you are on a tight budget but still want a great performing fitness-focused smartwatch, then the Fitbit Ionic is still a great choice. However, if you want the best smartwatch experience, then the Apple Watch Series 5 is still the king of modern smartwatches.