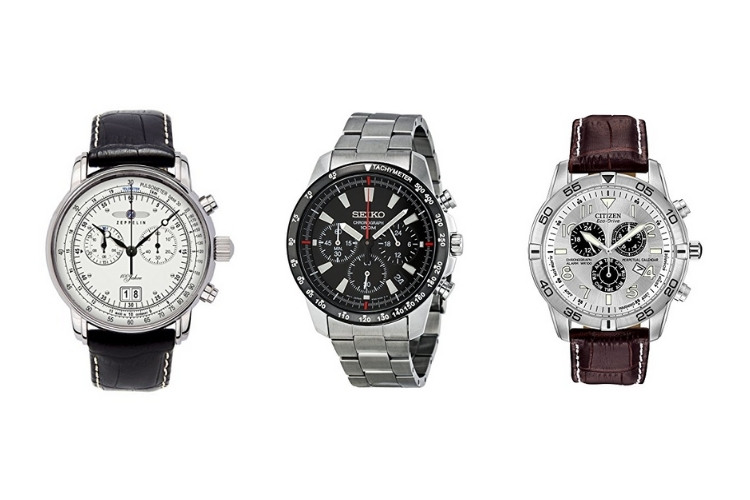 When we mention chronograph watches, things like racing, planes, aeronautics, and sports competitions often come to mind. The chronograph function is especially useful for racers and pilots or other wearers that want to use their watch to track elapsed time.
But there is even more to a chronograph, it can be used for tracking all sorts of things in our daily lives like cooking time, the time it takes to reach the subway, or if you have a car, you can use it for the parking meter; workouts; etc.
Apart from being very practical and functional, chronographs can also be as stylish and fashionable. Just like the ever-popular dive watch, many people love the look of the subdials and complexity of a chronograph watch even if they don’t plan to use the watch for its intended function.
So, let’s move on to the list of the best chronograph watches.
(Please note that all these watches were selling for $500 or less at the time of publishing. Prices may have fluctuated since then, possibly pushing them over the original budget. We’ve also tried to include watches at the lower range for decent chronograph watches to provide good value options for everyone’s budget). 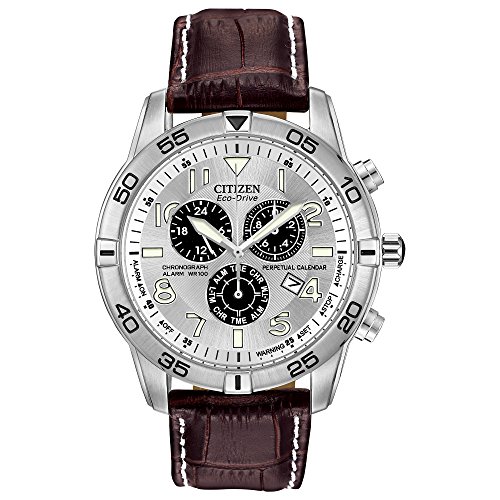 Elegant details and multifunctionality make the Citizen Men’s Eco-Drive Chronograph Stainless Steel And Leather Watch an exceptional timepiece.
Presented in this chronograph watch’s beautiful patterned silver-tone sunray dial is 1/10th of a second, 24-hour, and multi-function subdials. This watch also comes with a date display at its four o’clock position, perpetual calendar, leap year, and alarm.
Moreover, with this watch, you can go for water activities like swimming and snorkeling but not scuba diving, as it’s water-resistant to 100 meters, and it’s made watertight with its screw-down crown and a screw-down case back.
Making up this stunning timepiece is a stainless steel case, scratch-resistant mineral crystal dial window, and brown Croco-embossed leather strap. It’s a solar-powered Japanese quartz watch powered by Citizen’s Eco-Drive technology with an EOL indicator.

The Bulova Men’s Special Edition Lunar Pilot Chronograph is a reliable timepiece with unparalleled precision. And it comes with a sturdy, sleek design to add to that.
Replicating the original Bulova Lunar Pilot Watch worn by commander David Scott on the Apollo 15 mission with an upgrade of Bulova’s exclusive high performance 262 kHz-quartz movement.
With this stunning timepiece, you can have the convenience of a chronograph, tachymeter, and a date display between the four and five o’clock positions.
With its chronograph function, you get 60-minute and 1/10th of a second chronograph timer subdials at the upper part of its dial along with its silver-tone central hand. The subdial at the lower part provides the seconds function.
It has a beautiful black dial with a combination of matte and sunray style in its design that’s enhanced with circular patterns on its subdials as well as on its minute markers. The high contrast in its dial makes for easy readability and adds to its aesthetic. Matching its dial is an equally beautiful black checkered-patterned strap.

Typical of Casio’s analog-digital watches, the Casio Men’s Edifice Tough Solar Chronograph is an analog-digital watch packed with handy features. Of course, this cool, sleek timepiece designed with silver-tone stainless steel and a black dial with silver-tone details provides the chronograph function you’re looking for. But it also comes with other great features, which make it suitable for those who opt for more functionality.
Apart from timekeeping, this watch is capable of functions, such as a 1/100-second stopwatch; countdown timer; five daily alarms; full auto-calendar till 2099; world time including 40 times zones (40 cities + UTC); daylight saving on/off; and home city and world time swapping. To add to that, it’s water-resistant to 100 meters, which allows you to enjoy water activities, such as swimming and snorkeling.
For readability, it’s equipped with a hand shift feature, wherein hands move away from the digital display for an unobstructed view of its contents as well as a Super Illuminator LED light.
This is a Japanese quartz watch that can be linked to your phone with its Mobile link feature, a wireless linking via Bluetooth SMART. You can make time adjustments, easily adjust watch settings, and enable a phone finding signal through this feature.
Additional features in this watch worth noting are its airplane mode and power-saving mode.
It’s powered with Casio’s Tough Solar technology. Its power reserve can last for 8 months in normal use and up to 26 months when stored in total darkness with the power save on. You can be notified when its power is running low with its low battery alert.

The Seiko “Flightmaster” Flight Alarm Chronograph Stainless Steel Watch is designed with pilots in mind, but it can make anyone look fly and provide the chronograph you need. And since it’s a pilot watch, it’s also handy for making pre-flight and in-flight calculations like measuring ground speed; distance; fuel burn; wind set; and etc. with its E6B navigational slide rule. Not all would be able to utilize this feature, but it sure does give an interesting look to it that adds a distinctive style to the watch.
This nifty timepiece runs with a Japanese quartz movement. Its chronograph function includes a yellow central hand and a 60-minute chronograph timer subdial at its 12 o’clock position. The seconds function of this watch is at the subdial at its nine o’clock position.
Also included in this watch is a 12-hour basis alarm located at its six o’clock position, tachymeter scale, and date display at its three o’clock position.
It looks rather sleek with its design of silver-tone and black with fine details in yellow, silver, and white.
As it’s built with stainless steel, black PVD bidirectional rotating bezel, and scratch-resistant Hardlex crystal, it has a pretty rugged construction. Plus, it’s watertight with its screw-down crown and screw-down case back, especially as it’s water-resistant to 200 meters.

Coming from the Graf Zeppelin series, a series brought forth in celebration of the 100 years of the Zeppelin airship, the Graf Zeppelin Chronograph is a timepiece of equal excellence to Zeppelin. This company made its name in the rigid airship industry and made historic flights in Germany in the 1900s. It’s a six-jewel Swiss quartz watch skillfully crafted with elegance, multi-functionality, and durability.
Additional features to this fine timepiece are a chronograph, 12-hour totalizer alarm at the six o’clock position, date display at the four o’clock position, tachymeter scale, and telemeter scale.
Going into the details of its chronograph function, it features a 30-minute chronograph timer subdial at its nine o’clock position along with its black central hand. Providing the seconds function is the 60-second subdial at the three o’clock position.
It has a timeless appeal with its restrained aesthetic in an antique style. It boasts a silver-white dial together with a stainless steel case and brown Croco-embossed leather, making the watch pretty solid. Adding to its durability are its scratch-resistant mineral crystal dial window and 50-meter water resistance.


The Alpina Startimer Pilot Chronograph is a chic timepiece with a distinctive style. This non-tradition black and grey camo dial design made it on our list of best camouflage watches.
As strong as its wrist presence are the tough materials such as the black PVD-coated stainless steel for its case; scratch-resistant sapphire crystal for its dial window; and leather for its strap, making it very durable.
This is a 13-jewel Swiss quartz watch equipped with both a chronograph and a date display at its six o’clock position.
Together with its red and silver-tone central hand are 30-minute and 1/10th of a second chronograph timer subdials on the upper half of the dial for its chronograph function. And at the lower part of the dial is the seconds subdial.
It has a screw-down crown and screw-down case back to go with its 100-meter water resistance for water tightness.

Check Price on Amazon I See on Hamilton

Rooted in traditional; military aviation, the Hamilton Pilot Pioneer Chrono is a reliable and durable timepiece that makes a chic watch for casual wear.
It comes in a cool all-black design that’ll look good with anything. Furthermore, the contrast of the white and silver-tone details on its black dial makes for easy readability.
This chronograph runs on a Swiss quartz movement and date display at three o’clock position.
As a watch that also functions as a chronograph, it features a 30-minute chronograph timer subdial at the upper left part of the dial to go with its silver-tone central hand. At the lower part of the dial is the seconds subdial.
It has a rugged construction made with stainless steel case, scratch-resistant sapphire crystal dial window, and a nato nylon strap. In addition, it has decent 100-meter water resistance.

The Tissot PRS 516 Chronograph Watch is a stylish timepiece with a vintage elegance with its 1960s motorsport-inspired design.
It’s a sleek-looking stainless steel and leather watch designed with black and touches of red. Giving it the motorsport feel is its perforated leather strap and its chronograph function and tachymeter bezel that’s made pretty tough with ceramic.
Included in its chronograph function are the red central hand and subdials for the 30-minute and 1/10th of a second chronograph timer subdials at the upper part of its dial. Serving as the seconds function is the subdial at the lower part of its dial.
Another added complication to this watch is the date display at its four o’clock position. And it runs with a Swiss quartz movement.
Its sapphire crystal keeps it protected from scratches. It comes with a 100-meter water resistance that’s backed by a screw-down crown and screw-down case back, making it watertight. 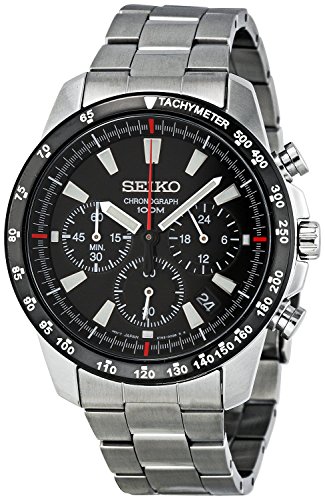 Keep In Mind When Buying Chronographs

Basically, the chronograph is a timepiece that functions as a stopwatch and displays elapsed time in subdials. The word chronograph comes from the words “Chronos,” which means time, and “Graph,” which means writing.
The earliest versions of the chronograph actually came with a small pen attached to it that the wearer used to indicate the elapsed time with a pen mark on its dial.
If you’re interested in more on the topic, we have a more in-depth explanation of the chronograph for some enlightenment on this kind of watch, we will provide a little brief on chronograph watches.
Style is one thing when choosing your watch. It’s a given that people will go for something that suits their taste. Chronograph watches do have a lovely aesthetic that comes along with their functionality. Although some wearers don’t even utilize the chronograph function, the stylish looks of these watches are popular with consumers.