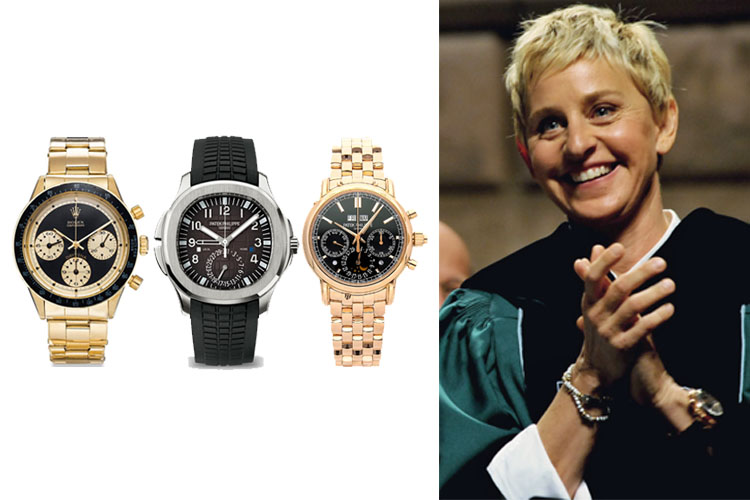 Image Credit: Tulane Public Relations via Creative Commons
Ellen DeGeneres is an American comedian, actress, and talk show host. Currently, she’s hosting the talk show The Ellen DeGeneres Show, which started in 2013. Prior to that, she also played the main role in the sitcom titled Ellen that aired from 1994 to 1998.  Ellen is also a writer and producer.
Before gaining popularity as an actress and TV host, Ellen started her career as a stand-up comedian back in the 1980s. She even made an appearance on The Tonight Show Starring Johnny Carson in 1986. As a film actress, among her important roles were in Mr. Wrong in 1996 and The Love Letter in 1999.
Ellen also provided the voice of Dory in the animated films Finding Nemo and Finding Dory for which she received the Saturn Award for Best Supporting Actress. Speaking of awards, Ellen has won the Golden Globes Carol Burnett Lifetime Achievement Award, 30 Emmys, 20 People’s Choice Awards, and other various awards commending her work and humanitarian acts. She also received the Presidential Medal of Freedom back in 2016.
Among watch enthusiasts and collectors, Ellen is known as a mega collector. From her shows, interviews, and other appearances, she clearly owns and wears a lot of wristwatches.
Although, from her expansive collection, Ellen clearly prefers two particular brands – Rolex and Patek Philippe. In this post, we’ll show you a few outstanding pieces from her watch collection.


During her interview with Justin Timberlake, Ellen was seen wearing the Patek Philippe Aquanaut Travel Time 5164A. The model was first launched in 1997 and immediately caught the attention of watch enthusiasts because of its sleek modern design. It has a rounded octagon case and a “tropical” strap made of black polymer material.
The Patek Philippe Aquanaut Travel Time 5164A features a dual time zone function showing a local and a home time with day and night indications. This timepiece is driven by a mechanical self-winding caliber 324 S C FUS movement.


On several occasions, Ellen was seen wearing her Patek Philippe Grand Complication 5204/1R-001.
It is indeed a complicated timepiece because of its chronograph, perpetual calendar, and moon phase functions. It also has a mechanical movement and a water-resistance rating of 3 ATM. It has a black dial and an analog display.


According to horologers and avid fans, the Patek Philippe Perpetual Calendar Chronograph 5271P was the first complicated timepiece that was seen on Ellen’s wrist during the show. But of course, that wasn’t the last time that the timepiece was seen on the show.
Almost similar to the previously-listed timepiece, the Patek Philippe 5271P also features a perpetual calendar and a chronograph. They are on a black dial and encased in platinum. For an added sparkle, the bezel, lugs, and clasp are set with diamonds.


Ellen is not always the one doing the interviews on celebrities and personalities. In 2018, she was the one interviewed by Jerry Seinfield in a Netflix series titled Comedians in Cars Getting Coffee. During such an interview, Ellen was seen casually wearing her 1969 Rolex Daytona 6241 “Paul Newman“.
This particular Rolex Daytona configuration was produced in 1969. However, initially, it did not cause much of a stir in the watch industry because of its “exotic” dial. Yet, the tide turned in the 1980s when the racing driver Paul Newman was seen wearing one. Since then, it has become one of the sought-after vintage Rolex on the market.
The Paul Newman dial is considered an “exotic” one with its white dial, black subdials, black acrylic bezel, and silver push-down chronograph buttons. Rolex Daytona 6241 is a stainless steel watch and there are only about 2,700 pieces produced.


Perhaps Ellen loved the Paul Newman dial that in October 2019, she purchased another rare Rolex Daytona variant, the “John Player Special” or the Rolex Cosmograph Daytona 6264. Produced between the late 1960s and early 1970s, this vintage timepiece is truly rare to find considering that there are only ten known pieces of such configuration.
The Rolex Cosmograph Daytona 6264 is nicknamed “John Player Special” because of its color scheme which is the same as the color of the cars of the 1970s racing team. It is a yellow gold timepiece with a highly contrasting black dial. It also has yellow-gold subdials, a black tachymeter bezel, and yellow-gold pump pushers.
By the way, Ellen also has the Rolex Cosmograph Daytona 6262, which is also a vintage Paul Newman. To count, we now know that she owns three Paul Newman vintage watches but we’re not sure if that’s all from her mega-collection or if there’s more that we just haven’t noticed yet.


Another crowd favorite that Ellen has is the Rolex Yacht-Master 40 ref.116655. Specifically, hers is an Everose variant that features a rose gold case, matte black sandblasted bezel, and the Rolex Oysterflex bracelet. Moreso, it has the iconic Rolex black dial with large luminous hour markers and a magnified date window at 3 o’clock. The overall look of this timepiece particularly appeals to those who want a contemporary-looking watch.
There are a lot more Rolexes that Ellen owns such as the Rolex Explorer II ref. 1655, a Day-Date II 228238, and a GMT-Master 116718. However, in addition to Rolex and Patek Philippe, her watch collection also includes the Audemars Piguet Royal Oak Dual Time, Omega Seamaster 300 “Spectre” Edition, and Omega Speedmaster Professional. Well, those are just a few impressive watches and we’re sure that she’ll keep expanding her mega-collection of watches.