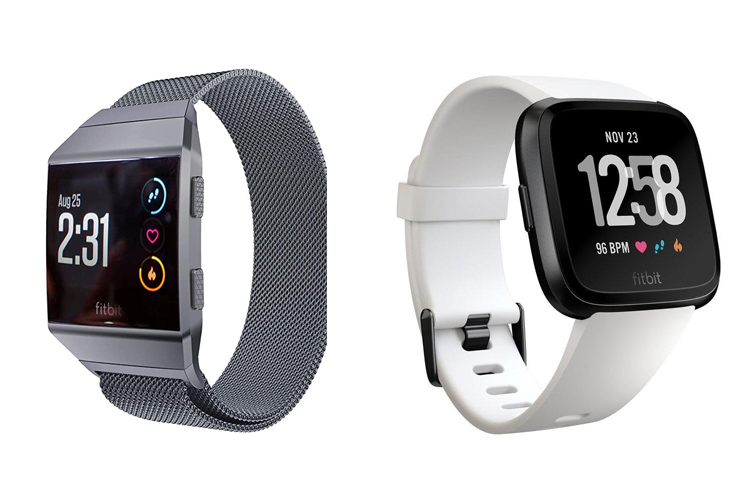 The Fitbit Versa 2 and Fitbit Ionic are two solid fitness watches that get many things right compared to the rest of the smartwatch competition. The Fitbit Ionic is the older smartwatch that was first released in 2017. Surprisingly, it still holds up to today’s offerings and has plenty of value to offer.

However, the newer Versa 2 also seems like a compelling choice. It features similar design elements with the Ionic but notably has a more updated look and set of features that are more competitive with today’s offerings.

If you are shopping for a new smartwatch, can the older Ionic still hold up with today’s modern user demands? Or should you instead, head straight on to the newer and more updated Fitbit Versa 2? Keep on scrolling to find out.

The Fitbit Versa 2, at first glance, looks strikingly similar to its predecessor. However, closer inspection reveals a few small tweaks which give the Versa 2 a more stylish look. It has a squircle shape (a hybrid shape of a square and circle) and features a single button on the left that serves as both the select and back button.

The watch has some pretty nice aesthetics and pairs well with premium bands. The wristbands are all interchangeable and have a strap size available in small size and large size.

The Fitbit Ionic, on the other hand, was going for a futuristic look inspired by space exploration vehicles; it has a square display with sharp edges. It may look out of place and may not fit everyone’s tastes, considering the minimalist options available in the market.

One design element that Fitbit has done with the ionic is the use of plastic and metal in its casing. This design allows more accuracy in its sensors and antennas while maintaining its solid build quality. The Ionic’s strap is made of a flexible and durable elastomer material.

Both watches should be comfortable to wear and should not cause any discomfort throughout the day, given their weight and size. The straps on both models are replaceable in case you want a different style or different material.

Both watches offer a solid display that remains visible regardless of the lighting condition. However, the Versa 2 offers a newer AMOLED screen with deeper blacks and generally better picture quality than the Ionic’s LCD screen.

Both screens are protected with Corning Gorilla Glass. Both watches have a reliable touchscreen and physical buttons for easier navigation.

The Ionic and Versa 2 are well-built smartwatches that combine metal and plastic in its build. There have been no major complaints with these two watches, and Fitbit has a good reputation, so you can confidently use these in your daily activities. Both smartwatches are dust-proof and water-resistant up to 5ATM. They are also sweat-resistant and can reliably be used for sports and other outdoor activities.

Both smartwatches offer similar features. They can both display alerts and notifications such as calls, text messages, app alerts, etc. They also have a stopwatch, alarm, and other general watch features. Additionally, they can also access Fitbit’s online portal (Fitbit’s platform that helps you monitor your statistics uploaded from your watch)

Additionally, both watches have Bluetooth music support, exercise tracking, and Fitbit Coach. The Fitbit Ionic and Versa 2 can also help locate your smartphone, which is always useful in case you misplace it.

In terms of the health tracking features, both watches feature achievements. This is similar to video games where you are given achievement badges for reaching your health goals. Additionally, this feature has a social aspect where it allows you to share achievements and compete with your friends’ high scores. This is a great feature to have since competing watches don’t usually tackle health and fitness using this kind of approach.

Both watches can store and play music files. They can also connect to Bluetooth Headphones/Earbuds that support Bluetooth 4.0. The onboard storage can also be used for storing offline music through Deezer and Pandora.

It is worth noting that the Versa 2 is compatible with Spotify while the Ionic is not. However, the Versa 2 only serves as a remote for the Spotify App on your smartphone. You cannot download music for offline listening like in the Pandora and Deezer App.

One notable feature that is missing on the Versa 2 but is present on the Ionic is the built-in GPS. You can connect your smartphone to the Versa 2 to compensate for it, but this is an additional step which may bother those who need built-in GPS support.

Of course, there are also some features that are only available on the Versa 2. One notable example is the Amazon Alexa Voice Assistant. Similar to other high-end watches like the Apple Watch Series 5, you can control key functions of the watch faster by simply using your voice. You will have to take note that you will need to download the Alexa App and set up an Amazon account to use this feature.

Take note that Alexa’s responses to queries are only shown in the form of text instead of the usual Alexa voice. This is understandable since the Versa 2 has no speaker, but this can be inconvenient in some situations where you can’t glance at your watch.

Additionally, the Versa 2 features a smart alarm that optimizes your sleep schedule. This feature works in conjunction with the sleep tracking feature to achieve the best results.

Both devices are running Fitbit’s proprietary Fitbit OS. Like most of the mainstream OS, both watches have essential features such as customization via watch faces and downloading apps via the Fitbit Store. However, the experience will be a lot better with the Versa 2 thanks to its more modern and faster processor. Several apps, such as Fitbit Pay, also work better.

The Ionic is no slouch, but it will start showing its age when sitting side by side with the Fitbit Versa 2. The Versa 2 rarely encounters any lag and has an overall smoother performance. It is also compatible with more applications and will likely receive more future software updates and software support from Fitbit.

Both devices feature an accelerometer to track steps and movement as well as a heart rate monitor on the rear to keep tabs on your heart. There is also the relative SpO2 sensor to track blood oxygen.

The activities are automatically detected in both smartwatches, along with other data such as elevation. Some of the available activities in the watch’s multi-sport mode include cycling, running, and swimming.

The only significant difference between the two is Ionic’s built-in GPS, which is absent on the Fitbit Versa 2. However, you can use a connected GPS from your smartphone for outdoor workouts if you want to track route and distance.

Fitbit is also introducing female health tracking features to its app. This functionality will be available to all Fitbit users through the app. Fitbit has made improvements to how data captured is presented, and both devices will now be able to display trends regarding your resting heart rate and step count directly from the watch interface.

Other sensors available in these devices include an accelerometer, compass, altimeter, SPO2, elevation, and ambient light sensor.

Both watches are compatible with Android and iOS that support Bluetooth 4.0. The Fitbit Ionic can connect Windows devices, but this has been dropped with the Versa 2.

Both watches support Wi-Fi connectivity. It allows the installation of more applications such as music streaming services. Additionally, The Fitbit Ionic and Versa 2 have NFC, which can be used for Fitbit Pay.

Both smartwatch wirelessly and automatically syncs to your devices—however, these lack cellular modules and ANT+.

Battery life is where the Ionic and Versa 2 shine compared to other smartwatches. Charging the watch every night can be annoying and sometimes can hinder you from using it for sleep tracking.

The Fitbit Versa 2 has a battery life that lasts up to 6 days on regular usage and eight days in standby usage on a full charge. The Fitbit Ionic, on the other hand, can last up to 4-5 days with mixed-use. However, with a GPS mode, it only lasts up to 10 hours.

Both watches have a battery indicator that shows when the device has a low battery level. These watches have the same charging type and USB based charging dock.

Despite being similar to each other, the Versa 2 is the clear winner in this comparison. It can do everything that the Ionic does but executes them better. It also has a more updated design and more future proof software experience.