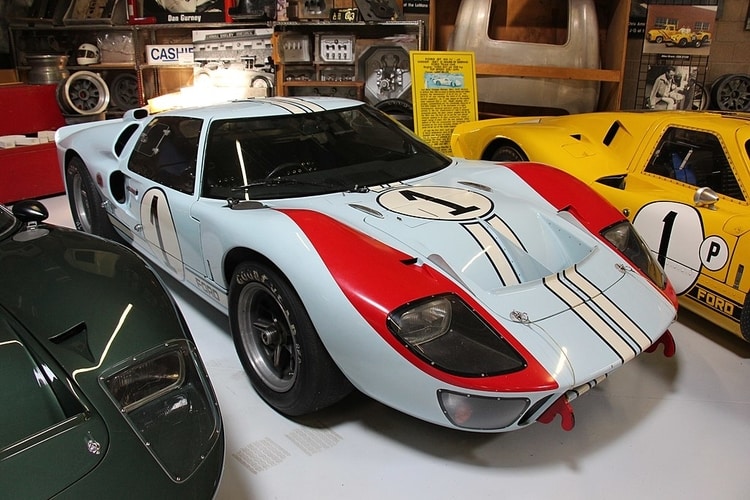 Based on a true story, Ford vs. Ferrari tells the story of how automobile giants Ford and Ferarri raced to be the winner of the prestigious Le Mans race in France. The movie also follows the story of two characters: race car driver Ken Miles (Christian Bale) and automotive designer Carroll Shelby (Matt Damon).
The movie is set in the 1960s, starting from 1963, when Enzo Ferrari declined Henry Ford II’s offer to purchase the Italian car company and securing a more profitable deal with Fiat.
This insulted Ford and drove him to get back at Ferrari by ordering Ford’s racing division to build a car that would let them beat them at the 1966 Le Mans, one of the most prestigious races in the world, that goes on for a full 24 hours.


Sports and watches go hand in hand, as timing is the most essential factor in a race such as Le Mans. This is why it’s expected that in addition to now-famous race cars (like the Ford GT40, which allowed Ford to win the race), there were important appearances of sports watches throughout the movie. In this article, we’ll take a closer look at these timepieces and talk about the companies that made them.
There isn’t going to be a lot, but these watches are some of the era’s most important models, some of which have become the basis of some of today’s sports watches.
1966 Ford GT 40 Mk II (Image Credit: Wikimedia.org)

Watches Worn in Ford vs Ferrari

One of the watches that got the most screen time in the movie is the Heuer Carrera, worn by Matt Damon, who plays Caroll Shelby.
The present-day TAG Heuer is known as a watchmaker that produces some of today’s best sport watches. The brand, which was founded in the 1860s, was called Tag, and was run by Edouard Heuer and then his son Jules-Edouard. The company has a wide range of patents made since it was introduced, making it one of the world’s most revolutionary watch companies.
The company has had a relationship with the automobile and airline industries since the 1910s, and continued to do so after they officially became TAG Heuer (they were acquired by a group called Techniques d’Avant Garde), releasing collaborations and becoming the official timekeeper of events like Formula 1.
The watch, the Heuer Carrera reference 7753 has a silver/white dial and two black subdials, a 35mm stainless steel case, and a tritium lume. This chronograph was designed by Jack Heuer with legibility in mind. According to this article by A Blog to Watch, this model was an instant hit, thanks to its clean design. Today, it’s considered a classic vintage watch that’s a good entry point if you’re into collecting vintage chronographs or vintage Heuers.
On The Dash says that they received confirmation from Tag Heuer that they, indeed, supplied the watches to the movie.
According to an article by Monochrome Watches, this model was made in the early 1970s (the movie was set in the ’60s), so there’s a possible mistake from the costume department. Nevertheless, this watch is an excellent choice for someone who’s into motorsports. Its classic design and sporty look make it excellent for both on and off the tracks.

Ken Miles, played by Christian Bale, is a mechanic and race car driving champion behind many Ford race victories like Daytona and Le Mans—most notably the story that the 1966 24 Hours of Le Mans, the main focus of the movie (Miles won the Sebring, Daytona, and Le Mans in the same year).
The watch worn by Bale in the movie was not easy to spot as he didn’t always wear it in the scenes, but sharp eyes spotted another Heuer watch—the Autavia, specifically reference 2466 T. This model has a black dial and white registers
Like Damon’s Heuer, this watch was introduced in 1968, which means that it came after the events on the film.
This is the second version of the Autavia, which was introduces in 1962. The first version had big subdials and dauphine-style hands, while the second one worn in the movies has smaller dials and stick-shaped hands. It should be noted that the second-generation Autavias were the first chronographs by the brand that had a Tachymeter bezel, which is a very useful tool for a racer.


The same On the Dash article mentions the watches worn by the actual Ken Miles and Carroll Shelby.
One of the watches that was usually seen on Miles is the Breitling Co-Pilot reference 765. The first Breitling co-pilot (ref. 765) was launched in 1953. The watch had a legible dial, as it was designed with pilots in mind. The numbers are oversized, and the engraved rotating bezel allows the pilot to have an immediate reading of elapsed time and a second-time zone.
The model owned by Miles is nicknamed the “reverse panda” because of its black dial and white subdials. The Breitling Co-Pilot watch was released in the early 1960s and became popular not just with pilots but with sports personalities as well. It is mentioned on the Breitling website that the watch was, indeed, worn by Miles.
Another famous personality associated with this watch is ski champion Jean-Claude Killy, who wore the watch when he won gold medals in the 1968 Olympics.
To learn more about the history of this model, visit Breitling’s website.
This watch has been reissued to the Breitling AVI ref. 765, a re-edition of the 1953 model. This one runs on a Breitling B09 movement and has a power reserve of up to 70 hours. This one also has a black dial with a dome Hesalite crystal, stainless steel case, and a bidirectional bezel. The 15-minute counter of this new model has the same luminescent indexes every three minutes–the same as the original.

One of the watches that Carroll Shelby was usually spotted wearing is a Rolex. According to this article, it was a GMT Master on a Jubilee bracelet.
The Rolex GMT-Master is one of the brand’s most iconic watches. It was a result of a partnership with Pan American World Airways, which wanted to have a watch for their pilots that was capable of showing the time in more than one place.
The watch has been around for 65 years and has had a number of variations. This article by Hodinkee, which calls the watch “Rolex’s most iconic travel watch,” takes a closer look at the evolution of the iconic watch. You can read about its fascinating story here.
We’ve featured a number of Rolex GMT watches on the site, like one on popular “Pepsi”-style bezel, as well as features on homage and alternative GMT models by different brands.
The present-day GMT-Master II model is a 40mm watch with a two-color Cerchrom bezel in blue and black ceramic.
This type is nicknamed the “Batman” watch because of its color and has two time zones, a 24-hour rotatable bezel, a Jubilee bracelet, and a corrosion-resistant Oystersteel. This one is powered by the 3285 movement and has a power reserve of up to 70 hours.

This is neither part of the Ford V Ferrari nor worn by any of the personalities portrayed in it, but it honors the event that made the movie possible.
GT40 Watches sell watches that honor the decade’s iconic races. One of the watches from the collection is the Ken Miles GT40 MKII chronograph.
The watch is a 45mm model with a stainless steel case, index markers, three subdials, and a day/date window at 3 pm. The watch pays homage to the GT40 by using the color scheme of the Ford car—a red bezel, light blue dial, and black/white subdials.
This watch honors Miles and the historic event that race fans and people who watch the movie know. During the final lap of the 1966 Le Mans race, Miles had a strong lead. Ford, however, asked him to slow down so that all three Ford cars will cross the finish line together. The team officials declared fellow Ford racer Bruce McLaren and his GT40 MKII, as it was the car traveling the farthest distance.
See the rest of the collection here.