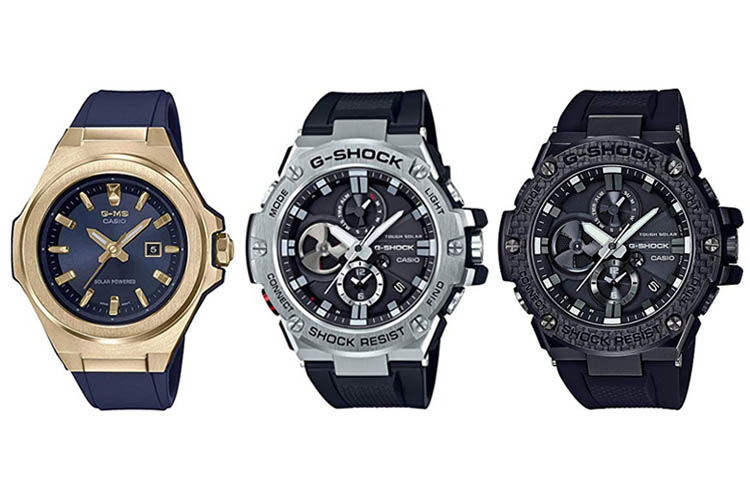 A majority of G-Shock watches generally use a digital display. The first-generation G-Shock watches back in the 80s and 90s were exclusively digital-only as they needed to separate themselves from the norm both in performance as well as appearance. For some, a digital watch simply does not deliver the level of sophistication that a traditional analog timepiece can. Hence, why G-Shock is often overlooked by traditionalists. Fortunately, G-Shock listened to the pulse of the customers and decided to tap into the analog dial watch crowd as well.
In this article, we will be taking a look at the finest G-Shock analog dial timepieces. Bringing in a sense of tradition while maintaining their impeccable durability, these G-Shock watches capture the timepiece’s essence of complexity, while also be incredibly tough as nails. For those who want the best of both worlds, there are also hybrid G-Shock watches that incorporate analog-digital dials! For now, we will be focusing on the timeless analog-only G-Shock watches.

The Baby-G MSGS500G-2A certainly doesn’t look like your typical G-Shock watch. It is neither bulky nor modern. In fact, the MSGS500G-2A can easily pass for a casual dress watch with its traditional timepiece design. But make no mistake, underneath the rather conservative appearance is the G-Shock beast that we all know and love – a perfect wristwear for the modern woman. This particular model features a blue and gold-tone design but it also comes in several color variations, all of which maintain that classy appeal.
In terms of aesthetics, the Baby-G MSGS500G features a pretty basic design with its simple case and dial. The case, which measures a sleek 42mm, is made from resin and stainless-steel to strike a balance between durability and weight. The dial features the traditional three-hand analog design and also comes with a date display over at the 3 o’clock position. Other notable features include a solar-powered battery and a 100-meter water resistance. The Baby-G series is the best alternative for those looking for a smaller and more traditional G-Shock timepiece.

The G-Steel series is one of G-Shock’s premier watch lines and there is no denying that once you see these bad boys up-close. With a design that fuses together stainless-steel and resin with a multi-layered guard construction, the G-Steel series certainly has an edge over the other G-Shock watch models. This is a premium-grade G-Shock model and as such, comes equipped with all their high-end features. One of these features includes Bluetooth connectivity which allows wearers to tap into the G-Shock Connected app via their smartphones.
Connecting to the app will further expand the GSTB100-1A’s overall capabilities. Of course, it is already quite an impressive timepiece even without Bluetooth capability. For one, it has a chronograph design which already advances its functionality by default. By utilizing Bluetooth connectivity, the GSTB100-1A can gain access to the internet and allow it to automatically adjust the time no matter where you are in the world. The G-Steel watch series also comes with LED illumination, Tough Solar technology, and a power-saving mode that optimizes the G-Steel’s energy efficiency.

Here we have an upgraded version of the GSTB100 model, the GSTB100XA. This version throws in some additional premium-grade features that further enhance the capabilities of its already impressive predecessor. The GSTB100XA model utilizes stainless-steel, resin, and carbon material to further strengthen its shock-resistance.
As with previous G-Steel models, this upgraded version still sports a Bluetooth connection and the Tough Solar technology. It also comes equipped with all the bells and whistles that you will gain from connecting to the G-Shock Connected app. The GSTB100XA-1A also comes with a dual-dial World Time display and LED backlight illumination.
The case is designed with the patented multi-layer guard design with the dial itself being protected by a sapphire crystal window. Its primary distinguishing feature is the checkered bezel which adds a level of robustness to its charm.

The G-Shock Frogman series is one of G-Shock’s tougher models that are designed specifically to conquer the outdoors. The GWFA1000 model is the first analog dial entry into this series which gives it an aesthetic advantage compared to previous models, depending on your preference. The GWFA1000 mode still features that familiar Frogman design, but rather than a digital dial, we get the classic analog version.
The newer analog dial models maintain a collection of fantastic features that elevates them from other outdoor watches. The GWFA1000-1A2 model comes with dual-time, home time, tidal graph, and dive time measurement. Since this is considered a G-Shock dive watch, the case is designed to be waterproof. It achieves this by taking carbon-fiber resin components and assembling them with the signature G-Shock multi-layer design. This gives the GWFA1000-1A2 an ISO certified 200-meter water resistance.
The Frogman GWFA1000-1A2 also comes with Bluetooth connectivity which expands its overall functionality via the G-Shock Connected app.

The MT-G watch series is G-Shock’s current top-dog and it comes with premium-quality material, build, and features. It features a 51mm stainless steel case with a black latticed pattern dial and red accents that gives it a racecar-like aesthetic. The watch also comes with Bluetooth capability, allowing it to pair with your smartphone and in turn, connect to the G-Shock app. When connected to the G-Shock Connect application, the MT-G watch can gain access to a slew of additional functionalities such as World Time and many more.
Fortunately, the MT-G model does not exactly require internet connectivity to maintain its accuracy as it is also equipped with a multi-band 6 atomic timekeeping technology. As for other notable aspects of the MTGB1000D-1A model, it has the signature G-Shock durability and default features. It is also designed to be water-resistant for up to 200-meters.

Next up, we have something for the watch collectors out there with the G-Shock HondaJet Limited Edition watch. This model’s base design is taken from the G-Shock Gravitymaster series while the Honda Aircraft Company infuses it with their own unique style. As the foundation of the build uses the Gravitymaster design, the G-Shock HondaJet watch comes with the Triple G Resist element.  Basically, this stunning limited-edition G-Shock watch is designed to withstand three gravitational acceleration forces – impact, centrifugal force, and vibration.
The case also incorporates a carbon monocoque build which gives it the same ultra-tough construction while maintaining a lighter weight. The result of this collaboration is a stylish, functional, durable, and modern analog G-Shock watch that encapsulates the spirit of the Honda Aircraft Company as well as G-Shock’s.

We have now arrived at what can be considered as G-Shock’s current pinnacle timepiece, the MRGG2000R-1A model. This G-Shock’s top luxury watch model and it certainly looks the part. The MRGG2000R watch exudes an air of elegance and sophistication while keeping its rugged charm with a highly mechanical design. It features a titanium 54.7mm case with prominent lugs and crowns that comes with striking gold-tone accents. We would also like to point out its durable rubber band which that has a Japanese Bishamon-kikko pattern that augments its overall artistic quality.
As for functionality, the MRGG2000R-1A acts as a highlight reel for G-Shock with its Bluetooth connectivity, GPS navigation, Tough Solar technology, and World Time feature, The G-Shock MRGG2000R-1A truly deserves its moniker as the current ‘King of G-Shock’.