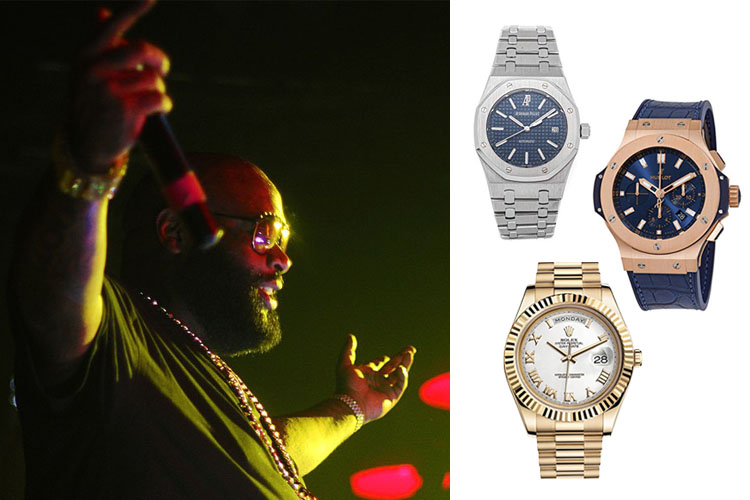 Image Credit: The Come Up Show via Creative Commons
William Leonard Roberts II, or simply Rick Ross, is known by many as an American rapper and songwriter. However, in addition to those two, Rick Ross is also a record executive and an entrepreneur.
He launched his debut single titled Hustlin and his debut album Port of Miami back in 2006. His album immediately made it on the top spot of the US Billboard 200 with 187,000 units sold in the first week. His second album, Trilla, was released in 2008 and also landed a top spot in the Billboard 200. By 2009, he started his own record company named Maybach Music Group. It is under this label that he released his succeeding albums. In 2012, Rick Ross was named the Hottest MC in the Game by MTV.
When it comes to his fashion style, Rick Ross stands out with his signature boss style. He would wear fur coats, rare sneakers, huge sunglasses, and of course, luxurious timepieces. We’ve listed here a few watches that were seen on his wrist.


Rick Ross has been frequently seen with Audemars Piguet Royal Oak timepieces. Most are diamond-encrusted although he also has a few that are factory versions.
Audemars Piguet Royal Oak models are a common favorite among rappers and other celebrities. No wonder that Audemars Piguet is typically mentioned in their songs.
The said collection was first launched back in 1972. The watches come with bold and angular designs that were new in the watch industry back then. Audemars Piguet Royal Oaks are built with stainless steel and have a distinctive octagonal bezel with hexagonal screws. Another key part of the Royal Oak is its tapiserrie dial that adds subtle detail to its watch face.
If you want the look of a Royal Oak but can’t afford a luxury timepiece, we’ve also prepared a separate post on Audemars Piguet Royal Oak Alternatives (Hommage Watches )


For Ross’s 36th birthday, Dr. Dre (another American rapper) gave him a Hublot Big Bang as a present. The said timepiece costs about $100,000 because it is encrusted with 248 diamonds that weighs 2.05 carats and 126 smaller ones weighing 1.29 carats.
He also has another Hublot Big Bang that comes with white diamonds and is priced at $35,000. Hublot Big Bang was first launched in 2005. Since then, it has been a best seller collection of the Swiss watch brand. Hublot Big Bang watches share a standard “porthole” design and the H-shaped screws on the bezel. Then, throughout the years, various models of the Hublot Big Bang were launched featuring textured and skeletonized dials, jewel adornment, colorful straps, and of course, meticulous complications. There were also a few limited-edition models that have quickly caught the attention of watch collectors from around the globe.  See affordable alternatives to the Hublot Big Bang.


In the trailer for his single titled “Live Fast, Die Young”, Ross wore his yellow gold Rolex The President. This timepiece that has become a symbol of stature seems to appropriately match the Rolls Royce Ghost that served as Ross’ ride in the video.
Aside from his factory version Rolex The President, Rick Ross also posted a diamond-encrusted version on Facebook with green dial and diamond-set Roman numeral hour markers.
Diamond-set or not, the watch is very distinctive with its fully-spelled day window at 12 o’clock and a magnified date window at 3. Aside from its display, Rolex The President is also waterproof and has a self-winding mechanical movement. More so, coming from the world-renowned brand, you can expect nothing less from this model. Aside from its design, the materials used and the craftsmanship are impressive as well.
Can’t afford Rolex or can’t justify the price? We also have a separate post on  Rolex Day-Date affordable Alternatives


Another distinctive timepiece that Ross had customized and set with diamonds is a silver-toned Cartier Ballon Bleu. Even the factory version of the timepiece is already a symbol of elegance with its bold and sword-shaped Roman numeral hour markers and the blue bubble on its encased crown.
Cartier is the watch brand that’s famous for its iconic watch shapes such as the Cartier Tank, Santos, Crash, and Tortue. Because of the success of the said collections, it then posed a challenge for the brand to have a round watch collection again. Then came the Cartier Ballon Bleu. It is indeed circular yet how the crown is also encased made it more distinctive from other watches. If you wish to have your own Cartier Ballon Bleu, you may choose from the various models available on Amazon.