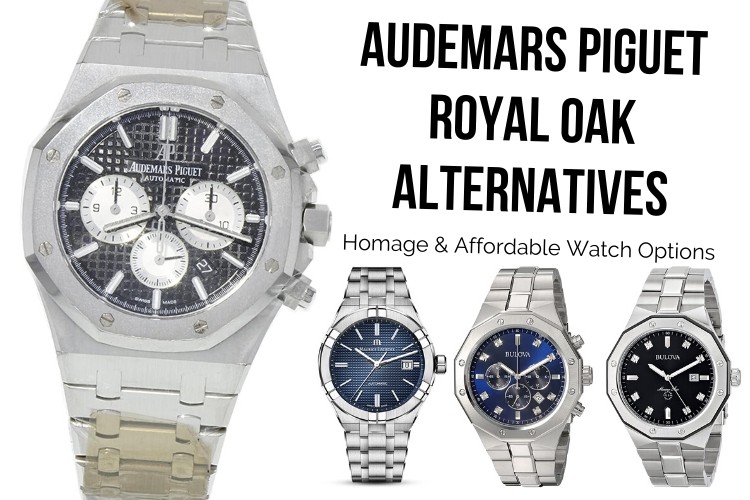 The Audemars Piguet Royal Oak is an iconic watch launched during the Quartz crisis. It is particularly notable for its steel case, octagonal bezel with eight hexagonal screws, along with an integrated bracelet. This luxury steel timepiece, although disconcerting when it was first launched, later received overwhelming support in the watch market because of its revolutionary design. Should you wish to purchase one, many of the models go for forty thousand dollars while more limited models go for twice that.  You may also check out authentic pre-owned Royal Oak Offshore models from this link, while they are still very inexpensive, you can occasionally pick one up for a more relatively affordable price.

The Royal Oak is associated with the wealthy celebrities, its part of Arnold Schwarzenegger’s watch collection and worn by hollywood stars as well as fictional characters such as Bobby Axelrod in Billions.

If that’s still quite too much, then don’t worry. In this post, we’ll give you some great alternatives to Audemars Piguet Royal Oak offered at more affordable price points.

As mentioned above, the Audemars Piguet (AP) Royal Oak was bravely introduced to the watch market during the Quartz crisis. During such a period, Swiss manufacturers were about to face financial collapse and Audemars Piguet knew that something must be done to prevent this from happening. Then, the company decided on producing an all-original steel luxury watch that’s both sporty and elegant. This was made possible by watch designer Gerald Genta, who later stated that the Royal Oak was “the masterpiece of his career”.

In April of 1972, the iconic Audemars Piguet Royal Oak was launched at the annual Swiss Watch Show (now known as the BaselWorld). It was designed after the traditional diver’s helmet, slim and mainly made of steel, along with the complex stainless steel bracelet. The movement used was Calibre 2121 that beats at 19,800 vibrations per hour and with an anti-shock system that’s particularly suitable for a sports watch.

Moreover, the name Royal Oak is nautical-related in line with the design’s theme that was inspired by a diver’s brass helmet. The name Royal Oak is patterned after the name of a series of eight vessels of Britain’s Royal Navy. Such a name was also originally used to pertain to the hollowed oak tree wherein King Charles II of England hid to escape the Roundheads.

Undeniably, the Bulova Royal Oak is a great AP Royal Oak homage. Despite being launched years after, there are rumors that it was designed before the AP Royal Oak considering that the designer Gerald Genta worked in Bulova before transferring to Audemars Piguet. Regardless, Bulova is known for manufacturing the best homage watches such as this one.

Another recommended AP Royal Oak homage from this watch forum discussion is the Didun Royal Oak.

As such, it also looks very similar to AP Royal Oak with its stainless steel case, octagonal bezel with screws, and integrated bracelet. Its case, however, is quite bigger than that of AP Royal Oak as it measures 41mm. It also comes with a date feature at 3 o’clock, a sapphire crystal window, and an automatic self-winding movement. Its water resistance is up to 100 meters.

Overall, it exudes a luxurious look as well yet it is, in fact, very affordable.

Another older alternative watch is the Citizen Eco-Drive Signature Octavia BL5460-51E. It is also a stainless steel timepiece, loaded with various features such as the perpetual calendar, chronograph, alarm, and date function.

It also has a hexagonal bezel yet with softer angles, making it almost circular. Yet, you would still see eight screws marking each apex. Aside from the above-mentioned features, its black dial comes with luminous hands and it uses an anti-reflective sapphire crystal as the dial window. For the movement, it comes with Japanese quartz. Despite this, since it uses Eco-Drive technology, it doesn’t need any battery as any form of light is enough to power it. This watch is also water-resistant to 100 meters.

Although a brand new Bulova Royal Oak is already obsolete, there are AP Royal Oak alternatives from the brand that you may also consider.

One of them is the Bulova 98D103. This one’s very much affordable yet also stylish and sleek. It still comes with a stainless steel case and bracelet. However, its bezel deviated a bit from the octagonal design as this one comes with a dodecagonal (12-sided) bezel with eight screws.

The case measures 44mm with a mineral crystal window. The dial is black, with silver-toned hands. The hour markers, however, are mostly hand-set diamonds except for the 3, 6, 9 and 12 that are marked only with silver-toned thick indices. It also has a date feature at 3 o’clock position. Its movement is Japanese quartz and it is water-resistant to 100 meters.

Bulova 96D138 is another great option for you. This timepiece features a stainless steel case and bracelet and also has a dodecagonal bezel with eight screws on it.

Compared to the above-listed Bulova alternative, its dial is quite more complex as this one has three chronograph sub-dials located at 3, 6, and 9 o’clock positions. It also comes with eight hand-set diamonds and a date feature between the 4 and 5 o’clock position. The bracelet features a double-press fold-over buckle with a safety bar and extender. It is also water-resistant to 100 meters.

The Maurice Lacroix Aikon also pays respect to the AP Royal Oak with its Guilloche dial, baton-style hands, and date feature at 3 o’clock. However, it shuns away from the octagonal bezel and screws so as not to be another look-alike.

It also has a 42mm stainless steel case and a bracelet with a deployment buckle clasp. Its bezel is circular marked with six accents. It comes with an automatic self-winding ML115 movement with a power reserve of up to 38 hours. More so, it is water-resistant to 200 meters. Read more about Maurice Lacroix watches here.

Now, this particular timepiece is the choice for our women readers.

Yes, Baume & Mercier Riviera is a stylish sports watch for women. It comes with a stainless steel case and a black sleek rubber strap with a deployment clasp. This one also has a dodecagonal bezel with four diamond accents (instead of screws). The black dial is smoothly marked with geometric lines. It also has a date window at 6 o’clock and luminous watch hands. It uses the Swiss-quartz movement and is water-resistant to 50 meters.  Read more about Baume & Mercier here.

This next AP Royal Oak alternative is another timepiece designed by Gerald Genta. As such, one notable similarity is its integrated bracelet.

The Omega Constellation is another sleek steel watch. Its case, bezel, and bracelet are all made of stainless steel. Its circular bezel is marked with Roman numerals, instead of the Royal Oak’s screws. Its dial is silver-toned and comes with silver-toned hour markers and luminous hands. It also has a date window at 3 o’clock. The dial is then covered by a scratch-resistant anti-reflective sapphire crystal. It uses a quartz movement and is water-resistant to 100 meters.

If you have quite a more flexible budget, the IWC Ingenieur is an AP Royal Oak alternative that is both stylish and of premium quality build. It’s not surprising for this is also designed by the Royal Oak designer, Gerald Genta.

It is mainly made of polished stainless steel for the case, bezel, and bracelet. The bezel may not have screws on it but you’d notice five small circular markings. Its dial is black with luminous markers and hands. It also features 24-hour Arabic numeral marking on the outer rim of the dial. At 3 o’clock, is a date window. It uses an automatic Swiss movement. The whole dial is protected by a sapphire crystal glass. Its water resistance rating is up to 120 meters.

Last is another high-end alternative, the Bulgari Octo. It also pays respect to the AP Royal Oak but instead of the bezel, its dial is the one that’s octagonal in shape. It is then surrounded by a circular bezel. Its dial also has a date window, simple hour and minute markers with Arabic numerals at 6 and 12 o’clock. Its case is made of titanium and the timepiece is powered by a self-winding automatic movement with a power reserve of up to 50 hours.