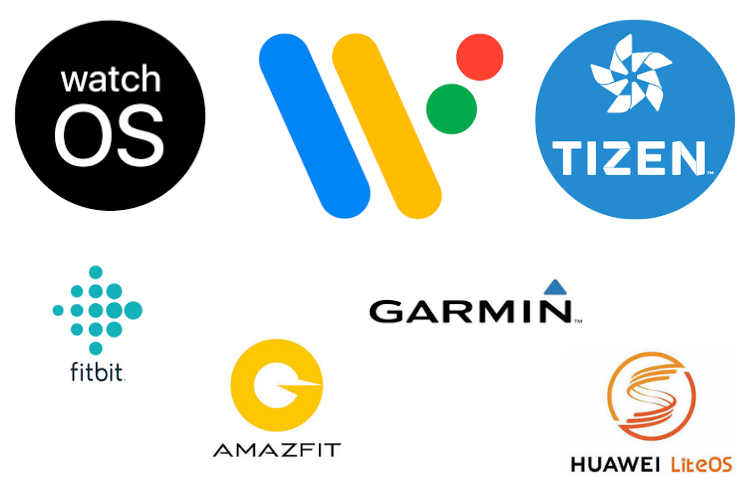 Smartwatches come in all shapes and sizes, but it’s not just their looks that vary from device to device. Under the hood, each smartwatch runs on a specific smartwatch platform as decided by the manufacturer.
Some manufacturers, such as Samsung and Fitbit, have developed their own proprietary platforms as a point of difference, whilst others use Google’s open-source WearOS platform and use their design and branding as a way of standing out.
No platform is 100% perfect. In this guide, I’ll run through all of the smartwatch operating systems currently in the market and list the pros and cons of each.


WearOS (previously Android Wear) is the wearable platform developed by Google. Whilst Google doesn’t make their own smartwatches, the platform is used by several other manufacturers including Sony, Mobvoi, Fossil, Skagen, and Michael Kors.
WearOS is a slimmed-down version of Android and therefore integrates very well with Android phones, although Google has been working to add more features for iPhone users in recent updates.
As for input, it primarily uses a touch screen, many manufacturers have also added a crown dial that can be used for scrolling through the apps.
Although some WearOS watches have their own watch faces and custom launchers from the manufacturer, for the most-part, WearOS offers a unified experience with the same user interface and large app selection, which makes it very easy for switching between brands.
WearOS allows you to make and receive phone calls from your Android phone (providing the watch has a speaker and microphone), or without your phone if the watch has LTE connectivity. It also allows you to respond to messages from your notifications, however, you cannot scroll back through previous messages.
Pros/Cons:

Integrates with both Android and iPhone.

Cannot scroll back through your texts


Next, we have Apple’s watch operating system that’s based on iOS, aptly named watchOS. The platform is well designed with a sleek user interface that also uses a crown dial and touchscreen.
Unlike most other platforms, watchOS will only work with an iPhone, although this is no surprise given it’s an Apple platform. It has Apple’s ecosystem built right in, including Apple Music, Apple Pay, and iMessage.
Similar to WearOS, watchOS also has a huge number of third-party apps that can be downloaded to the watch including some exclusive apps such as American Airlines that lets you put a boarding card on your wrist.
watchOS has full support for making and receiving calls on your watch, this can be through your iPhone or via built-in cellular connectivity on certain Apple Watches.
Pros/Cons:

Large selection of apps third-party and Apple’s own apps including Apple Music, Siri, and Apple Health.

Make and receive calls via your iPhone (or tether-free with an LTE-enabled device).

Reply to texts, iMessage, and Whatsapp from your wrist.

Scribble allows you to handwrite on the screen and it’s turned to text.

Only works with iPhones.


Tizen is the operating system found on Samsung’s smartwatches and in their smart TVs. It’s an open-source platform that has been jointly developed by Intel and Samsung, although no other manufacturers use it. It’s very similar to WearOS, but more lightweight and without Google’s ecosystem of apps.
The interface on Tizen tends to be tied to the rotating bezel that features on Samsung smartwatches which makes it easy to scroll through apps and messages.
The platform does support third-party apps, however, there are relatively few available as most of the features use native Samsung apps. These can be hit or miss, for example, Samsung Health is a very strong app for monitoring your health and fitness, whereas Bixby is Samsung’s voice assistant which doesn’t come close in functionality to Siri or Google Assistant.
Pros/Cons:

Interface allows the use of a rotating bezel for smooth scrolling

Integrates with both Android and iPhone

Make and receive calls via your watch.


A standout feature is Garmin Coach which provides adaptive training plans. These have been developed in conjunction with professional coaches but will be personalized based on your performance as measured by the watch’s sensors.
When it comes to interacting with notifications, you can reply to messages, however, you are limited to quick responses which can be pre-set on the Garmin Connect app on your phone.
You cannot use Garmin watches for making or receiving calls, even if your device has the right hardware. It does allow you to accept or decline calls, however, if you accept the call you’ll still need to use your smartphone for the actual call.
There are lots of widgets for customization of the watch face, from your daily step count to how many cups of water you’ve drunk. Garmin has a good selection of streaming apps that allow you to download music to your device, including Spotify, Deezer, and Amazon Music.
It has a huge number of sports tracking features including a long list of supported activities, some with onscreen animations to guide you such as the yoga workout which shows each pose on the screen.
Pros/Cons:

Download music to your watch from Spotify, Deezer, and Amazon Music.

Messaging is limited to quick responses

Cannot use the watch for calls

No voice assistant (except for a handful of voice commands)


Fitbit has been synonymous with fitness trackers for many years and they’ve used this position to push into the smartwatch market with their Fitbit OS platform. Fitbit OS can be used with both Android and iPhone, however, some features are limited to Android such as the ability to respond to text messages.
It can collect data from a variety of fitness sensors, tracking exercise, stress, food intake, sleep, and more.
Being a fitness-focused platform, one key feature is the ability to download music for offline listening. Fitbit OS works in a slightly different way as you can need to sync tracks via the Fitbit Connect app, services currently supported are Deezer, Pandora, and MP3, although Spotify is currently not integrated for offline listening.
You’ll have more than enough voice assistants as Fitbit OS is the only smartwatch platform to have both Alexa and Google Assistant built-in. However, both assistants respond to you in text form rather than speaking back.
Pros/Cons:

No offline listening for Spotify

Cannot send messages via Fitbit OS when connected to an iPhone


Lite OS is a Linux-based smartwatch platform created by Huawei and used in their own smartwatches. It is also used in Honor smartwatches which was previously owned by Huawei.
The watch can be paired to both Androids and iPhones, with most features working for both platforms. However, media controls do seem to be more limited on iPhone.
With Lite OS, you can make and receive calls using your watch, this works for both Android and iPhone. However, messages are more limited as you can only read messages but there’s no ability to respond to them from the watch.
Lite OS doesn’t allow any third-party apps to be installed so you are limited to those that have been developed and pre-installed by Huawei. The platform seems to take aim at the health and fitness market with data from the watch sensors compiled in the Huawei Health app on your smartphone. This app is all-encompassing and allows tracking of exercise, steps, sleep, stress, and more.
The lack of third-party apps makes music streaming very limited. You can play/pause/skip music on Android and that’s about it. You cannot look through playlists or download music for offline listening via the streaming services. Although, you can load MP3s onto Lite OS watches that have internal storage.
Pros/Cons:

Works with Android and iPhone

Make and receive calls with your watch

Cannot respond to messages with watch

No voice assistant or contactless payments


Amazfit is relatively new to the smartwatch game but their devices are causing a buzz thanks in part to their lightweight proprietary operating system that offers an excellent battery life.
The platform was developed jointly with Huawei, as such, many of the limitations of Lite OS can also be found on Amazfit’s watches.
Due to the lightweight nature of the platform, it’s very limited in functionality. For example, you cannot make or receive calls on the watch, and messaging is limited to reading messages only, you can’t respond to them on the watch itself.
Amazfit’s platform doesn’t allow you to install third-party apps so you won’t be able to download music from streaming services. However, you do still have basic music controls if you’re playing music via your smartphone.
Pros/Cons:

Cannot make/receive calls with the watch

Can only read messages, no way to respond from the watch

As with all technology, smartwatch operating systems come and go over time. Here are a few popular platforms that have gone to the smartwatch graveyard:


Back when WearOS (then Android Wear) was the only real operating system worth considering, Pebble was a start-up that took aim at the poor battery life of Wear OS by launching Pebble OS.
The crowdsourced watch was one of the most successful campaigns on Kickstarter at the time but the brand has since been discontinued, although its staff and intellectual property were rolled into Fitbit and likely helped with their smartwatch platform.

Remember the Microsoft band? You probably don’t because it was a major flop. It ran Microsoft Health which was a fitness-focused platform that incorporated their Cortana voice assistant.