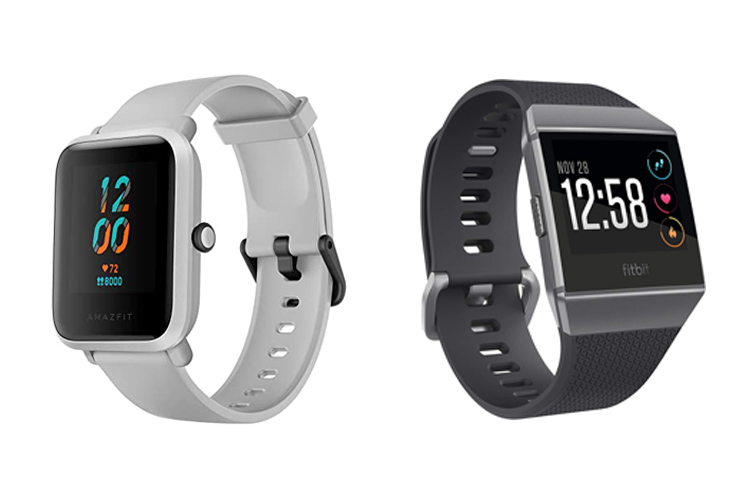 Amazfit is a newer smartwatch brand. They are a US-based company that was only established in 2016. However, they have mostly been getting more attention due to the number of products they produce each year.
They are owned by Huami, who is currently the exclusive partner of Xiaomi. Together, they have become the second-largest wearable manufacturer. This is an impressive feat, given their relatively young age in the industry.
Their current lineup is more diverse and targets a wide range of audiences. They have budget offerings such as the Pace series and more high-end watches such as the Stratos Series. The Amazfit GTS is, of course, part of their midrange series aimed at casual users.

Fitbit is an American fitness and health brand founded in 2007. With its innovative health-focused products, Fitbit spearheaded its way to the top of the wearable competition.
Fitbit’s smartwatches offer similar features to high-end alternatives such as the Apple Watch and the various Wear OS watches. But one edge that they have over their competitors is their background in health and fitness. With their watches, they can bring innovative ideas that help improve the lives of their users.
Overall, Fitbit is a serious competitor in the smartwatch market. Keep on scrolling to find out how well one of their earlier models, the Ionic, fares against competitors such as Amazfit’s offerings.

The Design of the Bip S has a more modern and clean look similar to the likes of the Apple Watch. The Fitbit Ionic, on the other hand, has a more boxy design that may look outdated by today’s standards. Fitbit was going for a more futuristic look with the Ionic, but it doesn’t quite seem to sit as well with the rest of its competitors.
The Amazfit Bip S is light and comfortable to wear.  This is mainly due to the polycarbonate construction and silicone straps. There is a digital crown on the right side that can be used to wake up the watch and also as a back button while you’re in the interface.
The Bip S has four Color options available; carbon black, white rock, red-orange, and warm pink. The Bip S’ strap material is made of silicone and is detachable. They can be easily replaced with Amazfit’s straps or any other third-party strap of the same size.
The Fitbit Ionic, on the other hand, has an aluminum build that is lighter than most smartwatches. It has three color options available. It comes in Blue Gray, Slate Blue, and Charcoal. The watch band is made of elastomer and comes in two sizes; 140 – 180 mm for smaller wrists 180-220mm for larger wrists. The Fitbit Ionic features three physical buttons, which are always helpful with navigation.

Both smartwatches are lightweight. The Fitbit Ionic weighs 30 grams while the Amazfit Bip S only weighs 31 grams. Both smartwatches are also relatively compact. The Ionic has the following dimension: 38 x 45 x 12 mm. The Bip S, on the other hand, has the following dimensions 42 x 35.3 x 11.4mm.
Given their weight and size, both watches should be comfortable to wear and should not cause any discomfort throughout the day. The straps on both models are replaceable in case you want a different aesthetics or different materials.


Both the Amazfit Bip S and Fitbit Ionic have the same basic features typically found on smartwatches at this price range. Both of these watches give various alerts and notifications, such as phone calls. You can also interact with these notifications in different ways. Incoming phone calls, for example, can be muted or rejected by the user.
Other examples of notifications that you can receive are email, SMS, and other installed applications permitted to be accessed by the watches. However, you have to take note that both the Ionic and Fitbit S do not give you the option to reply to chats and text messages. Both smartwatches give a fairly strong and noticeable vibration whenever you receive a notification.
It also has an event reminder, weather, and third-party apps.  It has clock features like time/date, alarm clock, and stopwatch.   There are also three new smart features for Ionic – Fitbit Pay, Fitbit App Gallery, and music storage.
The Bip S and Ionic feature of inactivity alerts. Whenever you are idle for a long time, it will alert you and encourage you to stay active.  The Ionic watch has a unique way of alerting for inactivity.
It does a good move reminder feature, which typically for most devices has a general like hourly reminder like get up and move, but for Fitbit, they make it a goal, so every hour, you have to hit your step goal.
Both watches also include access to the online portal.  Your tracking data is uploaded via your smartphone or computer and is available to view on in the form of reports and graphs.
Despite their similarities, the Fitbit Ionic has some features absent in the Amazfit Bip S. The Ionic has a “Find My Phone” feature that is especially useful if you misplace your smartphone. The Ionic also has some unique social features that are not usually present on most smartwatches.
One example is the integration of a friends list on the Fitbit App. You can compete with friends who are using the Fitbit App and Fitbit smartwatches and compete with their workout records and statistics. This clever integration encourages users to work out more or encourages friends and family to purchase similar Fitbit smartwatches.
Additionally, the Fitbit Ionic can be used with Fitbit Coach. This is an application that can recommend workouts depending on the activities tracked by your Fitbit smartwatch.
The Fitbit Ionic can control the media being played on your smartphone. It can also store up to 300 hundred songs on your smartwatch.  Additionally, the Fitbit Ionic can connect to Wi-Fi to access streaming services such as Deezer and Pandora.
And also, the Ionic comes with other smartwatch functions like Fitbit pay, offline music, phone notifications, weather, and many other fancy add-ons.  It has a partnership with pandora for phone-free listening. 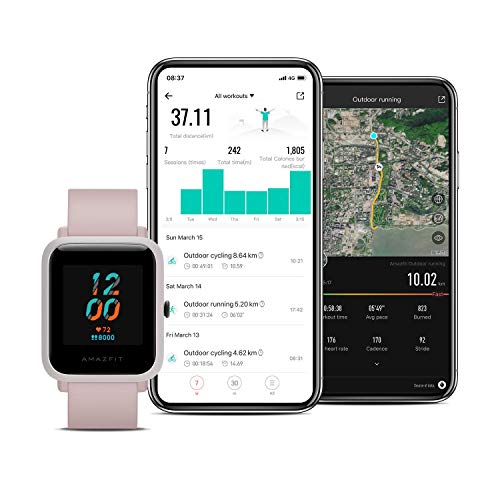 The Amazfit Bip S features several sensors, such as the BioTracker TMPPG Bio-Tracking Optical Sensor, 3-axis acceleration sensor, 3-axis geomagnetic sensor, and ambient light sensor. The Bip S can track activities such as distance, steps, sleep, and pace. Additionally, it can provide activity reports and sleep reports.  It can also count calories and calorie burn.
The Fitbit Ionic also comes with several sensors, such as the 3-axis accelerometer, 3-axis gyroscope, optical heart rate monitor, altimeter, and ambient light sensor. The Ionic has more health tracking features than the Bip S. It tracks sleep, steps, floors climbed, heart rate, calories, distance, stress, VO2 max, and menstrual cycle. It also measures blood oxygenation to help ID health conditions such as sleep apnea.
Additionally, several other features are not present in the Bip S. Some of these are the Gyroscope, Altimeter, VO2 max, and weight tracking. The Ionic also detects activity automatically, tracks elevation, weight tracking, tracks calorie intake, and water intake while the Bip S has a stroke recognition, which is absent with the Ionic.
Given these two watches’ price points, there are some notable missing features such as cadence sensor, temperature sensor, perspiration, and 3D compass.  Both watches have a stroke counter for swimming, multi-sports mode, goal setting, and exercise tagging.
In terms of their accuracy, the Amazfit  Bip S gave more precise results for activities that involved running and measuring distance. In contrast, the Fitbit Ionic gave more accurate results for calories burnt more. However, both smartwatches were fairly accurate and did not have major issues.
Given Fitbit’s specialty in fitness tracking, the experience you get with the Ionic is more similar to a personal trainer than the Bip S. Aside from tracking activities; it can also interpret your data and make recommendations.
The Ionic, on the other hand, is more goal-oriented. It is only dependent on the goals that you have set. There are very limited tools to analyze the data.

The Amazfit Bip S is better than the Fitbit Ionic in terms of its battery life. The Bip S can last up to 40 days with regular use, which is very impressive. If you use most of its features, it will only last up to 15 days. And when using the GPS, the watch will only last up to 22 hours. The Fitbit Ionic, on the other hand, can last up to five days with mixed usage. And with a GPS mode, it only lasts up to 10 hours.
Both watches have a battery indicator that shows when the device has a low battery level. The charging time of the Bip S is slightly longer than the Ionic.  The Bip S requires  2.5 hours to fully charge, while the Ionic only takes 2 hours.
Both watches feature a non-removable battery. They also do not feature any form of wireless charging. The charging type in Amazfit Bip S has a 2-pins POGO pin while the Fitbit Ionic has a USB based charging dock.

Overall, despite being the older model, the Fitbit Ionic is still the clear choice. It has more features, more premium materials, and a better smartphone app. While the Amazfit Bip S is not bad for what it is, you will still get more value out of the Fitbit Ionic, especially if you will mostly be using it for your workout sessions.