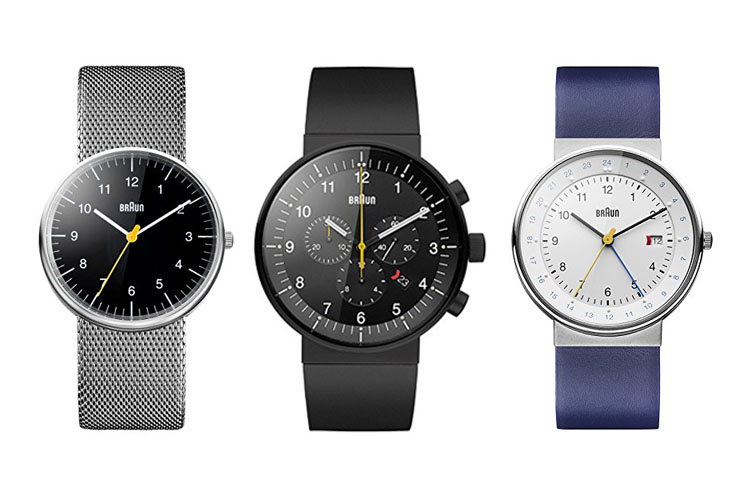 In this article, we will be taking a look at the Braun watch company. Braun has been around for quite some time and offers elegantly designed timepieces for a relatively affordable price.  Braun timepieces are best known for their minimalist aesthetics. This particular aspect of their watches helped propel Braun into its own – an amazing feat in a market that is saturated by different types of watches.

Let us take a closer look at Braun and their timepiece collections to get a good handle as to where their place within the watchmaker hierarchy lies.

Braun was founded by mechanical engineer, Max Braun, who started the company as an engineering shop in Frankfurt am Main in 1921. Initially known for developing components for radios, the company officially became known as Braun around 1935 but was still in the business of producing radio sets. By around the 1950s, Braun started manufacturing timepieces well into its storied history – 1977, in fact, was the year where Braun released its first watch collection. This is why Braun is not exactly a staple name in watch aficionado circles, as the brand is primarily known for its top-notch electric shaver series. Other notable watch series that Braun released came in 1989 and 2003

However, after the American multinational corporation took over the Gillette Company, this merger also included Braun (which at this point was under Gillette). This happened in 2005 and four years later, P&G canceled the production of Braun timepieces in Germany. Braun’s license for manufacturing watches was then sold to ZEON, Ltd. – a British company that licenses fashion and other consumer brands. Fortunately, ZEON, Ltd. transferred Braun over to the Swiss watch designer company, Ventura, which continued designing and developing Braun watches.

Ventura and Braun started developing modern and innovatively designed timepieces that focus on experimentation even more than the original vision that Braun has for its watch collections. With Ventura manning the helm, Braun watches became one of the most sophisticated timepieces that were also infused with high-tech digital watch technologies. This also led to the debut of their popular BN0106 watch model down the line.

However, it wasn’t until 2010 when Braun finally unveiled a new series of watches which was design by Pierre Nobs (Ventura) and Professor Oliver Grabes (chief designer at Braun). In 2011, Braun released their new BN watch collection, spearheaded by the BN0011 to BN0115 watch models. However, this next-generation Braun watches lost its “Made in Germany” signature anymore as development is now done in China. Fortunately, ZEON, Ltd. saw the importance of tradition in watchmaking and once again developed two watch models: the BN0095 Prestige Chronograph and the BN106 Prestige Digital, which both once again came with the “Made in Germany” stamp.

Over the next couple of years, Braun watches will continue to rise up the ranks with their affinity for experimentation. This can be seen with their BN0142 GMT watch and the ultra-slim timepiece model – BN0211 Slim and its high-end version, the Prestige Slim. Braun watches also dabbled in ceramic timepieces with their BN0172 watch model. To this day, Braun is still going strong and has now firmly returned to its roots as its watches are now manufactured in Germany.

The current generation of Braun watches all have that slick and minimalistic aesthetic that makes them quite appealing to the modern generation of watch enthusiasts. Braun timepieces focus more on practicality and simplicity which is definitely one of the brand’s most charming traits. Below are some of Braun’s flagship watch models that highlight the brand’s signature style.

Let us start off with a Braun timepiece that best encapsulates the brand’s style, the Braun Analogue Classic. This timepiece is a minimalist and sleek watch that is quite subdued with its presentation. It features a 38mm stainless steel case which is around 8mm thick. The strap is also made from stainless steel but utilizes a mesh design for that added visual flair.

The dial is relatively simple and is eligible with its plain black watch face with small white numerical hour markers. The hour and minute hands also incorporate a white tone finish while the seconds hand feature a yellow color tone to add a simple yet highly visible splash of color.

Underneath the hood of the Braun Analogue Classic is a high-precision quartz movement with an analog display. The dial is encased within a durable mineral crystal window which is both shatter and scratch-resistant. Additionally, the watch is designed to deliver up to 50-meters of water resistance rating which means it will be able to easily withstand splashes of water and brief immersions.

Braun’s higher-end series is the Prestige collection. The Prestige Chronograph features a modern take with its aesthetics and uses black ion-plated stainless steel 43mm case which an 11mm thickness. Similar to the case, the strap is also made from stainless steel with a black ion-plated finish with a deployment clasp that is nicely hidden and blends seamlessly into the strap’s design.

This Braun timepiece incorporates a chronograph design which enhances its overall functionality. The three sub-dials are evenly positioned over the main dial and avoid that cluttered feel that some chronograph watches suffer from. The sub-dials display hours (12), minutes (30), and seconds (60). There is also a date display that is neatly tucked in the 4 o’clock position.

Within the Braun Prestige Chronograph Watch lies a Swiss quartz movement with an analog display. This timepiece also did not skimp on improving durability as it uses scratch-resistant sapphire crystal glass. As with the Analogue Classic, the Prestige Chronograph also features a build that provides the watch with 50-meter water resistance.

The Braun Minimalist GMT Watch infuses modern aesthetics with enhanced functionality. It comes in with a 40mm stainless steel case which is surprisingly slick with a 7mm thickness. The blue genuine leather perfectly complements the silver-toned case which gives it a laid-back charm. As the name suggests, this Braun timepiece features GMT functionality, a dual time zone, to be precise. You can check the blue-toned hand to check the second time zone on the fly. An additional feature included is a date display over on the 3 o’clock position.

Inside the stainless-steel casing is a quartz movement with an analog dial display. The watch movement is battery operated as well. As for the dial window, it is made from mineral crystal glass which delivered good results in shatter and scratch resistance tests. This timepiece also comes with 50-meter water resistance.

Braun is a German consumer goods brand that has a wealth of products under its belt. While Braun has changed a lot since its initial conception back in 1921, it still holds its core values in tow to this day. Mostly known for their electric shaver products, which are top-tier level, if I might say so, they also have some pretty underrated timepieces in their catalog. As for their watches, expect a decent timepiece that delivers more of a modern minimalistic twist with reputable German quality craftsmanship.

Is Braun a Good Watch Brand?

Many of our readers are not familiar with Braun watches, which is understandable given that they are more known in the grooming appliances market. That said, their wristwatches proved to be something that you should not overlook. Braun watches focus on minimalist designed and are reasonably priced as well.

As a watch brand, they don’t hold as high prestige as say Longines or even other German watches such as Zeppelin. However, while their name may not hold the same weight, they still manage to deliver some excellent timepieces that, as a watch aficionado, you should definitely check out for yourself.  Many people like the industrial look of their watches and trust the brand because of its 100-year history of engineering. Others have compared the brand to Mondaine for similar reasons – an early history of making clocks first and a similar design aesthetic and price range.

Where to Buy Braun Watches?

Braun watches are available through their official website, braun-clocks.com, but they are also generally easy to find online on Amazon and eBay, and other online retailers such as FarFetch.

Where Are Braun Watches Made?

Braun watches also come with a warranty. You will need to sign up to their official website to register and avail the warranty for your Braun timepiece. You can do so, here. All Braun watches come with a two-year warranty from the date of purchase. The warranty covers part defects and, if viable for the option, Braun can offer you a full replacement of the watch.