Samsung is easily one of the most recognizable brands in the world. They are one of the world leaders when it comes to electronics. Their Samsung Galaxy smartphones, in particular, are often considered as a top 3 flagship smartphone in the respective year that they were released.
But, of course, that alone does not automatically make them a top smartwatch manufacturer as well. So in this article, we will be learning more about Samsung’s history. We will ultimately be dissecting whether or not their smartwatch division is on par or better than the rest of its competition.

Samsung had its humble beginnings in South Korea. It was originally founded as a grocery trading store in 1938 by Lee Byung-Chull. They primarily traded different goods such as noodles to different parts of the country. After the war, the business was further expanded into textiles, before ultimately expanding to electronics.
Samsung started to enter the electronics market during the 1970s. They initially started manufacturing black-and-white televisions before moving on to other home electronics. They were also rapidly gaining market share in the semiconductor industry. They were also starting to export products during this period.

Throughout the 2000s, Samsung competed in the smartphone industry. But it was in 2009 where they first released the first Samsung Galaxy smartphone that was intended as a direct competitor to the Apple iPhone that came out in 2007.
Samsung continued its success not only in smartphones but also in other electronics as well. It was during this period where they released several products such as the Samsung Gear wearables and accessories, Samsung Galaxy tablets, and many others. And in 2015, Samsung overtook Apple and became the number one smartphone manufacturer.

Today, Samsung is pretty much a leader in all kinds of electronics. Every year, consumers who want the most premium enthusiast options are always waiting for the Samsung Galaxy S and Note releases. They are also famous in the wearable market thanks to products such as the Samsung Galaxy Watch 3 and Samsung Galaxy Buds.
Samsung is also known in the rapidly growing esports industry. They had an esports organization based in South Korea known as Samsung Galaxy. This organization has won two world championships in League of Legends, one in 2014 and one in 2017. Several products, such as their headphones, smartphones, and watches, were often seen being used and promoted by the team.
The Samsung Galaxy Korean team was later acquired by KSV, later known as Gen G, in 2019. Despite not having an organization carrying their name anymore, Samsung’s presence is still very strong in esports as they currently sponsor leagues, international events, and organizations with their monitors, SSD’s, watches, and other peripherals.

Samsung has been in the competition for a long time. Their smartwatches were initially carrying the Samsung Gear branding. But in 2018, they decided to do a refresh and simplify their lineup.
Their current smartwatch offering is currently comprised of the Samsung Galaxy Watch series. There are currently two categories in this series, the Galaxy Watch Series for most consumers and the Galaxy Active Series for fitness enthusiasts and athletes.
For an updated list – check out the current top Samsung smartwatches here.

The Samsung Galaxy Watch 3 is currently Samsung’s flagship smartwatch. It is the sequel to the original Galaxy Watch that was first released in 2018. It has the same design language as the original but hosts a lot of improvements for 2020. While the Galaxy Watch 3 is technically the Galaxy Watch 2, Samsung chose to name it as such to avoid confusion with the Galaxy Watch Active 2.
Like the original Galaxy Watch, the Galaxy Watch 3 has two variants; the 45mm and the 41mm. The 45 mm’s dimensions are 46.5x45x11.1 mm and 42.5x41x11.1mm for the 42 mm variant. The stainless steel version of the 45mm variant weighs 53.8 grams while the titanium version weighs 43 grams. The 42 mm version weighs 48.2 grams.
Like most Samsung products, the Galaxy Watch 3 has a class-leading super AMOLED capacitive touchscreen with 16M colors. The 45 mm version has a screen size of 1.4 inches while the 41 mm version has a screen size of 1.2 inches. Both watches have a screen resolution of 360×360 pixels with 364 PPI density.  Both watches feature Corning Gorilla Glass DX.
The Galaxy Watch 3 features a rotating bezel that makes navigation easier. As for the features, the Galaxy Watch 3 supports eSim, which enables the watch to make text messages and phone calls without needing a physical sim or your smartphone near you. It also supports Samsung Pay, which a lot of outlets are now integrating. It is also MIL-STD-810G compliant, water-resistant up to 50m (IP68), ECG certified.
In terms of the software experience, the Galaxy Watch 3 is using Samsung’s Tizen software. You will be getting the same number of features and apps like Google’s Wear OS, but you will be getting a significantly better software experience. Additionally, you can install apps via Samsung’s smartphone app.
As for the specs, the Galaxy Watch 3 has 8GB internal memory and 1GB RAM. It is powered by Samsung’s Exynos 9110 (10nm), which is a 1.15 GHz Cortex-A53 Dual-core CPU. There is no support for external storage, but the internal storage is large enough to store a decent number of songs.
Overall, the Samsung Galaxy Watch 3 is highly competitive in terms of its design and spec sheet. This is truly Samsung’s best offering and can compete with the likes of the Apple Watch. 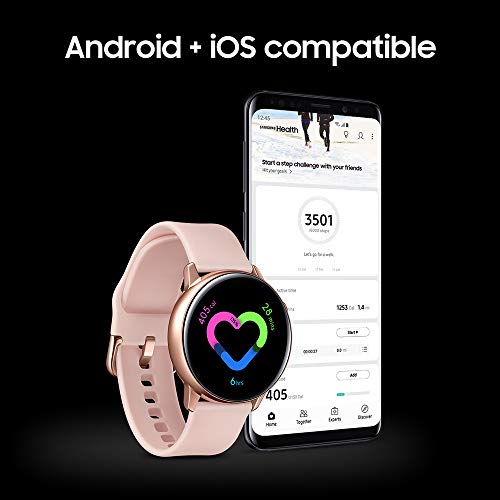 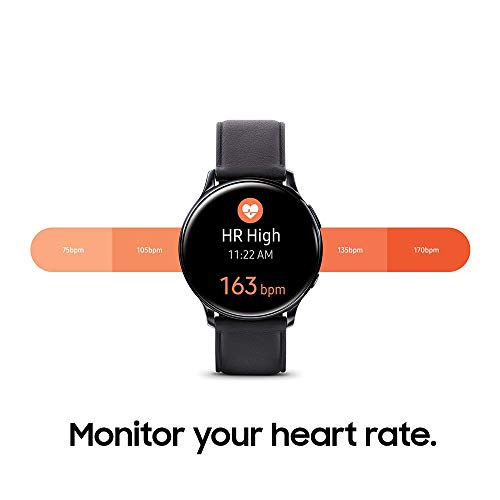 In terms of its battery life, the Galaxy Watch Active 2 can last up to two and a half days of regular use. It is compatible with Qi wireless charging. It may not sound a lot, but that is already plenty, given the number of features that you are getting with the watch.
Overall, if you are looking for a smartwatch with fitness-oriented features as well as flagship-level build and performance, then then you should check out the Samsung Galaxy Watch Active 2.

The Samsung Galaxy Watch is Samsung’s previous-generation flagship smartwatch. It was first released in 2018 but has been replaced by the Galaxy Watch 3 in 2020. It has a lot of the features found on the newer Galaxy Watch 3 and has the same premium design elements that still make it a worthy buy.
The original Galaxy Watch marks the transition in the branding of Samsung’s smartwatches. The previous smartwatches and fitness trackers by Samsung was under the Gear Watch branding. The watches under the new Galaxy Watch branding embodies the same elements that made those watches great and further improved them to be more fit with the current line of Samsung smartphone products.
Like all of Samsung’s smartwatches, The Galaxy Watch has a large and vibrant circular display. It is powered by Samsung’s class-leading panels so expect to have an experience similar to the screens of their smartphones.
In terms of its build quality, the body is mostly made of metal. The materials used have a military-grade certification that can withstand drops up to 9 ft. It can also withstand extreme temperature, dust, shock, and vibration.  The Samsung Galaxy Watch also water-resistant up to 50 meters in salt or freshwater.


Additionally, the Galaxy Watch features a rotating bezel that greatly helps with navigating its Tizen-based OS. It also features a responsive touch screen as well as two physical side buttons.
As for its features, it mostly has the same ones found in the newer Galaxy Watch 3. Some notable features that were not mentioned before. It features a speaker and a microphone for phone calls and for using the voice assistant.  Additionally, the Galaxy Watch can make SOS/emergency calls.
The fitness tracking features are also mostly the same. It can track activities such as distance, steps, sleep, calorie count, calories burned, etc. It can also provide sleep and activity reports as well as an automatic activity tracker. Of course, the Galaxy Watch is packed with sensors to make the results more accurate. This includes GPS, Accelerometer, Barometer, Gyrometer, heart rate, and ambient light sensor.
Some downsides that you will be getting with the older model include the slower processor and possibly fewer software updates. But overall, if you are looking for a lower-priced Galaxy Watch 3 alternative, then the original Samsung Galaxy Watch is still a great choice.

Samsung had a few missteps in recent years. The most notorious one was the Samsung Galaxy Note 7 incident. These phones started exploding and catching fire.
Samsung was forced to recall these units and did not sell the Note 7. It was later repackaged as the Galaxy Note Fan Edition, but it was too late, and the damage was already done.
But apart from this incident, Samsung rarely gets any bad rep. The quality of their smartwatches was never affected by this issue. And ever since that incident, Samsung’s products kept on improving and further cemented their place at the top of the electronics market.

Is Samsung A Good Smartwatch Brand?

Samsung’s products are highly renowned in the tech community. Their smartphones are class-leading and are often considered to be one of the best flagship Android smartphones. Their smartwatches are no different.
In fact, Samsung is no stranger to the smartwatch industry. They have been producing successful models for a long time. Each release aims to topple the industry-standard Apple Watch to become the best in the market.
Despite having a smaller product lineup compared to the like of Garmin and Amazfit, Samsung’s products are all consistent and top-notch. All of their products are assured of having a premium build quality with good good quality control as well as a good software performance. Of course, there are some issues such as failed promises when it comes to software updates, but those do not stop Samsung’s smartwatches from being great wearables.
Samsung is also not only targeting Samsung users. They want their reach to be as wide as possible by making the whole experience accessible whether or not you have a Samsung device. But of course, the best experience will be had inside the Samsung device ecosystem. If you do decide to pick up a Samsung, then you are guaranteed to have an outstanding product.
New entrants in the market such as Amazfit continue to put pressure on Samsung but the Samsung Galaxy 3 is still considered by many to be one of the top watches on the market next to the Apple Watch Series 6.

Where To Buy Samsung Smartwatches?

Samsung smartwatches are available on their Official Website, Amazon, and eBay.

Where Are Samsung Watches Made?

Samsung smartwatches and the majority of its products are manufactured in South Korea.

Samsung provides a 1-year limited warranty for all of its smartwatches.