When buying watches, one of the most common things that most people consider is design. This is what we see on the surface: factors like materials, size, color, band, and fit. While these are good factors to consider, there is another thing that must not be missed when choosing: the movement.

The watch movement is often called the “heart” of a timepiece. Manual watches are timepieces that you need to manually wind. Automatic or “self-winding” movements use the kinetic motion of the wearer to power the watch. Finally, quartz watches use a battery and electronic oscillator regulated by a quartz crystal to keep time.

The movement is the mechanism that powers the watch.  Well-known watch manufacturers produce their own movements and also serve as a third-party company that provides the movements to watch brands. Citizen and  Seiko are examples of Japanese movements, whereas ETA, Sellita, and Ronda are some examples of Swiss watch movements.

For those of you who are just getting started with learning about watches, this article will discuss the basics. We will cover the different types of watch movements and take a closer look at how each of them works.

Each of these movements has its own strengths and possible weaknesses. To know what type is best for you, it’s best that you make a list of the features that you need, and know what maintenance method is most realistic. 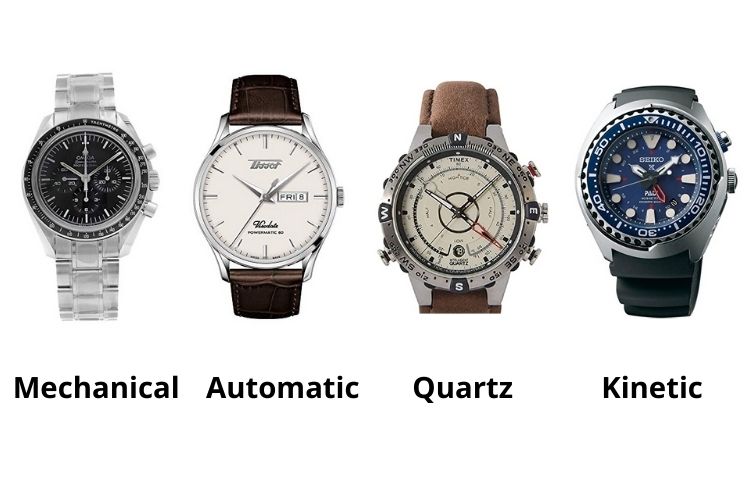 We’ll start with the oldest movement, and has been around for centuries. Manual watches are timepieces that you need to manually adjust in order for them to function. By winding the watch by hand, you are creating energy that makes it function.

This is how all watches functioned back then, and while they’re still around, they’ve been replaced by similar movements that are just as accurate, but more convenient. Many owners who still prefer this movement, however, sometimes have it for romantic reasons. Winding your watch every day in order to ensure accuracy takes discipline and many who do it say that it’s satisfying.

Mechanical watches have two main categories: manual winding or self-winding (which we would discuss below). These watches are composed of hundreds of small parts that work together to track time.

All mechanical watches have a mainspring, a tightly-wound spring that has tension that is increased with the help of different components and gears. The energy stored in the mainspring is released using an escapement, which allows it to have a controlled release of energy (ensuring accuracy). When this energy runs out, the watch stops and needs to be wound again,

A manual watch is wound using the crown daily. After winding, tension is released, and energy is then transferred to components (gear train and escapement), powering the watch. The period that a manual watch can operate without winding differs—it depends on its power reserve (when buying a watch, you will see this in the description). The standard power reserve is 24 and 48 hours, but some models can handle up to more than a week.

A popular example of a manual-winding watch is the Omega Speedmaster Moonwatch, which has 50 hours of power reserve, and the 34mm Timex Marlin has roughly 40 hours.

An automatic movement, on the other hand, does not need to be manually wound. Also referred to as a self-winding movement,  this only needs kinetic energy—the movement of the wrist to activate the watch. The convenience of the mechanism is one of the reasons why this is a popular choice among buyers.

This movement, which also falls under the mechanical category, powers the watch—there is a rotating metal weight called a rotor that’s connected to the mainspring of the watch. As the wearer moves, the rotor is turned and the mainspring is wound, powering the watch.

Some of the most trusted brands that produce watches with automatic movement are Rolex, Tissot, Seiko, and Patek Philippe.

When looking at watch movements, one sub-category that you might encounter is the kinetic watch or an automatic-quartz watch. This is like a cross between an automatic and a quartz watch, which we’ll discuss further below. A kinetic watch has a self-winding or automatic movement but uses a quartz timekeeping mechanism.

An automatic watch uses the rotor to convert the wearer’s wrist into energy—a kinetic watch works this way too, but instead, the movement converted into energy is transferred to a quartz crystal and then stored in a self-charging battery, allowing the watch to have a longer battery life than the conventional quartz watch.

The Kinetic watch was introduced by Seiko in 1986. The company defines this movement as having an “internal electrical generator operated by the kinetic movement of the user’s wrist.”

The Seiko SRN047P1 and the Seiko Seiko SUN065 Padi Kinetic GMT Diver are some of the best kinetic watches available.

The first commercial quartz watch was introduced in 1969 when Japanese watchmaker Seiko released the Astron 35SQ (a quartz clock came much earlier, in 1927, when it was created by Warren Marrison and J. W. Horton at Bell Laboratories). This type of watch has the simplest movement, as it used a battery and a quartz crystal that makes it tick. It’s also accurate (sometimes even more accurate than a fancy mechanical watch) and the most affordable.

Seiko’s 1969 release of the quartz wristwatch changed the watchmaking industry. This is the period of the Quartz Crisis/Quartz Revolution (depends on how you look at it). This period shook the Swiss watchmaking industry, affecting the country’s economy. For more than a decade, Swiss watch industry jobs were lost, and the country was no longer the leader in watchmaking (prior to this, around 95% of mechanical watches sold all over the world were from Switzerland).

One of the things that people love about quartz watches, aside from their affordability, is their consistency and accuracy. They only lose only a few seconds a month and have a life span of around one to two years or more. A watch with a quartz movement has fewer parts than mechanical watches and does not need to be maintained that often.

Because this type of watch has simple parts and functions, it has room for add-ons. The simplicity of the features allows quartz watchmakers to concentrate on other things, like adding alarms, altimeters, and compasses. One example is a hybrid smartwatch, a combination of a quartz timepiece with digital features—it’s an analog watch with a quartz movement, and add-on features like an activity tracker, heart rate monitor, step counter, and other health features.

Read more about the accuracy of quartz watches here.

In general, most watches with a quartz movement are accurate to about a month, which is better than most mechanical watches.  Newer, High Accuracy Quartz (HAQ) watches such as the Citizen CTQ57-0953 Chronomaster have essentially the same functions as the regular quartz but have an added bonus: they are “thermo-compensated”, this allows the watch to adjust to the changes in temperature (a threat to the accuracy of a quartz movement), allowing it to have an accuracy rate of 10 seconds per year or better.