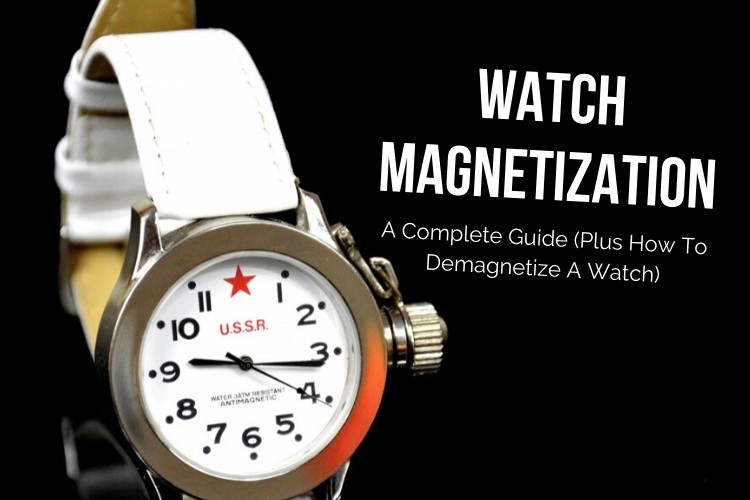 Ever notice that your watch seems like it’s running faster than it should? You are most probably not imagining things, as watches have a tendency to do so when they’re magnetized. Some watch brands issue warnings or watch care tips to avoid letting your watch come into contact with gadgets or appliances that can produce strong magnetic fields such as MRIs and mobile phones.

Watch magnetization can affect quartz watches also but is primarily a problem for mechanical and automatic watches. It is becoming more common with the increased use of cell phones, speakers, or strong magnets. If your watch is exposed to magnetic fields it can cause the internal parts of the watch (including the hairspring and balance wheel) to stick together and cause the watch to lose time. If you find that your watch is magnetized, you can use a special demagnetizing device or follow the other steps explained below.

This guide will tell you all about watch magnetization—how and why it happens, how to know if your watch is magnetized. We’ll also provide simple ways that can help you de-magnetize your watch by using devices available online, as well as some tried and tested DIY methods.

How does a watch get magnetized?

Magnetization takes place when a watch comes in contact with magnetic fields, like those found in electronic devices such as computers, mobile phones, speakers, and microwaves. If you’re exposed to these frequently (some of the professions that could be at more risk include medical staff who are always near x-ray machines and scanners or electricians), your watch could be affected in terms of accuracy.

How Does Magnetism Affect a Watch?

When a watch is exposed to an appliance or gadget with a strong magnetic field, it has a tendency to run fast. For example, your watch can pick up a charge and run faster if it’s regularly placed next to a TV or a stereo.

There are many tiny magnetic steel components working inside of the watch (such as the hairspring or the balance wheel), and when they come in contact with a magnetic field, these parts can stick together and affect the spring, making the watch speed up (or in some cases, slow them down).

If your watch is magnetized, it is best that you immediately demagnetize it to prevent further damage and resume its normal function.

How to Check if a Watch Is Magnetized?

If you notice a change in the speed of your watch, the best thing to do is consult a watchmaker (more on this later). You can also do it DIY-style. Below, we’ll provide some methods on how you can de-magnetize your watch.

This is one of the easiest ways to check watch magnetization, and all you need is a smartphone. Available for both Android and iOs smartphones, the Lepsi Watch Scope device measures and assesses the performance of mechanical watches. According to its official website, it can measure rate variation, amplitude, and beat error in just a few seconds, and “with exceptional accuracy.” It also boasts that it is “the smallest chronocomparator ever made.”

The device has had many excellent reviews by experts, such as this one by Fratello Magazine, which took the Lepsi watch analyzer for a test. One notable thing about the watch is that it’s 100% made in Switzerland, where some of the world’s best watches come from.

Some of the things promised by Lepsi include a high measurement accuracy as well as a multiposition technology, where the device can measure the watch even if you’re wearing it. Having this device can also allow you to monitor your entire watch collection, allowing you to easily find out if any need to be serviced.

The Lepsi Watch Scope costs around $250 USD. The brand also makes the Lepsi Watch Analyzer, which has more features and costs way more (around $900).

This is another app that helps watch owners maintain a healthy timepiece. The Toolwatch app, which is also available in both Android and iOs, provides an easy way to measure the accuracy of mechanical watches.

Developed in Switzerland, the app was created by a team of three watch aficionados, so you know you’re in good hands. Toolwatch also boasts of using “the most accurate atomic clock on earth” to synchronize watches—the U.S. Naval Observatory’s atomic clocks cluster. The group explains its processes on its website.

Check out this article to learn more about Toolwatch as well as reasons why it’s important to regularly measure the accuracy of your watches.

You can learn more about the app here.

You can also check watch magnetization using a compass. The simple process on how to do this: placing the compass on a flat and stable surface and then place the watch above it. If you see that the watch moves the compass needle, it is magnetized.

How to Demagnetize A Watch? (3 Easy Ways Explained)

Once you’ve confirmed that your watch is, indeed, magnetized, you can start with the de-magnetization. Here are a number of ways on how you can demagnetize a watch, from using professional tools to applying DIY tricks.

Using a watch demagnetizer is one of the easiest ways to demagnetize a watch. This one’s a device that can accurately determine if your watch is magnetized, as well as remove unnecessary magnetism in your watch.

A watch demagnetizer can easily be ordered online (such as this one from Amazon)  These devices are compact and relatively easy to use, they can also demagnetize tools.

To use a watch demagnetizer, you need to hold the red button down (while your watch is placed on top of the device’s surface) for roughly 10 seconds.

You can also use an old TV in demagnetizing a watch. According to this article, an old CRT television monitor (a computer monitor works as well) could solve the problem, as these have a degauss function used to remove the electrons that cause distorted images on the TV screen.

All you need to do is hold up the magnetized watch on the screen, and this will remove magnetization. According to this article, you can also go to the menu, look for the degauss function, and then select.

This could be the easiest way to make sure that your watch is properly demagnetized, especially if you’re not sure how to use the demagnetization device. If you have access to a watchmaker or a watch repair expert, it’s best if you have them analyze your watch.

One of the reasons why this is advisable is they will be able to assess properly what needs to be done to the watch. Some watch owners sometimes start demagnetizing the watch and later find out that magnetization wasn’t the problem, leading to more problems.

One of the possible downsides of hiring a watchmaker is overcharging. Many watch owners have expressed in online discussions that the repair takes seconds, but some watchmakers charge way higher than they should. It’s best to have the watch demagnetizer’s price tag as a basis (some even say that they’ve gotten this service for free—it really depends on your relationship with your watchmaker). In any case, it should not be expensive.

Watch magnetization is frequently discussed in many online forums. By simply checking these discussions, you will get different suggestions from watch owners on how you can do it DIY-style.

This forum, for example, suggested a number of methods such as rotating a magnet, using a soldering gun, using heavy linen thread, and so on. This Watchuseek discussion, on the other hand, talks about watch demagnetizers. Gearpatrol explains how to use an old TV to demagnetize a watch.

Over the years many watch companies have developed methods and technologies that reduce magnetization in watches. These innovations allow the watches to withstand strong magnetic fields. One of the earliest recorded antimagnetic technologies was developed by watchmakers at Vacheron Constantin, who created an anti-magnetic pocket watch in 1915; and Swiss brand Tissot, which introduced the Tissot Antimagnetique watch.

You can check out this Watch Time article which gives a brief history of the efforts and innovations that watch companies have done in order to lessen or get rid of magnetization.

Most brands also have on their websites information on what could cause magnetization. This Customer Service page by Seiko, for instance, discusses how magnetism may affect a watch, and advises their customers to not leave their watches close to magnetic objects for long periods. It also mentions that authorized Seiko service centers have demagnetization services.