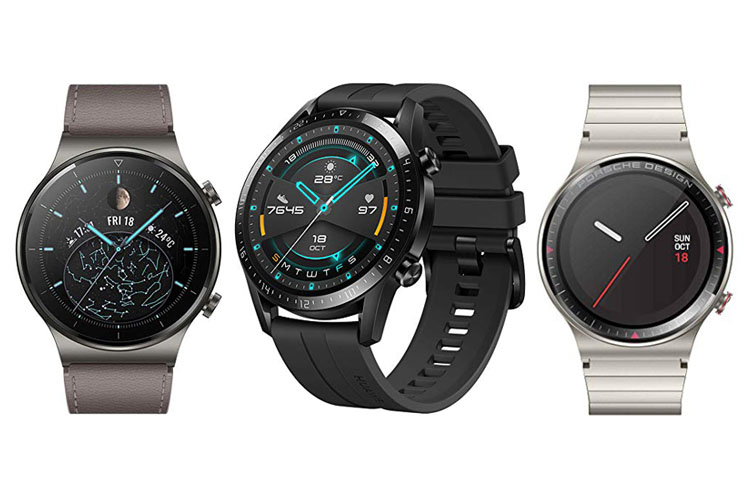 Despite Huawei’s recent struggle in the US market, Huawei is still one of the best performers and most successful tech giants in recent years. Everything from their smartphones, smart home devices, and smart wearables have been well received by the public.
Their smartwatches, in particular, have quickly risen in popularity ever since they made the move from Wear OS to their own dedicated platform.
The Huawei Watch GT 2 and GT 2 that we reviewed managed to impress us and serve as the watches to beat in their respective price points.
But those two aren’t the only exceptional smartwatches in Huawei’s lineup. Huawei has been on a roll with releases of new models at every price point. In this article, we will be going over Huawei’s best smartwatch offerings.
We will be tackling everything from their flagship Huawei Watch GT 2 Pro up to their budget fitness-focused Huawei Fit so keep on scrolling to learn more.

Huawei’s best offering is their flagship smartwatch, the Huawei Watch GT 2 Pro.
This model is the successor to the highly successful Huawei Watch GT 2. It builds upon the GT 2’s impressive speech sheet and software performance and adds new features that make it worthy of its “Pro” moniker.
The GT 2 Pro is the best-built model in Huawei’s smartwatch lineup. It is utilizing more premium materials such as titanium for its body and sapphire to protect its 1.3 inch AMOLED display.
Its internal components are also as advanced as its aesthetics. The GT 2 Pro now utilizes TruSeen 4.0, which is capable of producing more accurate results than previous models.
Familiar elements such as the fast and reliable UI make their return but with some tweaks that are exclusive to this model. The most notable one being the ability to install apps which expands the GT 2 Pro’s functionality.
The GT 2 Pro also features the great workout selection found on the fitness-focused GT 2e. Additionally, the GT 2 Pro has a built-in GPS with a route back feature to help you return to your point of origin.
Just like its predecessors, the GT 2 Pro has a fully customizable notification system. It also has a built-in mic and speaker for calls and potentially for the upcoming Celia voice assistant. If you are looking for Huawei’s best offering, the GT 2 Pro is your best bet.

If you are willing to give up some of the GT 2 Pro’s “Pro Features,” the second-best smartwatch in Huawei’s lineup is the Huawei GT Watch 2. This watch was the first to use the Kirin AI processor and set the bar for all Huawei smartwatches to follow. The main highlights of this watch are its beautiful aesthetics, vast feature set, and amazing battery life.
The Watch GT 2 has a gorgeous design with a curved display. On the outside, it looks very similar to high-end analog wristwatches. And on the inside, it carries the latest tech that Huawei has to offer.
This watch is powered by the Hisilicon Kirin A1 processor that is also seen on other current generation Huawei products such as the Huawei Freebuds 3. This efficient processor allows the watch to have a lightweight and efficient operating system as well as a 2-week battery life.
Unfortunately, the Watch GT 2 cannot install applications like the Watch GT 2 Pro. This may limit its functionality. However, the Huawei Watch GT 2 arguably has everything that you would need with a smartwatch.
If you do not need the GT 2 Pro’s “Pro” features and just want a stylish but solid and feature-packed smartwatch with long battery life, the GT 2 is a worthy alternative. Make sure to read our full review of the GT2 to learn more.

All of Huawei’s smartwatches are gorgeous looking and will satisfy anyone looking for a watch with good aesthetics. But if you are looking to take your smartwatch game to the next level, the Porsche Design Huawei Watch GT 2 is like no other.
Huawei has collaborated with Porsche in the past to make an ultra-premium version of their flagship smartphones. However, this is the first time that the two brands will be collaborating with a smartwatch.
The Porsche Design Watch GT 2 is based on the Huawei Watch GT 2. However, most of its specs have been revamped to match its significantly higher price point. The watch case is made of pure titanium, giving it a more solid and sturdy feel compared to the GT 2’s aluminum case.
And just like the GT 2 Pro, the screen is protected with sapphire crystal which is more durable than glass. However, one unique feature of this watch is that its strap is also made of titanium. Additionally, the strap has a quick-change mechanism that makes removing and replacing the strap a lot easier.
The Porsche branding can be seen on the top of the smartwatch. It doesn’t try to steal the show and maintains the classy and minimalistic look of the watch.
The internals of the watch has also received an overhaul. The Porsche Design Watch GT 2 is equipped with Huawei’s latest TrueSeen 4.0 heartrate sensor, which produces more accurate results than the original Watch GT 2.
Additionally, there are watch faces that are exclusive to this smartwatch. All of the icons have also been redesigned to fit the Porsche Design aesthetic of the watch.
The rest of the watch is pretty similar to the Watch GT 2. It is powered by the Kirin A1 chip and features a fast and clean software experience. If you enjoy the reliability and feature set of the Watch GT 2 but want an even more premium experience, then don’t skimp on the Porsche Design Watch GT 2.

If you like the design and feature set of the Huawei Watch GT 2 but find its watch case too big for your wrist, the Watch GT 2 is also available in a 42 mm version. This smaller and more lightweight version manages to pack most of the essential features of the larger Watch GT 2 in a more affordable package.
Aside from its smaller size, the weight has been significantly reduced on this model. It only weighs 29 grams, almost half of the GT 2 44m version’s weight. This ensures that the watch will be comfortable to wear throughout the day regardless of what activity you are doing.
The 42 mm version of the Watch GT 2 has the same internal specs as its bigger brother. It is powered by the Kirin A1 chip and is utilizing Light OS. All the various workout and other software features are also found here.
There are, however, some differences to take note of. The AMOLED display is slightly smaller at 1.2 inches instead of 1.3. The 42 mm version also lacks a microphone, making it similar to the Huawei Watch GT 2e.
The most significant change is the battery life. The 42mm version only lasts up to seven days. While this isn’t bad, it is way below the GT 2 and GT2e’s 14-day battery life. But overall, if you are looking for a smaller smartwatch that has the same feature set and gorgeous aesthetics as the GT 2, the 42mm GT 2 is worth a look.

The Huawei Watch GT 2e serves as Huawei’s mid-range model and fitness smartwatch. It may have a lower price point, but it still embodies everything that was well-loved with the Watch GT 2.
The GT Watch 2e and the GT Watch 2 are very similar in terms of their specs. They both have the same Kirin A1 processor, the same two-week battery life, the same Bluetooth 5.1 connectivity, etc.
What separates these two models is the design. Both are high-quality and premium feeling smartwatches, but the GT 2e has a simpler look that is reminiscent of the classic digital watches. This allows the GT Watch 2e to be more lightweight and better suited for workouts.
Both the buttons and the wristband have also been redesigned. The large buttons and strap locks often on the GT 2e bumped into the wrist when doing exercises. This is why the buttons are smaller, and the strap locks no longer allow the GT 2e to be laid flat.
The wristband is also different and is more optimized for sports. The holes in the wristband allow for better airflow. The buttons have also been changed in order to bump less with your wrist during heavy workout sessions.
There are some trade-offs with the GT 2e. There is no longer a speaker and microphone, and the RAM is reduced. But overall, if you are looking for a more budget-friendly and sports-optimized version of the GT 2, then this watch is a great choice. Make sure to check out our full review to learn more.

Regardless of which model you choose, all of Huawei’s smartwatches are champions when it comes to battery life. The Huawei Watch GT 2, GT 2e, and GT 2 Pro can all last up to two weeks even when using most of their features. Of course, features such as GPS and always-on display (AOD) may potentially reduce the battery life to one week.
But even then, one to two weeks of battery life easily beats the one/two-day battery life of competing smartwatches such as the Apple Watch and Wear OS watches.

If you are looking for an even more affordable Huawei smartwatch, the Huawei Watch Fit is by far the most affordable and feature-packed option on this list. This watch aims to bridge the gap between their fitness trackers and smartwatches. It encompasses the lightweight and boxy design of products such as the Huawei Band 4e with the feature set of smartwatches such as the Huawei Watch GT 2 and GT 2e.
The most notable change for the Huawei Watch Fit is the new rectangular AMOLED display. This new design gives more real estate compared to Huawei’s traditional watches. Its 70% screen to body ratio gives enough room for more advanced graphics such as the new personal training assistant feature with on-screen instructions.
Given its more affordable price tag, some feature cuts are expected. Unlike Huawei’s other smartwatches, the Huawei Watch Fit cannot be paired to Bluetooth earbuds for music listening. Answering phone calls through the watch is also not possible.
The Watch Fit also features fewer sensors than the Watch GT 2e. While the heart rate sensor has been upgraded to TruSense 4, the rest of the sensors aren’t up to par with the higher-end watches.
The battery life is also a bit shorter as it can only last anywhere from seven to ten days, depending on the features you are using. It does have a fast charging feature meaning the battery life shouldn’t be an issue.
If you are looking for a fitness-focused watch with a unique design and a budget price point, the Huawei Watch Fit is a worthy alternative to the likes of the Huawei Watch GT 2e.

Huawei is no stranger to the smartwatch market. They have made successful smartwatches in the past, such as the original Huawei Watch and Huawei Watch GT. However, the success of their watches has largely been overshadowed by the success of their smartphones.
Their wearables have been mostly a side project in the past. However, in recent years, they have been consistently revamping their lineup and are proving to be a fierce competitor in the smartwatch market. This is evident with the successful release of the Watch GT Series.
Huawei has most notably moved away from Google’s Wear OS platform and has developed its proprietary operating system called the Huawei Light OS. Their current lineup is simple and is easy to follow. It consists of the flagship Watch GT 2,  the midrange Watch GT 2, and the original Watch GT (which may be discontinued in the future).
You can learn more about Huawei’s history and product lineup in our Huawei Brand review.