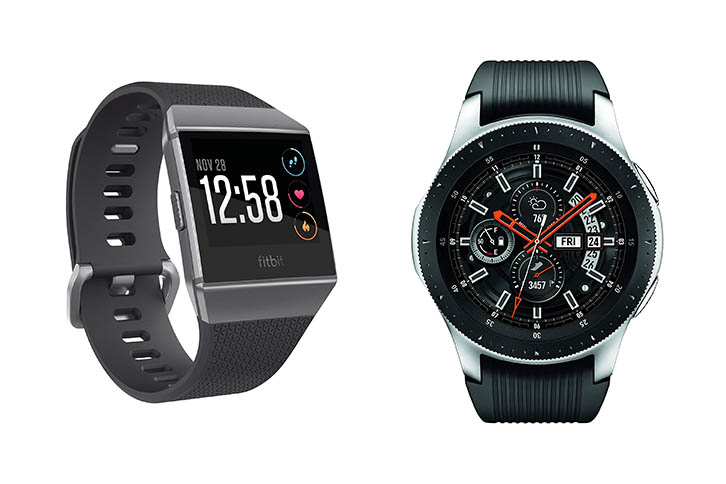 Fitbit and Samsung are both well renowned in the world of smartwatches. Fitbit has been producing smartwatches since 2013 and has been one of the innovators of the health tracking features of smartwatches. Samsung, on the other hand, are also veterans.
They have produced the Samsung Gear Watch Series and, more recently, the Samsung Galaxy Watch series to accompany their well-known and successful Galaxy and Note smartphones. Their watches have also been a steady competitor to the highly acclaimed Apple Watch.
In this article, we will be comparing two of these companies’ older models, the Fitbit Ionic and Samsung Galaxy Watch. This comparison aims to help consumers decide which one of these sub 200 USD smartwatches will fit their use case.
Both are excellent and options. However, the better one will largely depend on the consumer’s needs. We will be comparing both smartwatches in terms of their design, features, battery life, and other essential categories. And at the end, we will be crowing a winner. keep on scrolling to find out more.

Fitbit is an American fitness and health brand founded in 2007. With its innovative health-focused products, Fitbit spearheaded its way to the top of the wearable competition.
Fitbit’s smartwatches offer similar features to high-end alternatives such as the Apple Watch and the various Wear OS watches. But one edge that they have over their competitors is their background in health and fitness. With their watches, they can bring innovative ideas that help improve the lives of their users.

Samsung is a tech giant that hails from South Korea. It was founded in 1938, making them an older company than Apple, which was only founded in 1976. They were initially a grocery trading store before they started getting into the tech industry.
Today, Samsung is one of the leaders in the tech industry. The Galaxy S and Galaxy Note Series, are some of the most renowned enthusiast smartphones in the market
Just like Apple, Samsung is a veteran in the smartwatch industry. While their Samsung Gear Watches weren’t as popular as the Apple Watches, they still held their ground.
But in February 2019, Samsung rebranded the Gear series into the Samsung Galaxy Watch Series. The new Galaxy Watch Series features better software, better build, and better features, making it one of the best competitors to the Apple Watch.


The Fitbit Ionic is Fitbit’s entry into the fitness smartwatch market. It also serves as the follow-up to the Fitbit Blaze. Its fitness focus is evident with its real-time guidance feature, which is effective for setting workout goals.
In terms of aesthetics, the Ionic is going for a futuristic look inspired by space exploration vehicles; it has a square display with sharp edges. It may look out of place and may not fit everyone’s tastes, considering the minimalist options available in the market.
One design element that Fitbit has done with the ionic is the use of both plastic and metal in its casing. This allows more accuracy in its sensors and antennas while maintaining its solid build quality. The Ionic’s strap is made of a flexible and durable elastomer material.

The Samsung Galaxy Watch, on the other hand, serves as a refresh to Samsung’s Gear Watch lineup. Compared to the Ionic, it has a cleaner and more modern look. It takes inspiration from the classic analog watch design, but it adds its own flair to make the watch ready for the modern consumer.
The Galaxy Watch features a large round display and an all-metal build. Additionally, the Samsung Galaxy Watch has a rotating bezel, which isn’t very common for most modern smartwatches.

The Ionic has the following dimensions: 38.59mm Width x 12.2mm thick. It weighs 30 grams.
The Samsung Galaxy Watch, on the other hand, has a case dimension of 46x49x13 mm and weighs 63 grams. It is heavier compared to the Fitbit Ionic.
Both watches should be comfortable to wear and should not cause any discomfort throughout the day, given their weight and size.


The Ionic has a 1.42-inch display with a 348 x 250-pixel screen resolution and a pixel density of 306 PPI. The Galaxy Watch, on the other hand, has a 1.3-inch Super AMOLED Display with a screen resolution of 360 x360 pixels and 424 PPI pixel density.
The Ionic’s LCD screen isn’t bad given its age. It is still capable of displaying a clear and sharp image. However, the Ionic falls flat when compared to the Galaxy Watch’s industry-leading AMOLED display.
Additionally, the Galaxy Watch has a higher screen resolution and pixel density than the Ionic’s display. The use of a Super AMOLED display also produces more vibrant colors that easily pop.
Both watches feature an always-on display (AOD). But of course, the Galaxy Watch’s Super AMOLED display handles AOD much better.
Both watches have a branded damage-resistant glass. The Ionic’s screen is protected with  Corning Gorilla Glass v3, while the Galaxy Watch is protected with Corning Gorilla Glass DX+. These branded damage-resistant glass used in these watches is thin, lightweight, and can withstand high levels of force.

The Samsung Galaxy Watch has a military-grade certification that can withstand drops up to nine feet and can withstand extreme temperature, dust, shock, and vibration. The Fitbit Ionic, on the other hand, features a metal and plastic build. Despite theoretically having an inferior build, Fitbit is well known for producing durable watches.
Both watches are dust-proof and water-resistant up to 5ATM. They are also sweat-resistant and can reliably be used for sports and other outdoor activities.
Additionally, both models’ straps are replaceable in case you want a different style or different material. On the flip side, the Ionic is bigger and bulkier, so keep that in mind if the size is a concern.
Overall, both smartwatches are well built using high-quality watch case materials. However, the Galaxy Watch is superior both in terms of feel and with the materials used.


Both watches are feature-packed and offer most of the basic features that most smartwatches have. Here are some highlights for each watch.
Both of these watches give various alerts and notifications. You can also interact with these notifications in different ways. Incoming phone calls, for example, can be muted or rejected by the user. They also have a stopwatch, alarm, activity alert, and other general watch features.
Additionally, both watches have Bluetooth audio support, exercise tracking, Fitbit Coach (for the Ionic), and several other features. These watches have built-in GPS and a feature that can locate your phone.
In terms of health tracking features, they can also integrate with social networks, which allows you to share information with popular social networks.  You are awarded achievements for reaching goals to encourage you and keep you motivated. The Fitbit app on the Ionic allows you to compete with friends using the same app, which makes it more enjoyable.

The Fitbit Ionic also has a barcode scanner on the app.  The app supports scanning food barcodes using the camera. It checks a food database and adds the item based on its barcode, allowing you to quickly and easily track your calorie intake.
There’s onboard storage for music on both devices, and they can also connect to Bluetooth Headphones/Earbuds with support for Bluetooth 4.0. You can transfer your own music files to the watch or subscribe to Deezer or Pandora for Ionic and Spotify on Samsung Galaxy Watch to save music offline. The Spotify app can now support Spotify’s control on your wrist.
Some notable features that are only available on the Samsung Galaxy Watch are answering calls (because of the absence of a microphone and speaker on the Ionic), a radio, voice commands, a smart alarm, a built-in camera remote control function, and an external memory slot.

Both watches have smart notifications that can receive emails, text, calls, weather forecasts, calendar reminders, and more. However, the Galaxy Watch implementations are noticeably better due to its more refined software.
Both watches can respond to text messages using Android devices. However, the Samsung Galaxy Watch 4G allows users to use a 4G connection without needing a smartphone nearby. Users can leave their phones at home and still stream music, take calls or messages, or get notifications while out through the Samsung Galaxy Watch.

The Galaxy Watch has a built-in speaker and microphone, which can be used to give voice commands through BIXBY. It also has a built-in camera remote control function. The Ionic, on the other hand, does not have this feature.


On the fitness side, both watches can track activities like distance, steps, and sleep. Some of the available activities in multi-sport mode include cycling, running, and swimming; a heart rate monitor is also available on both watches.  Reports of the daily activities are provided.
The Galaxy Watch measures pace and calorie count. It can automatically detect or track activities such as elevation and even track water intake. The Ionic also detects activities automatically, such as elevation.
On the other hand, the Fitbit Ionic device features an accelerometer to track steps and movement and a heart rate monitor on the rear to keep tabs on your heart. There’s also the relative SpO2 sensor to track blood oxygen. Fitbit has made improvements to the way that data captured is presented.
Both watches feature fitness achievements. This is similar to video games, where you are given achievement badges for reaching your health goals. Additionally, this feature has a social aspect where it allows you to share achievements and compete with your friends’ high scores. This is a great feature to have since competing watches don’t usually tackle health and fitness using this kind of approach.
Additionally, both smartwatches have features designed for women. These include exercises tailored specifically for women. There is also a menstrual cycle monitoring feature that allows the watches to give notifications and alerts to the user when the specified/predicted date is near.
These watches are also packed with sensors like GPS, Accelerometer, Barometer, Gyrometer, heart rate sensors, and ambient light sensors. The GPS  helps to detect outdoor workouts if you want to track route and distance.

Both watches are compatible with Android and iOS devices via Bluetooth. The Fitbit can also connect to devices running Windows.
Both watches sync wirelessly and automatically.  Both watches lack cellular ANT+. However,  the Samsung Galaxy Watch has a cellular module.  Devices that use cellular technology can connect to mobile networks. Cellular networks have much wider signal coverage than Wi-Fi.  The Ionic does not have this feature.
Both watches support Wi-Fi connectivity, which allows the installation of more applications such as music streaming services. Additionally, Ionic and Galaxy Watch have NFC, allowing the devices to perform simple wireless transactions.

The Fitbit Ionic has a battery life of up to 4 days on regular use and up to10 hours on GPS mode. The Galaxy Watch, on the other hand, can last up to seven days on the 46mm model and up to 4 days on the 42mm model based on light usage.
Both watches aren’t stellar, especially when compared to the battery life of watches such as the Huawei Watch GT 2 (which we have also reviewed here). However, the Galaxy Watch’s battery life is already very good especially given its features. 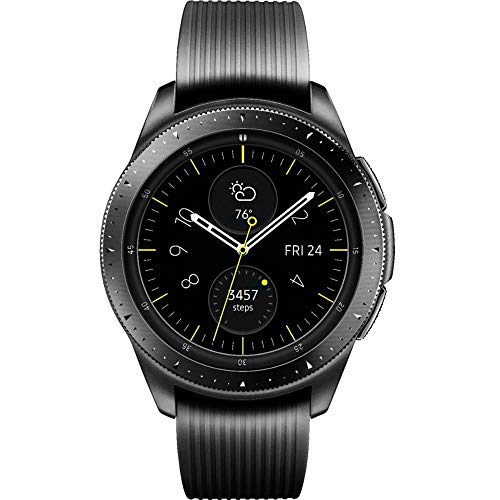 The overall winner is, without a doubt, the Samsung Galaxy Watch. It is better in almost every category, from the software experience to the screen quality. While the Ionic isn’t a bad smartwatch, we highly recommend going for the Galaxy Watch, especially if you want to have the best smartwatch experience.