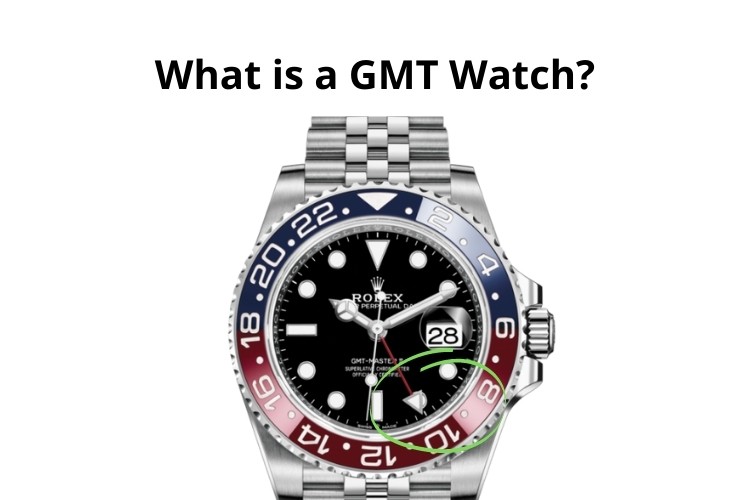 Even as technology advances smartwatches provide quick ways to track multiple time zones some people claim that wristwatches are becoming obsolete, however, traditional timekeeping accessories remain stubbornly popular.
In large part, that’s because wristwatches are so versatile and adaptable. New features and functionalities ensure that watches still serve a purpose for millions of people.
One type of watch that is favored by pilots, businesspeople, and frequent travelers is the GMT watch.  It’s not a new type of watch – GMT watches have been around for generations – but they serve such an essential need that they have never gone out of fashion.
So, what are GMT watches, and are they easy to use?

What Does GMT mean?

First things first: GMT stands for Greenwich Mean Time.
For centuries, as the known world expanded, governments and scientific bodies were attempting to unite around a base global time. Up until recent human history, time zones were different around the world, and even within the same country, you couldn’t count on a consistent time from town to town.
With the scientifically prominent Royal Observatory set inside Greenwich, a park in London, England, it became common to use that specific location as the prime meridian for time measurements. In 1884, GMT was officially adopted as the international time standard.  At that time, the International Meridian Conference established 24 time zones around GMT.
Like so many historical artifacts of science, GMT is Western-centric, but it nonetheless was adopted globally. In modern times, with the greater accuracy that atomic clocks allow, GMT has been replaced by Universal Time Coordinated (UTC; also known as atomic time). However, the prime meridian that was established through Greenwich for GMT remains the base of UTC, so GMT is still a reliable timescale.

What Are GMT watches?

What distinguishes a GMT watch is its extra hand. Most analog watches have three hands: hour, minute, and second. The fourth hand on a GMT watch rotates separately from those other hands, rotating once around the face every 24 hours.
In addition to the extra hand, the other important facet of a GMT watch is the rotating bezel. The bezel is the ring that surrounds the crystal of the watch face. All watches have bezels, but not all of them rotate. In the case of a GMT watch, the bezel rotates so that you can set it to different time zones.

How do you read a GMT watch?

Now that you know about the extra hand and the rotating bezel, we’ll give you a brief primer on how to use a GMT watch. The first thing you need to know is that using GMT (or UTC) requires basic arithmetic (breath easy, we really mean basic).

With Greenwich representing the zero hour, knowing the time in any given time zone requires adding or subtracting the number of hours that time zone is removed from London (assuming it isn’t during Daylight Savings Time; Iceland is always on GMT). If it is noon in England and you want to know the time in New York City, just subtract five – the number of time zones-New York is behind London.
A GMT watch does this basic math for you. Wherever you are, you rotate the bezel so that the fourth hand shows the same time as the hour hand (if it’s 2 p.m., the fourth hand will be pointing to 14). Then, to know the hour in another time zone, you rotate as many clicks as is necessary. For instance, if you are in New York City and want to know the time in Los Angeles, turn the bezel three clicks (the number of time zones separating the cities) and voila!
Sure, it might seem like it would be easy to do the math in your head, but for frequent travelers who are constantly changing time zones, it’s nice to have a reliable tool to keep track. Who wants to do math when they’re jetlagged?

Who needs a GMT watch?

As we just said, people who change time zones often will find GMT watches especially helpful. Pilots and flight attendants are in this category, as are frequent fliers like business and salespeople who are constantly on the road.
Similarly, even for people who don’t travel much, if your job requires interacting with people around the world, a GMT watch can be helpful. The last thing you want to do is accidentally call a client in Hong Kong while they’re asleep because you lost track of the time differences.
With most people owning mobile phones, GMT watches are not strictly necessary. That could be said of wristwatches in general, though, and yet people still love them. The appeal of a GMT watch is both in its functionality and in the style and design.

What is a good GMT watch?


One of the most well-respected is the  Rolex GMT-Master (and the newer GMT-Master II ) is still one of the most easily recognizable watches on the planet. In spite of its high price tag, this watch is still in high demand by enthusiasts and globe trotters, the iconic timepiece truly embodies the essence of a modern watch. But, don’t let the Rolex pricing keep you away from this style of watch. A number of brands have models that are similar to the GMT-Master that are great affordable alternatives.
Apart from the iconic look of the Rolex, there are many other options on the market that have the GMT functionality, here are just a few.


For those who like something simple but elegant, the stainless-steel Victorinox FieldForce GMT is a good match. With Swizz-Quartz movement and a rotating bezel, you can reliably know the exact time around the world with a simple twist of your wrist.

The Hamilton Jazzmaster GMT watch is one of the more uniquely designed GMT watches on the market. With the names of major world cities printed on its black-and-white rotating bezel and a brown leather strap, this Swiss-Made watch exudes effortless cool.


Japanese watchmaker Seiko makes numerous GMT watches, like the Seiko Men’s Watch (SUN057) With a nylon and leather strap and stainless steel case, this sporty looking watch also includes a compass and calendar. And being a Kinetic watch you won’t have to worry about it losing battery power as long as you wear it on a regular basis.
There are countless GMT wristwatches available, so no matter your style or your favorite travel destination, there is a timepiece built to be your perfect companion.