Known as “The Toughest Watch on the Planet,” the G-Shock watch line from Casio certainly earns that distinction. Not just a hollow marketing claim, the G-Shock is designed for the harshest environments on the planet. If ever you see an athlete or thrill-seeker within their element wearing a watch, it is more than likely a G-Shock model. G-Shock also made its mark both in the military and law enforcement industry. In this article, we will look at the illustrious and exciting history of the G-Shock watch. 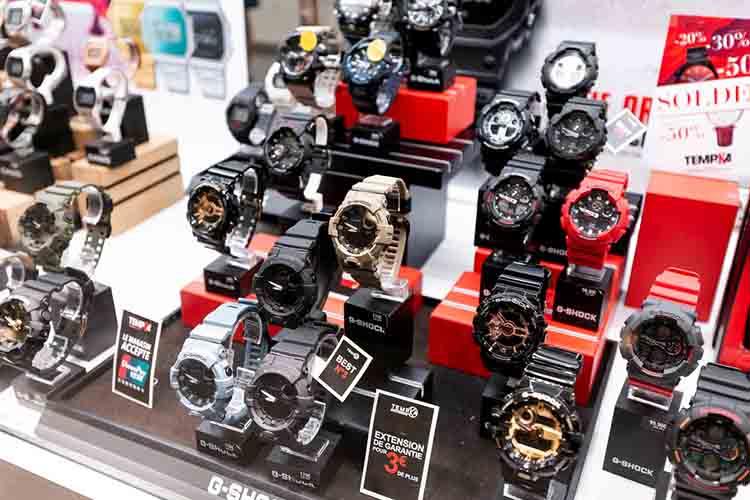 To properly introduce what G-Shock is all about, it is best to start from the beginning and go through all the relevant milestones from there. So, let’s begin.

G-Shock first came into the picture when Casio’s head of watch design, Kikuo Ibe, formed a small team called “Team Tough.” The team started development with this idea of a genuinely tough-as-hell in 1981.
The core idea of the G-Shock was the “Triple 10” design criteria; Ibe and his team wanted to create a watch with s 10-ATM water resistance, battery life of up to 10 years and could withstand the impact from a 10-meter drop.
However, the path to achieving their goal design was long and arduous. The team went through over 200 prototypes before perfecting the design. It wasn’t until Ibe saw a bouncing rubber ball in the local park that he got the idea for the G-Shock’s signature build.
Ibe concluded that the center of the ball doesn’t suffer from any shocks as the exterior absorbs all the impact. Hence, they based their design on this specific notion for the G-Shock model’s casing. This is why it is relatively light despite the rather large size of G-Shock watches. This is because G-Shock watches are hollow, with the primary timekeeping mechanism encased within a soft gel cushion.
With these three main goals in mind, Team Tough began developing the very first G-Shock. It took two years to complete and release the first model, the G-Shock DW-5000C.


After two years in development and hundreds of redesigns and reiterations, Ibe and his team finally unveiled the first of many G-Shock models to come – the G-Shock DW-5000C. Launched in April 1983, the DW-5000C came in two variations: the DW-5000C-1A (black and red) and the DW-5000C01B (black and gold).
Of course, the G-Shock watch line won’t garner such a reputation for being just tough. The DW-5000C also featured several integral timekeeping functionalities that helped separate itself from the typical wristwatch. The original G-Shock incorporated a countdown timer, stopwatch, alarm, 12/24-hour mode, and a backlight. These features and its impressive durability made it quite enticing for sports and outdoor enthusiasts.

A Rough Start for the G-Shock Brand

Interestingly enough, initial sales of the first-generation G-Shock watch were quite slow. This weak sale statistic can be attributed to its primary appeal towards a relatively niche market. There were even talks about the G-Shock series being discontinued. Can you imagine that? However, a significant swing in momentum came in 1984 when Casio released the DW-5200 model, which incorporated a now-iconic commercial on Western shores.
The commercial featured the DW-5200 as a hockey puck to highlight its toughness. The sales of the DW-5200 skyrocketed in America thanks in part to the commercial. That commercial was so iconic that a similarly-themed G-Shock ad was made in 2018 for the G-Shock GMW-B5000 model.
While the G-Shock series began with the DW-5000C model, the watch line didn’t hit its stride until the DW-5200 model was released. Hence, the DW-5200 was dubbed the “Hero” model as it singlehandedly saved the G-Shock series.

G-Shock’s Rise to the Top

While G-Shock debuted in the 80s, it wasn’t until the 90s that the brand gained worldwide recognition. The 90s was indeed the golden age of G-Shock as this was the decade that introduced a lot of the staple features that modern G-Shocks still use to this day.
In addition to their highly practical and functional timepieces, G-Shock also burst through the mainstream with their limited edition models. These models were designed in collaboration with other famous artists, personalities, and brands. The most recent limited edition G-Shock was the GD-X6900MNM-1, a model developed in partnership with rap icon Eminem. Check out our list of the most sought-after limited edition G-Shock watches for further reference.
G-Shock also broke away from being a niche timepiece with the high-end and metallic MR-G series. In addition, the MR-G watch line showed that G-Shock is not just a sports timepiece for casual wear but also a watch that you can wear during formal occasions.

G-Shock always had the reputation of being a highly masculine timepiece due to its applications and large design. But, of course, Casio understood that there is a whole other market out there that they haven’t cracked yet with G-Shock. Enter the Baby-G watch line.
The G-Shock Baby-G is a series designed for women with its sleeker and lighter design. The Baby-G series debuted in 1994 with the charming DW-420, a more compact version that is just as tough as the original. Here is a complete rundown on the main differences between the G-Shock and Baby-G series. Fortunately, G-Shock also has a watch line for kids which is smaller but just as scrappy.

With G-Shock finally earning its spot in the market as a true powerhouse in the 90s, it is time to focus on revolutionizing the industry, which they did in the 2000s and beyond. During this era, Casio started developing G-Shock watches with outstanding features like the Twin Sensor, Triple Sensor, Bluetooth, Tough Solar, and Triple G Resist.

One of the most impressive aspects of G-Shock watches is how the series constantly reinvents itself. Not satisfied with being known as the toughest, G-Shock continuously ups its game whenever possible. Here is a timeline rundown of all the notable features and innovations added throughout the years.


The G-Shock AW-500 was the first in the series to feature analog timekeeping.

G-Shock released the DW-6100 model three years later, which featured a built-in thermometer. This year was also the debut of the DW-5900, which features the signature triple graph dial design.

G-Shock eagerly met the start of the new millennium as they introduced the first of their Master of G series models, the GW-100, a key feature was that it incorporated radio control functionality.

This year introduced the public to the G-9200 Riseman, the first to feature the Twin Sensor design. The Twin Sensor feature includes a compass and thermometer sensor, making the G-9200 an excellent pick for outdoor enthusiasts.


A year later, a G-Shock model once again revolutionized the series. The GW-7900 model utilized a multi-band six radio-controlled feature and solar-powered batteries. Thus, ushering in the era of modern G-Shock multi-functionality.


The GRX-5600 G-LIDE debuted during this year, and it is a pretty specific G-Shock watch for surfers, thanks to the tide graph feature. The same year also saw the release of the GLX-6900 G-LIDE, which is a deluxe version that offered both a tide graph and moon data feature.

Another notable milestone came in 2012 when Casio released the GW-4000 Gravitymaster and its revolutionary Triple G Resist design. The Triple G Resist build further enhanced the durable G-Shock design by making it impact-resistant, centrifugal force-resistant, and vibration-resistant.
This year also saw the first G-Shock watch feature Bluetooth connectivity get its much-awaited debut. The GB-6900 Bluetooth is the first G-Shock to have smartphone connectivity and a definite game-changer for the series.


It is definitely my favorite year in regards to G-Shock’s history. 2014 was an innovative year for the watch line with entries like the GWN-1000B Gulfmaster with its Triple Sensor V3 and smart access functionality. In addition, the GPW-1000 Gravitymaster also dropped simultaneously, which offered a patented Casio GPS Hybrid Wave Ceptor technology.

Another first came for the watch series with the first G-Shock with a built-in depth gauge, the GWF-D1000 Frogman. Also, they released the premium-grade GWN-Q1000 Gulfmaster with up to four built-in sensors.

G-Shock once again innovated the industry with the GPW-2000 Gravitymaster, the first watch that comes with three-time correction systems.


G-Shock finally entered the sports watch arena with the GBD-H1000 G-Sport, which comes equipped with a heart rate monitor and GPS.

Why Is It Called G-Shock?

The head designer of G-Shock, Kikuo Ibe, wanted a watch that could withstand impacts and won’t even bat an eye if dropped. As you would have guessed, the “G” stands for gravity. G-Shock stands for Gravity Shock.
It is a watch designed to survive the “shock” of the impact caused by gravity. It is a pretty straightforward and cool name for a watch line that excels in delivering functionality and reliability.