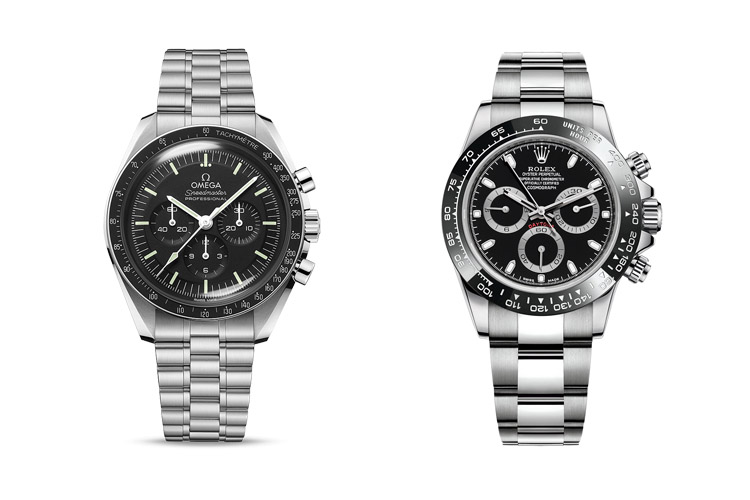 Watches come in lots of different styles and designs, with varying colors, complications, and secondary uses. Although you may have seen the word tachymeter on a watch description before you may not have known exactly what it does.
The way we use timepieces does shift from decade to decade, and a lot of the time, people like to have a watch with a lot of complications just for the aesthetics and not the features. Just because a watch has X feature does not mean someone will use it, they may just like how the complications make the watch look.
In this quick guide, we will be covering the basics of tachymeter watches, a little background about how the complication started, some famous tachymeter timepieces, and other helpful information.

What are Tachymeter Watches?


A tachymeter is a complication found on a lot of sports and racing watches, this is due to the primary purpose of a tachymeter being the measurement of a vehicle’s speed over a set distance. To put this into context, a tachymeter might be used to see how many seconds it takes a race car to travel a mile.
Tachymeter watches have become very common and popular in a lot of non-traditional uses and a lot of consumers like them for the style alone and do not use their functionality. Some people like a more simplistic watch face, whereas others prefer one with more ‘bells and whistles’, it is more often than not about the fashion not the function in a contemporary watch market.
Although we have used the racing example, as this is one of the prominent uses for a tachymeter watch in the past, they can be used to convert any passed time to a rate or in other words seconds to ‘X’ units per hour.

How Does a Tachymeter Watch Work?

One of the best elements of a tachymeter watch is its versatility, due to the function being separate from the measurement unit, the watch can be used to calculate multiple units, from miles, to kilometers, to yards, to meters, to nautical miles.
As long as whatever you are recording is standardized (i.e. the same measurement) you can calculate it using your tachymeter watch.
A tachymeter watch works by calculating the average speed of a vehicle because you are only working out one timed event, so can only accurately say how quickly it was going in that window of time. It could speed up or slow down after you have worked out your calculations, this method only works out the speed on average at the time of capture.
For slower or quicker events a tachymeter watch can be adjusted to account for this, some watches will have a second tachymeter scale which allowed for these micro-adjustments to calculate different times. You can adjust to smaller units to work out slower vehicles’ speeds or vice versa.
Due to the design of a tachymeter watch, you are only able to capture calculations for events that happen in 60 seconds or less, there are ways to get around this if you need to calculate longer events.
For instance, if an event takes 120 seconds, let’s say it takes 120 seconds to travel a mile, you can calculate how long it takes to go a fraction of that, such as half a mile which at that rate would be right on the 60-second mark.

How Do You Use a Tachymeter Watch?


As we have briefly looked at above, a tachymeter’s primary function is to time vehicles travel speed over a quantified distance. A tachymeter is fairly rudimentary to use and serves as a good approximate speed calculator.
A tachymeter will often be on a dial ring or an outer bezel, this can vary from manufacturer to manufacturer but will typically be labeled as such. All you need to do is start the chronograph complication when your chosen vehicle starts and once the set distance has been reached stop the chronograph. Now you can note where the chronograph hand is and this will allow you to calculate the speed of the vehicle and the time it took to reach the end mark (i.e. one mile in our example).
If you want to get into the technical side of the calculations, here is the standardized scale for a tachymeter watch, the timepiece will calculate the number of seconds elapsed and the number of times the event will happen within a 60-minute window.
This would be X = 3600 / t, where X is the tachymeter scale value, 3600 is the number of seconds in one hour and t is the number of seconds elapsed, this allows you to work out the speed. For example, if it took 48 seconds to travel one mile then the speed would be calculated at 75 miles per hour (3600 / 48 = 75mph).

The original use of a tachymeter was actually for use on the stars and being able to track astronomical events and objects, this was invented by Louis Moinet in 1816. This was an unparalleled marvel of engineering at the time and was way ahead of other timekeeping or choreograph efforts.
With this in mind, it took almost a century before the first tachymeter found its way to watches in a way that we would recognize today. Even these early 20th century endeavors were far from what we would use as a tachymeter in the modern era.
It took until the 1960s before the major watch manufacturers would use tachymeters as a standard on their racing and sports watches.
With the boom of competitive racing and the era of Ford vs Ferarri, the need and desire for a tachymeter watch became much more prevalent. This is where the automatic chronograph watches came into their own and really started to pick up speed (no pun intended).
Contemporary watches will now have the tachymeter built into them when the wearer has no interest in using it for its primary function, and they are more of a showcase of the style and design that people have become accustomed to. This is not a slight at modern watch wearers, more that we have better options to calculate speed with more accurate results.

As we have alluded to, the designs for tachymeter watches have taken over the functionality and are more about showcasing the history and style of the timepieces. Here are a few examples of popular Tachymeter watches that you may have seen on the market before.


Synonymous with style and accurate timekeeping, the Tag Heuer Formula One watch comes in a few different color and design options, each of which pays homage to F1 and racing culture.
The peak of racing performance deserves a series of timepieces that are equally intricate and well designed, this is where the experts at Tag Heuer stepped in.
The Formula One series encapsulates the style and precision of high-intensity racing and the craftsmanship that is seen throughout the elite motorsport.


If you know your racing watches or are a fan of iconic timepieces you probably know the Rolex Daytona range, which is named after the infamous Speedway in Florida. The Daytona gets frequent reworks and new designs despite being around since the 1960s.
The Cosmograph Daytona is one of the more contemporary takes on the tachymeter watch market and showcases the craftsmanship of the original designs with a more modern twist and style. Pitched as the ultimate tool for drivers, racers, and fans of speed.

Omega Speedmaster – Dark Side of the Moon


The Omega Speedmaster and the Seamaster are two of the most popular watches of all time and are recognized by a lot of people who are well versed in watches and even people who aren’t.
The Dark Side of the Moon Speedmaster is again, a more modern twist on the classic tachymeter watches that Omega has created.
This timepiece has a style that looks like if Batman was to get into Formula One, the black design with yellow hands and yellow stitching on the strap gives it a unique and stylish look.