Solar vs Kinetic Watches (How They Work + Pros & Cons) 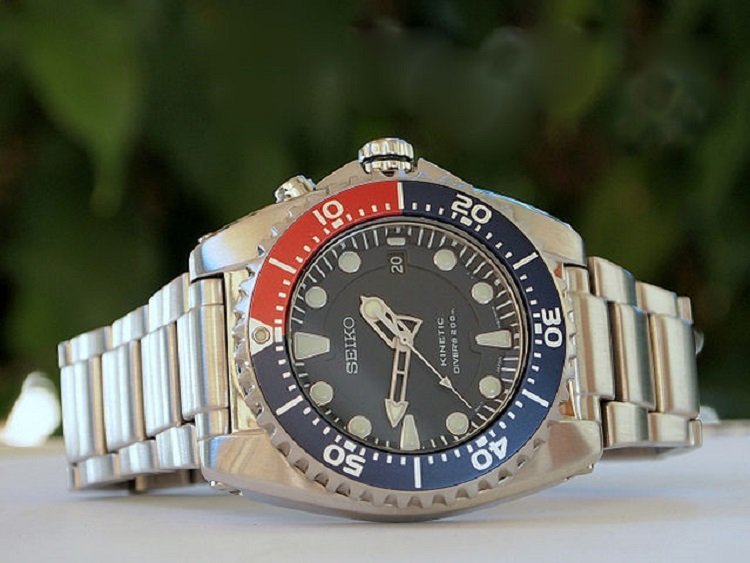 Solar and kinetic watches are both quartz watches that can recharge themselves without the need to consistently replace the battery. However, these watches work in different ways. Let us take a closer look into the mechanics of these watches. Read on to learn more about solar vs kinetic watch.
Kinetic watches and automatic watches both use the movement of the wearer’s arm to power the watch using a swinging rotor.  Solar watches, on the other hand, generate power from ambient light to recharge a storage capacitor. An automatic watch stores power in a mainspring whereas Kinetic watches store it in a capacitor.

Solar watches generate power from ambient light to recharge their storage capacitors. As the term suggests, solar watches are powered by light from the sun. They can also be recharged through other sources of light such as incandescent or fluorescent bulbs. Because artificial sources of light mimic the sun’s spectrum, solar watches can be recharged indoors.
How does a solar watch work? A solar cell is incorporated under the dial of the watch. When light shines through the dial and hits the solar cell, it is converted into electricity. This charges the rechargeable battery under the cell.


Solar watches can be recharged with almost any light. However, it’s good to be aware of how much light a source puts out so you can get the quickest charge possible.
• Direct sunlight in summer – 100,000 lx
• Cloudy day – 10,000 lx
• 5 cm (2 inches) from 30 W fluro lamp – 10,000 lx
• 20 cm (8 inches) from 30 W fluro lamp – 3,000 lx
• Office environment – 700 lx
Lx (lux) is a unit of illuminance used for measuring the intensity of light. One lux equals one lumen (amount of light) per square meter. The higher the lux, the faster you can get your watch charged. It is not surprising that natural sunlight has a much higher lux than artificial light.
If you feel that exposing the watch to sunlight or placing it near a lamp is inconvenient, one thing you can do is use a specifically-designed solar charger. It can produce 30,000 lx, which is way more than ordinary lamps can produce. A solar charger is also compact and easy to use. Just place your watch on the solar charger face down, and it will recharge quickly.

The first version of the solar watch was created by inventor Roger Riehl in March 1968. A prototype followed in 1970, then a full production version, the ‘Synchronar‘, was released in 1972.
At that time, the Synchronar was considered a very unique and futuristic-looking watch. On top of the watch where you would usually see the time displayed, there were two solar cells. Oddly enough, the time display was placed on the side of the watch. The Synchronar had a long production run. It was available up until 2007.
It had some advanced features for the time, such as magnetically controlled switches on top, the ability to automatically adjust for daylight savings and leap years, and is certified for diving up to 700 feet.
The next landmark in the evolution of the solar watch would be the introduction of the Citizen Crystron in 1976. It is the first solar watch with an analog display. It was traditional in appearance but has a large array of four solar panels at the center of the dial.
This started Citizen’s commitment to solar-powered watches which culminated with the development of its renowned Eco-Drive series.


Kinetic watches are similar to automatic watches in the sense that they depend on the wearer’s arm movement to power the watch. The difference is that in an automatic watch, the motion winds the mainspring. In a kinetic watch, the motion charges a storage capacitor. Regular batteries can’t be recharged. On the other hand, storage capacitors act as a battery and can be recharged.
Japanese watchmaker Seiko first unveiled the Kinetic watch in 1986. There is a mechanical weight at the bottom of the watch that drives a small motor and stores the charge in a capacitor. That is what powers the watch.
To charge a kinetic watch, you should wear them regularly. If you intend to use it only on special occasions, a kinetic watch may not be the right type of watch for you.

• Will go “flat” if not worn for long periods
• No way to hand-wind
To learn more about the kinetic watch, read this article.

Both solar and kinetic watches have a symptom that lets the wearer know when the storage capacitor needs to be recharged – the second hand begins to trip. Basically, “trip” means the second hand will skip 2 seconds for every second it ticks. If you own a kinetic watch, you can consider getting a watch winder to charge the capacitor if you are not using the watch on a regular basis. For a solar watch, you can place it under an incandescent or fluorescent light bulb for a few hours to charge it.
Kinetic watches are made almost exclusively by Seiko.
Seiko is a technology-centric company and will keep spare parts around for a long time. If you buy a high-end kinetic watch, there’s a good chance that Seiko can offer a replacement capacitor/battery 10 years down the line.


On the other hand, solar watches are made by various companies, most notably Citizen (Eco-Drive), Casio (G-Shock), and Seiko (Solar). Japanese products are known for their quality and durability. So whatever brand you choose among the three, you can rest assured that the technology behind the watch is solid.
Regardless of whether you choose a solar vs kinetic watch, you will enjoy wearing your watch for many years to come.
Conclusion
Solar and kinetic watches are two of the most popular choices when it comes to maintenance-free, eco-friendly timepieces.
These two types of watches share some features, pros, and cons. The main difference is the mechanism that is used to convert energy into power.
Choosing a solar vs kinetic watch depends on which watch technology best fits your lifestyle.
For more info see our top choices for Best Kinetic Watches HERE
and our list of Best Solar Watches HERE.