What Is A Tank Watch? Cartier’s Iconic Rectangular Timepiece 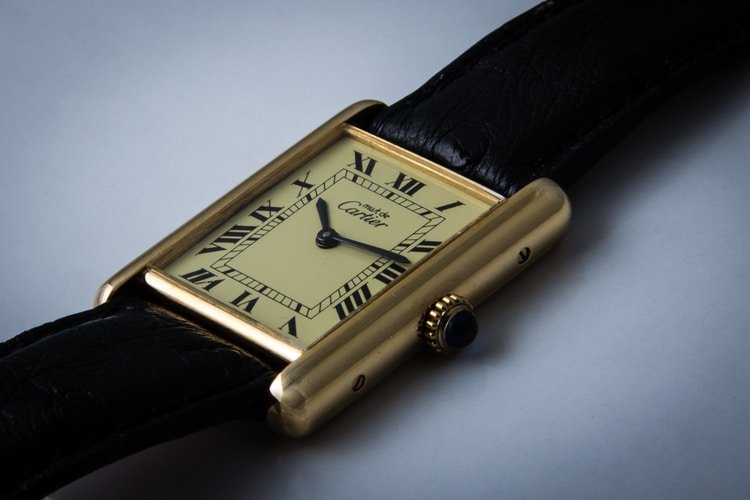 Few wristwatches can claim to bridge the gap between art provocateur Andy Warhol and beloved British royal, Princess Di, but then again, few watches are the Cartier Tank watch. Sophisticated and stylish, the Tank has been the refined choice of movie stars, politicians, tycoons, and more for over 100 years.
The watch has inspired countless imitators, but of course, there is only one Cartier Tank Watch. Let’s look at the history of this iconic timepiece and see how it is holding up in the modern smartwatch era.

History of the Cartier Tank Watch


In 2017, the “most iconic watch on the planet” celebrated a full century of beguiling watch lovers around the world. The company behind the Tank Watch, Cartier, has existed since 1847 when it was founded by French jeweler, Louis-François Cartier. Known for both its jewelry and watches, the company is the preferred supplier of luxury goods for royalty around the world.
The Tank was originally designed by Louis-François’ grandson, Louis Cartier, in 1917, supposedly based on the design of the military vehicle that bears the same name. That design inspiration may be spurious, but the timepiece was cemented into military history when the first of its kind was presented to General John Pershing, leader of the American forces in World War I, as a celebration of victory over the Central Powers.
In 1919, six Tank watches were released and immediately sold out. So began the prestigious career of Cartier’s most renowned and beloved wristwatch. It certainly helped that the number of Tank watches produced each year never rose much above 100 until the 60s. Even as mass production began changing the industry, Cartier hued to traditional production numbers. New leadership in the company led to expanded production of the watch line, but the watch remained a popular accessory for the well-heeled.
In the century since the Tank first appeared, Cartier has released quite a few variations on the model, including the Tank Louis, the Tank Americaine, and the Tank Francaise. Each update tweaked the original design to some degree, but the Tank watch, no matter the version, maintains its distinctive design.

The Design of the Cartier Tank Watch

The original Tank watch established the iconic look: Roman numeral hours; minutes marked by a rectangle with “railroad” or tank tread lines; blue steel hands; and a convex sapphire mounted into the crown. Of course, the watch is probably most recognizable by its rectangle case and its band that almost matches the case’s width. The watch band also utilized a deployment (or deployant) buckle, a type of buckle created by Louis Cartier.
Taken together, the different design elements add up to a truly unique timepiece. As discussed, the various versions of the Tank have changed the design in small, specific ways over the years, but a true Cartier Tank is unmistakable.

Celebrities and the Cartier Tank Watch

Whether the Tank’s icon status is a result of its many famous admirers, or it has earned those celebrity endorsements because of its icon status, the result is the same: luminaries love the Tank.
The list of celebrities, movers and shakers, and royalty who have been seen wearing a Tank is too long to get into here, but just to give an idea of its popularity, consider these famous names: First Ladies Jackie Kennedy and Michelle Obama, actors Clark Gable, Catherine Deneuve, and Fred Astaire, and, of course, the aforementioned Andy Warhol and Princess Diana. Those are just some of the icons who proudly wore (or wear) a Tank.

The classic Tank watch is no longer in production, but the current run includes six different lines: Tank Louis Cartier, Tank Américaine, Tank Française, Tank MC, Tank Solo, and the Tank Cintrée. Let’s take a look at a couple of them.
The women’s Tank Francaise (see its current price on Amazon), first released in 1996, is a fine example of how Cartier has brought their classic timepiece into the modern era. The traditional leather band is replaced by a stainless steel deployment buckle, but the classic Roman numeral and railroad face remain, as does the sapphire crown.


Meanwhile, the Men’s Tank Solo mixes classic and modern the same way it mixes a silver dial with a gold case. On looks alone, it is almost identical to the original Tank. The biggest difference is on the inside: the Tank Solo has quartz movement instead of the traditional Swiss mechanical movement of the original.

Unsurprisingly, with an iconic watch of such distinctive design, numerous other companies have piggybacked off the look of the Tank. Of course, it’s not just the rectangle design that these companies emulate, but the entire aesthetic effect.
Take for instance the SUP880 analog quartz watch by Japanese watchmaker Seiko (click to see it on Amazon). There is no question that this solar-powered wristwatch was based on the Tank, with its signature roman numeral hour markers and the railroad-style box running within the interior.
Seiko is a respectable watchmaker, but it’s not in the same realm as Cartier, which is why you can find their Tank look-alike for a tenth as much as the real deal.


Another company that has clearly taken inspiration from Cartier is American watchmaker, Bulova. Their Classic Collection includes a rectangular watch with a crocodile leather band (check its price on Amazon), which doesn’t completely borrow its look from the Tank, but the resemblance is pretty obvious. The black and silver watch dispenses with the railroad tracks, but it still uses Roman numerals.
Honestly, this watch is distinctive enough to avoid immediate comparisons, but the Tank’s design is so iconic, any watch that even comes close to it will have to accept the comparisons.

There were rectangular watches before the Tank, and there have been plenty since. It’s a style that comes and goes out of fashion. The Tank, on the other hand, seems to defy all rules of fashion, remaining in demand a full century after its creation. Even as the industry turns to hi-tech gadgetry and smartwatches, the classic Cartier Tank remains definitely relevant, as icons always do.