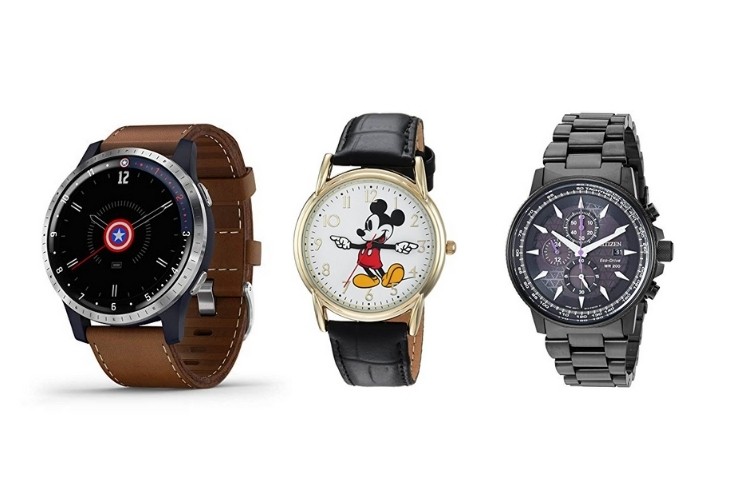 With all of the different brands that encompass Disney, it is hard to not love them in some way, shape, or form. Whether you are playing off the nostalgia factor, watching them with your kids, or love the Mandalorian, Disney shows and films always have a wide assortment of merchandise.

This list will cover nine Disney watches for men, we will be including Marvel, Star Wars, and core Disney in our broad sweep, Fox properties will be omitted, so sorry Simpsons, maybe next time.

With this being said, let us look at some of the best watches you can get that are not only designed for fans but great looking too.

The intricate details of this watch have not been overlooked, from the touches of purple to the tribal pattern background of the face, to the hour dials looking like T’Challa’s Black Panther necklace.

Just like the technology of Wakanda is way ahead of its time, this watch doesn’t need a battery to work. It uses Eco-Drive technology which basically works like solar, and powers the watch indefinitely.

The practicality of this watch continues with its 100m water resistance and chronograph. It is nice to see a watch that is not only good-looking but functions awesomely too.

What more do we need to say? Wakanda Forever.

Gold watches have been a staple of men’s fashion for decades, in the back of our minds I think everyone considers it a sign of elegance and extravagance. This C3P0 watch perfectly blends black and gold to make a contemporary and unique-looking watch.

It is a fairly subtle use of the flamboyant protocol droid’s face which only adds to its appeal. Invicta has created a great-looking homage to one of the most recognizable characters in the Star Wars universe.

The intricate details of this watch make it one of the coolest ones in the Disney sphere; Take for instance the rebel symbol at the 00 mark and on the second hand. The cut-out on the face showing C3P0’s wiring shows real attention to detail.

You will be guaranteed to get some compliments on this watch, as it is one that perfectly blends the stainless steel face with the black silicone strap. See some of our other favorite Star Wars watches here.

We would be remiss to exclude the vintage-looking Mickey timepiece in this list. So, for the interest of nostalgia and Disney fans everywhere, here is the Mickey hands watch.

This watch is certainly for the more overt Disney fan, but you would really struggle to find someone who doesn’t have some kind of emotional connection to a Disney film or property.

The box screams nostalgia and this watch would make a great gift for a friend, loved one, or yourself. With a large face and easy-to-read dials, this watch favors practicality and simplicity, delivering on both.

A much more casual contender than the others on our list, but still a worthy addition. If you are looking for a more low-end watch that still looks appealing then the Mickey Mouse wristwatch is for you.

If you are in the market for a Disney watch that has a modern twist on a classic look, then you are in the right place. Spider-Man will forever be one of the most recognizable superheroes and strong merchandise sales over the last few decades only cement that.

This stainless steel watch with quartz movement and tachymeter has high-end parts for a reasonable mid-range price point. The silver of the band pairs perfectly with the traditional blue and red motif of Spider-Man’s suit.

The subtle logo and web on the face mean this is a fairly covert watch and would be suitable for a range of occasions. Looking like a formal watch but upon closer inspection a comic book lover’s dream, and the intricate details are impressive the more you look.

As with the majority of the Marvel range by Citizen, everything from the backplate/case back to the box has been designed with the fans in mind.  If you’re a fan of rival DC Comics – these watches are for you.

If you are looking for a statement timepiece, this is the one for you. The Galactic Empire watch has an intricate and unique design, with the white and black speckled body looking like you are jumping into hyperspace.

If anyone tells you that the dark side doesn’t have better-looking merchandise they are lying. The red accents to this watch and Empire logo at the 12 mark would appease any Star Wars fan.

This limited-edition timepiece is clearly crafted for the Star Wars elite. Using the centerpiece of Vadar’s Tie Advanced ship on the face with Swiss movement technology below is a master class in top-tier design.

The up to 1000 meter water resistance makes the Galactic Empire not only stylish but practical too, with the addition of the date function, this watch delivers on all fronts.

In short, Invicta knocks it out of the galaxy with this watch.

One of the only Smart Watches on our list has earned its space here with its simplistic and timeless design. Looking like something Steve Rogers would wear on his off days with the brown strap and silver bezel, it goes with anything.

The watch is topped off with one of the best things Cap said engraved on the back “I can do this all day”. Not only is this a powerful statement when his back is against the wall but it is also a great play on words for a watch that has long battery life.

Garmin makes some awesome Smart Watches and this is a super addition to the bunch (no pun intended), the Captain America interchangeable faces work for all sorts of occasions, whether you are fighting Hydra, keeping on the left, or doing your weekly shop.

The incorporation of different elements from Captain America’s signature look shows the attention to detail, from the silver of his shield to the midnight blue on the body to the inside of the strap looking like vintage military apparel.

The Citizen collection of Disney watches are some of the best on the market. The Mickey Collectable is no exception to the rule, combining great aesthetics and a mid-range price point to deliver a perfect watch to add to your collection.

One of the more simplistic watches available but still delivers an iconic and unique looking timepiece that anyone can enjoy. The four mickey silhouettes showcase some of his classic poses from the foot pop, to the hands-out trademark look.

The face is divided into four parts, two in black, two in grey with a Mickey in each, this minimalist-looking timepiece is good for any Disney fan. The red accent on one of the silhouettes and on the hour and minute hands gives a pop of color against the dark background.

The removal of the hours creates a really clean look, with the four blocks acting as the 12, 3, 6, and 9 marks. The use of the date gives practicality to this simplistic watch.

No list would be complete without the real superhero of Marvel, Stan Lee. His tragic passing before the culmination of the Marvel Cinematic Universe sent ripples through the fandom.

This watch from the Citizen Marvel collection not only captures the essence of Stan the man but also looks stylish and understated.

You could wear this watch in almost any setting and it would work, it is a timeless piece that pays homage to a man who united millions and created some of our favorite heroes and comics.

The black with gold and white accents make for a classic-looking men’s watch. With Stan’s iconic phrase ‘Excelsior’ on the back, it is enough to bring a tear to even the most casual Marvel or Disney fan’s eye.

If you thought we would be excluding one of the most recognizable characters in all of cinema on this list, you would be mistaken. Darth Vadar has inspired countless merchandise, trends, and movie villains since his original appearance in Star Wars.

This Smartwatch captures the essence of the fallen Jedi turned Sith Lord, with a mostly black watch with subtle use of red. The interchangeable faces all look slick and encapsulate the menacing and powerful presence of the antagonist.

Seeing the words ‘Rule the Galaxy’ inscribed on the back of the watch serve as a great motivational and inspirational quote, albeit unintentional.

As part of the Garmin Legacy Saga Series, these watches really do try and succeed, to bring the characters to life with these accurate and stylish designs.

Did we miss any out? What’s your favorite Disney-themed men’s watch? Let us know in the comments below.