Bulova and Tissot are two well-known watch brands that have built a solid reputation with their focus on innovation while maintaining the tradition. A quick browse through both companies’ catalog will give you an idea of their aesthetic signatures. You will also notice how both brands’ watch designs are quite close to each other. For the layman, it might even be identical. But is it? 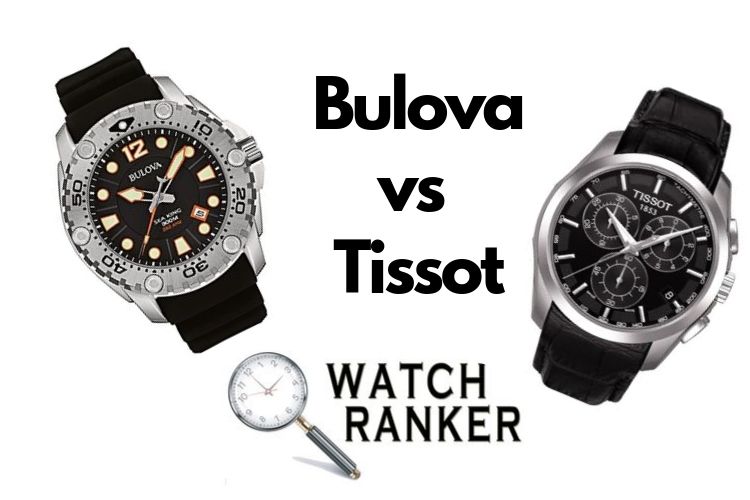 That is what we will be answering today. Bulova vs. Tissot, which one delivers the better timepiece?

Bulova has been around for over 140 years and is still going strong. This is a testament to the company’s ability to adapt to the market. Bulova was founded in New York back in 1875 by Joseph Bulova. The company has since made strides within the watch industry with its innovative designs.

For starters, Bulova is the first watch company to produce an exclusive line of ladies’ watches. They were also the first to prove the power of radio advertisements as Bulova was the first company to take advantage of this marketing strategy in the U.S.

Bulova entered into an exclusive contract with the U.S. military during World War II. During this tumultuous time, Bulova focused on developing altimeters and varmeters for U.S. artillery. Bulova showed that they are still a force to be reckoned with in the watch industry when they unveiled the Bulova-23 during the 1950s. The Bulova-23 is a 23-jewel, self-winding movement watch that revolutionized the industry and is known for its virtually unbreakable mainspring with a water and shock-resistant case.

Bulova also introduced the world to the first electronic watch in the 1960s with its Bulova Accutron. This watch features a 70s sci-fi retro look that made it one of the unique watches during its time. The series still features this design today which makes it a highly sought-after electronic watch for collectors.

Bulova continues to craft some of the most elegant mid-range watches today. And while not a ‘prestige’ brand, Bulova has proven time and time again, that is a serious competitor in the watch market.

Tissot is a brand that is synonymous with sporting events as they have officially partnered with several racing teams in that industry. That alone can give you an idea about where the brand’s strength lies – precision.

Founded in 1853 by the father and son tandem of Charles-Felicien and Charles-Emile Tissot, the company has since grown from a simple small family store to a worldwide company. They began manufacturing wristwatches, with ladies’ models being the first line they sold to the public. Tissot men’s wristwatches came soon after.

Tissot started hitting their stride in popularity during the 1920s and 30s as their wristwatches became extremely popular among men. Tissot continued innovating their watches but did not see a huge leap forward until the 1930s. During the 30s, Tissot introduced the first mass-produced antimagnetic wristwatch, the Tissot Antimagnetique. Tissot was then integrated into the Swatch Group in 1983, further expanding Tissot’s market. During this transition, Tissot focused on creating self-winding and chronograph watches.

As for watch types that Tissot is known for, they have a wealth of self-winding, navigator, and chronograph watches. Tissot has steadily made quite a fantastic reputation for themselves that they have nurtured to this day. For Tissot, it is all about reliability and precision.

Now then, let us take some of Bulova and Tissot’s best-sellers and compare them to each other. What cards does Bulova hold that Tissot doesn’t, and vice versa? Let’s find out.

Let’s start with the watch type category that both brands are well-known for, the chronograph type watch.

The chronograph feature in the Precisionist is quite advanced and is accurate up to 1/1,000 second. Saying that this is an impressive feat for a consumer-grade watch is an understatement. In regards to other features, the Bulova Precisionist is an absolute beast. It features Japanese quartz movement with an analog display within a 46.5mm stainless steel case.

A scratch-resistant mineral window protects the dial. The band is also made from stainless-steel which complements its overall rugged yet elegant aesthetic. The stainless-steel band utilizes an easy to use fold-over clasp. A single push-button safety closure secures the clasp.

The watch is also designed to be water-resistant for up to 984-feet, making it suitable for mixed-gas diving activities. Overall, the Bulova Precisionist certainly gives an air of power and strength while maintaining its attention to detail and containing all features with finesse.

One thing Tissot watches all have in common is their affinity towards the sporty design. The Tissot PRS 516 shows its love for racing with its aesthetics. This watch features Swiss-automatic movement with analog display. It features a stationary bezel attached to a 45mm stainless-steel case. The durable and comfortable rubber strap completes the racing car look the Tissot PRS 516 is going for.

An anti-reflective and scratch-resistant sapphire crystal protects the dial and sub-dials. You know this watch is designed for outdoor use. The watch is also water-resistant for up to 330-feet, which allows it to withstand the occasional splash but not suitable for scuba diving.

This burly watch incorporates the ETA C01.211 automatic movement giving it incredible precision. The PRS 516 also comes with a 46-hour power reserve. Its hands are coated with a luminescent finish for better visibility in low-light environments. With the bezel and straps all lined with yellow accents which considerably adds to the watch’s robust flair.

When it comes to the Tissot PRS 516, it is all about accuracy, and they deliver this with flying colors. If you are looking for a highly reliable and accurate chronograph watch, you can’t go wrong with Tissot.

Best Chronograph Watch – This is admittedly a tough one to call, but based on features and overall quality of construction – we’ll be giving the win to the Bulova Precisionist. The Precisionist is undoubtedly a beast. This is not saying that the Tissot PRS 516 isn’t, as it is as well. But the Precisionist manages to cram more features which give it the edge in this match up.

Another watch category where Bulova and Tissot are known for is the Pilot watch. As the name suggests, these watches are designed to help pilots navigate the skies with optimum visibility as well as displaying essential information.

Pilot watches are known for displaying too much detail that it can be overwhelming for wearers. Which is why we are pleasantly surprised with the neatness of the Bulova Special Edition Lunar Pilot. The dial features a sleek black background with a white accent to help distinguish all necessary details.

The outer ring features a tachymeter dial alongside three other sub-dials all spaced evenly. The Lunar Pilot features a 45mm stainless steel case which is the right size considering the features required in a pilot/aviation watch.

The Bulova Lunar Pilot also comes with an accurate UHF quartz movement and analog display, giving it a considerable boost when it comes to accuracy. The clean and clutter-less display of this pilot watch makes it an ideal timepiece not only for aviators but for casual wear as well.  Additionally, the watch also comes with moderate 164-feet water resistance.

The watch features scratch-resistant sapphire glass and comes with six hands in total (including the sub-dials). Even with all of this, the Lunar Pilot manages to keep things neat and tidy. The stainless-steel case with the silver-tone finish, alongside with the black dial and band gives this watch a no-nonsense and professional appeal. This watch continues the brand’s tradition of making watches able to withstand space travel dating back to its Bulova Lunar EVA that was worn on the Apollo 15 mission. Click here to read more about watches that astronauts have worn in space.

The Tissot T-Touch Expert Pilot takes the best of both worlds and combines them into one of the best aviators watches around. With 15 separate functionalities available and touch screen capability, the T-Touch Expert offers a new level of convenience to the wearer.

As stated earlier, the T-Touch is packed with features such as a built-in altimeter and an altitude difference gauge. Besides the chronograph feature, the T-Touch Expert Pilot also comes with a compass, thermometer, barometric pressure gauge, perpetual calendar, and countdown timer.

It also comes with a backlight for the low-light environment. This analog and the digital hybrid timepiece is designed for optimum convenience and reliability. It is something not only pilots will adore, but outdoor enthusiasts as well. This watch would have been included in our list of top pilot watches under $500 but just missed the mark on price since it tends to retail for about $100 over that limit. If you have the budget it would be worth considering.

Conclusion: Bulova and Tissot – Which is the Better Watch?

Both are brands that are equally steeped in history. Both have been around for over a century which speaks volumes about the quality of timepieces they release. That being said, Tissot slightly leads with its ability to provide innovation and functionality. This is not saying that Bulova lacks innovation; it is just that Bulova tends to lean more towards style, while Tissot offers both form and function.

Of course, this is all subjective, and we implore you to always go with your gut instinct. Both brands are top-tier names in the watchmaking industry, so you probably won’t be disappointed with either.