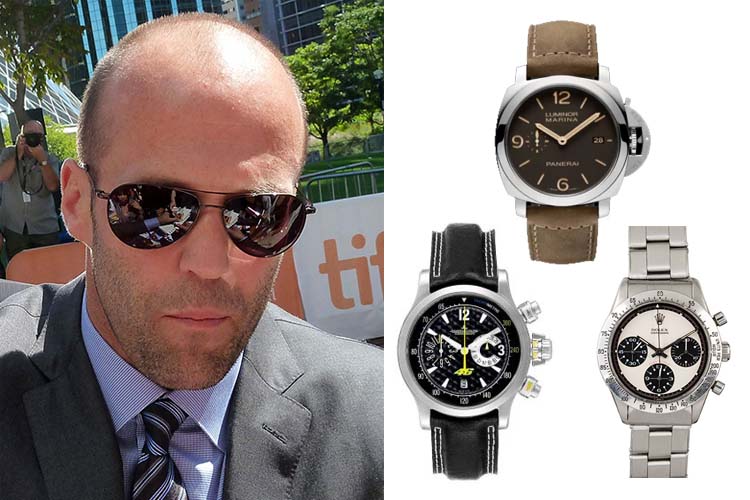 Image Credit: Tony Shek via Creative Commons
Jason Statham is one of the most recognizable action stars of this generation. His spot as one of the all-time great action stars was cemented in The Expendables trilogy, alongside other prominent names in the genre. Not only does he play tough guys on screen, but he is also a legit martial artist – practicing karate, Wing Chun, and kickboxing. Interestingly enough, Statham’s career did not start in the ass-kicking action genre.
Statham started as a model for the designer watch brand French Connection. However, his faithful meeting with director Guy Ritchie helped Statham land his major break into acting. After learning that Statham dabbled in the black market during his youth, Ritchie cast the actor for the role of “Bacon” in his classic comedy thriller Lock, Stock, and Two Smoking Barrels.
The film went on to be quite a hit with both audiences and critics alike. Statham’s next role was for another Guy Ritchie film, Snatch, with well-known actors such as Benicio del Toro and Brad Pitt as a gypsy bare-knuckle fighter with a heavy unintelligible accent. Snatch also became quite a successful film and helped propel Jason Statham to superstardom.

Journey to Being One of This Generation’s Top Action Stars

Jason Statham’s background in martial arts helped him branch out from his initial roles in the Guy Ritchie movies. Director Luc Besson cast Statham as the lead in The Transporter as Frank Martin and its two sequels. This trilogy showcased Jason Statham’s potential as a legit and bankable action star in Hollywood.
Jason Statham starred in several action movies throughout the next two decades, with his most recent and most notable role being his role as Deckard Shaw in the Fast and Furious movie franchise (see the watches he wore in the movies).
His character in the film, albeit introduced as an antagonist, was such a fan favorite that the director and writers switched Shaw as one of the protagonists in the subsequent movies.
In the Fast and Furious Presents: Hobbs and Shaw movie, Statham’s Deckard Shaw even had a spin-off film with another famous action star and fellow watch collector – Dwayne “The Rock” Johnson.

Not only is Jason Statham one of the biggest actions stars in Hollywood today, but the man is also quite the connoisseur of watches. As can be seen from his collection of timepieces below:


This entry is a given, right? Considering that almost every Hollywood action movie leading man has a Panerai watch in their collection. Well, there is nothing wrong with a Panerai timepiece as this is one of the most robust high-end watches in the market.
Jason Statham wore a bunch of different Panerai watches in several of his movies. Most notable are the Chrono Daylight in The Transporter 2 and the Radiomir 8 Days Ceramic in the 8th installment of The Fast and the Furious franchise.
However, Jason prefers the Panerai Luminor 1950 3 Days GMT off-screen. The Luminor 1950 3 Days GMT features a Swiss Caliber P.9001 automatic movement within a rugged 44mm stainless steel case. The case also comes with Panerai’s signature crown guard design and a scratch-resistant anti-glare sapphire crystal window.
The black dial comes with luminous indices and analog hands. Besides, the baton-style hour markers are three Arabic numeral markers – 6, 9, and 12. Additional features include a power reserve gauge and date display. Also, this Panerai Luminor timepiece has a tremendous 3-day power reserve and up to 300-meters of water resistance.

Not only is Jason Statham a watch lover, but he is also a fan of stunning and fast automobiles, which makes the next watch entry pretty obvious. The actor also has the high-octane Jaeger LeCoultre Valentino Rossi sports watch in his collection. This timepiece is a tribute to the Italian racing champion and delivers the same level of high-speed precision as its namesake.
The Jaeger LeCoultre Master Compressor Valentino Rossi is a masterclass in sports watch design. This timepiece features a polished and sleek 41.5mm stainless steel case and a black and gray dial that emulates the car dashboard. In addition, the inclusion of neon green accents within the dial adds an energetic burst to its aesthetic.
Within the JLC Valentino Rossi is a caliber 751 self-winding automatic movement with 41-jewels and top-tier shock absorbers. The dial also features a tachymeter scale, two sub-dials that display minutes (30) and hours (12). The indices and analog hands also have a luminous finish for added visibility in low-light environments.


IWC is another watch brand that Jason Statham wears both personally and on-screen. Statham wore several IWC watches in a couple of his movies, such as the IWC Aquatimer Automatic 2000 (IWC358002) in The Mechanic (2016) and the IWC Aquatimer Chronograph Edition La Cumbre Volcano watch that he wore in The Meg,  the monster shark movie in 2018. Also, both of these watches are not from the costume department and are both from Statham’s stash of watches.
In his latest outing with an IWC watch, Statham wears the IWC Pilot Watch Double Chronograph Top Gun Ceratanium.
This timepiece features a 44mm Cerataniumcase and incorporates a more tactical design with its all-black aesthetic.
The dial displays IWC’s focus on detail and precision with its Double Chronograph design. Some sub-dials display hours, minutes, seconds, and split seconds – giving this IWC timepiece excellent timekeeping functionality.
The build of the watch is also quite exceptional and focuses on aviation with its soft-iron inner case, which provides it with top-notch magnetic resistance. To add a bit of refined flair to its aesthetic, IWC incorporated a convex sapphire crystal window which is both stylish and durable.
Within the IWC Pilot Watch Double Chronograph Top Gun Ceratanium is the in-house caliber 79420 automatic movements with up to 44 hours of power reserve. The watch complication utilizes 29 jewels and delivers a precision of up to 28,800VPH. This timepiece is a great and reliable premium-grade watch through and through.


Besides rugged sports watches, Jason Statham also fancies luxury watches such as the very spendy Patek Philippe. The actor wears a Patek Philippe Nautilus on several occasions, and the refined yet rugged charm of this luxury timepiece fits Statham’s personality quite well.
The Nautilus features a 44mm stainless steel case with a sapphire crystal exhibition case back. There is also the stunning blue gradient dial with sleek baton-style indices and analog hands – both of which have a luminous finish.
A sub-dial also acts as a co-axial (tracks both hour and minute) Chrono counter that accompanies the dial. Inside the Nautilus lies the in-house caliber CH 28-520 chronograph movement with a 28,800VPH to deliver optimum accuracy.
Not many can deliver a design that combines both a rugged and tough appeal with a sophisticated and elegant performance, but the Patek Philippe Nautilus does.


As Jason Statham is a self-professed watch enthusiast and collector, you can bet that he also has a Rolex watch somewhere in his wardrobe. Well, he has a couple of Rolex watches, actually, so let us start with one of his more notable collections – the Rolex Daytona 6239.
Statham’s Rolex Daytona features the reverse panda dial. Coming in with a 40mm Oystersteel case and bracelet, this is a classic and recognizable Rolex watch. Underneath the iconic design is a Valjoux caliber 72 manual winding automatic movement.
The Rolex Daytona is one of the most sought-after watch lines from the world-renowned brand. It is something that a watch enthusiast such as Jason Statham will have.