It’s rare for the crown of a watch to take center stage but in the case of the onion crown, that’s exactly what happens. While we usually don’t pay much attention to the crown of a watch, there are some crowns that form an integral part of the style and aesthetic of the watch.  The onion crown is the perfect example as the striking design of this crown style is hard to miss.

An onion crown on a watch refers to a particular shape and style of the crown. Normally associated with early pilot watches, the onion crown is oversized and has a bulbous shape with parallel ribbing etched into the metal which makes it look very similar to – an onion of course. 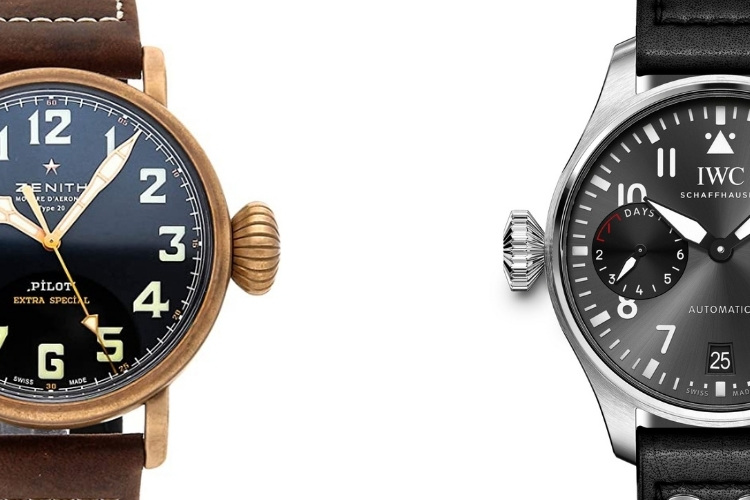 The onion crown functions the same as any other crown, the small knob normally at the 3 o’clock position is used to wind a mechanical watch and set the time by turning the hands of a watch. The difference is the aesthetics of the external part of the crown with its spherical shape and the grooves reminiscent of an onion.

Although the most noticeable feature of these crowns is their shape and styling, the origin is based more on practical functionality. In the early days of flying, cockpits were very cold and pilots wore heavy gloves during flight. Because of that, they needed a large watch crown they could easily manipulate without having to remove their gloves. Making the crown larger and adding the ribbing made it easier to grasp and turn.

As mentioned above, the onion crown was designed with pilots in mind. Because of that, this style crown was normally found on vintage pilot watches early Flieger watches (designed for German pilots). Although now pilots use much more complex watches and no longer have to deal with bulky winter gloves while they fly there are some watchmakers that are still using onion style crowns to give watches that retro look of a classic pilot watch.

Zenith has a long history intertwined with the world of flight and pilots have been wearing the brand’s watches since French aviator Louis Blériot strapped one on in 1909 and became the first man to fly accros the English Channel. This modern version of the Extra Special Pilot Type 20 maintains the vintage look and field of a classic pilot watch and the bronze onion-shaped crown is the main part of that aesthetic. The bronze case and crown add to that look as they take on more character and patina with age.

Longines is another brand with a close connection to the world of flight, having made timepieces and early navigation instruments, and onboard flight equipment. The watch is a near-exact replica of the historical watch that was made by Longines and distributed in the early 1930s by Longines-Wittnauer. The watch was designed by Charles Lindbergh himself to aid him in his solo trans-Atlantic flights.

This Lindbergh watch is a part of the brand’s “Heritage Avigation” line that also includes the Longines Weems Second-Setting Watch, also featuring an onion crown.

This is a reiteration of the IWC Big Pilot with the crown on the left side. The mechanical self-winding movement has an antimagnetic case, 6 bar water resistance and a very impressive 7 day power reserve. This was a limited edition model with only 250 timepieces made. One of the most unique fetaures, apart from its elegant onion crown, is that the power reserve indicator subdial displays in days rather than hours.

Stowa is known for quality pilot watches and this classic Flieger 36 is no exception. The simplistic and minimalist dial on this watch makes the style and elegance of the crown stand out even more.

Here’s a nice wrist shot of another elegant model by Longines with a similar style crown.