Steve Carell’s Watches (On & Off Screen) 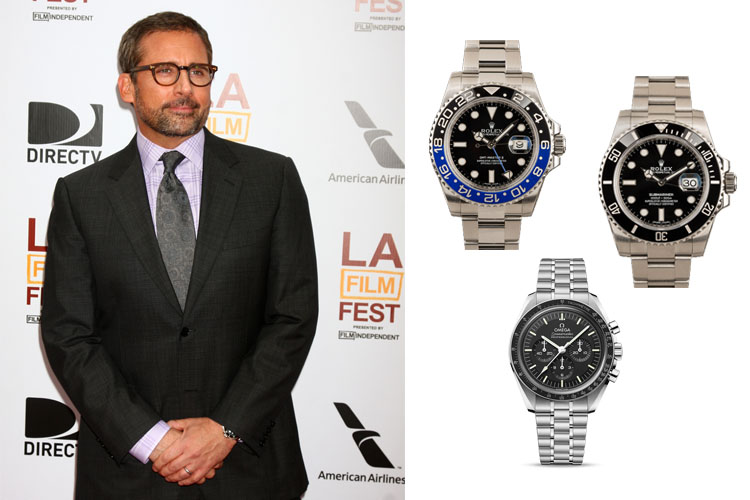 Steve Carell is an American actor, writer, producer, and director. He is also one of the most popular comedians of this generation and will likely be held in the same regards as Will Ferrell, Jim Carrey, and Robin Williams in the future.
Some of his most famous films include The 40-Year-Old Virgin, which propelled Carell through the proverbial glass ceiling and into the annals of Hollywood A-Listers, and in the two Anchorman films alongside other popular funnymen like Will Ferrell and Paul Rudd. However, his most iconic role is most likely as Michael Scott in the American adaptation of the famous British television series, The Office.

While Steve Carell started in the comedy genre, and the man certainly has a talent for making people laugh, he also dipped his toes into more serious dramatic roles. Carell showcased his versatile dramatic acting chops in award-winning films such as Little Miss Sunshine (2006), Foxcatcher (2014), The Big Short (2015), and Battle of the Sexes (2017).
Steve Carell’s turn in these roles garnered him several acting nominations and awards, including the Academy Awards, BAFTA Awards, Golden Globes, and the Primetime Emmy Award. He is currently in the Apple TV+ drama series The Morning Show and other notable actors and actresses such as Jennifer Aniston and Reese Witherspoon.
For those who miss Steve Carell’s unique brand of comedy, he recently returned to the genre in the Netflix series Space Force.

Before we head onto the actor’s watches in his collection, there are several fun facts about the actor that I feel fans should know about.

Steve Carell Wanted to Be a Lawyer

Before going into the comedy and acting business, Carell planned to attend law school. After getting his degree in history at the Ohio Denison University in 1984, he applied to a law school. However, Steve found himself unable to correctly answer the very first question of the application form: Why do you want to be a lawyer?
Without a definitive answer to that question, Carell realized that he genuinely loves acting and telling stories – and off to the races he went.

Steve Carell Worked as a Mailman for a Bit

During his time in the stand-up comedy scene, the actor needed to get a job to sustain his living expenses. It was during this time that he worked as a mailman in Littleton, Massachusetts. The small town’s postal office did not provide its couriers with vehicles, so Carell used his car for delivering mails and packages around town.
This job only lasted four months, though, before Carell moved to Chicago. Steve Carell admits that his stint in the postal service was the most demanding job he ever had. He also admits that months after resigning, he found several mails under the seat of his car. So, maybe being a mailman truly isn’t Steve Carell’s calling. Hopefully, he mailed those letters back to their recipients.

Steve Carell and Nancy Carell Had to Break Up

Husband and wife duo Steve and Nancy Carell worked on a movie together in 2012 titled Seeking a Friend for the End of the World. The film was a drama-comedy wherein the two played a married couple whose relationship is on the rocks. Oh, and an extinction-level asteroid is also heading towards the planet.
As coincidence would have it, the breakup scene was shot precisely on their 17th wedding anniversary. Fortunately, the two are still happily married to this day—a rare case of a Hollywood couple who manages to balance their work and personal life nicely.

Steve Carell Was One Half of “The Ambiguously Gay Duo”

A classic comedy sketch back in the 90s called The Ambiguously Gay Duo debuted in the short-lived but hilarious The Dana Carvey Show. Chances are you are familiar with the sketch if you grew up during this decade, as it was such a hit that it was also brought back for a run in Saturday Night Live. However, you may not be aware that Stephen Colbert and Steve Carell voiced the Ambiguously Gay Duo.

Now, onto our feature presentation. Steve Carell is the definition of a fine wine that gets better with age. From being a popular and successful actor-comedian to having produced and directed his films – Steve Carell indeed leveled up throughout the years.
Nowadays, Steve Carell looks and dresses the part in his stylish two-piece suits and, of course, stunning wristwatches. Here are the most notable timepieces that the actor wore throughout the years.


Steve Carell’s preferred watch brand seems to be Rolex as he can be seen wearing timepieces from this Swiss luxury brand in numerous public and onscreen appearances. Specifically, the actor often wears the classic Rolex Submariner, the brand’s most versatile model. A perfect timepiece that accommodates the actor’s versatile acting skills.
The actor wore the Rolex Submariner during the Academy Awards, wherein he won the best actor award for his role in the movie The Big Short. The particular model that Steve has is the 40mm Cerachrom bezel model.
The Rolex Submariner features the in-house Swiss caliber 3135 automatic movement with 31 jewel construction and delivers 28,800BPH. In addition, the caliber 3135 has a power reserve of approximately 48 hours.
Looking at the aesthetics of the Rolex Submariner, you will notice a black ceramic unidirectional rotating bezel. This is not just your typical ceramic, though, as it uses the patented Cerachrom material. In addition, Cerachrom is entirely resistant to fading, allowing the bezel to retain its luster for an indefinite period.
The black dial incorporates luminous hour markers and Mercedes-style analog hands. There is also a date display underneath a cyclops lens to enhance its readability.
The Rolex Submariner is pretty much the luxury timepiece that collectors should have in their inventory. A true classic of the watch market.


The Rolex GMT II Batman might be Carell’s favorite timepiece as this is the watch he often wears in public. We have to say that he has good taste for Rolex watches as the GMT Master II Batman is quite a beauty with its silver-tone case with black and blue ceramic bezel. There is also the GMT functionality which enhances the overall capabilities of this watch.
The GMT II Batman features a robust 40mm stainless steel case, making it a suitable companion for attending formal events and traveling the globe. In addition, the black dial achieves excellent legibility thanks to the luminous Chromalight coating of the hour markers, and the Mercedes-style analog hands add that extra layer of finesse to the watch’s charm.
The sleek stainless steel case also features a premium-grade sapphire crystal window glass known for its incredible scratch resistance. At the heart of the GMT Master II is the Rolex caliber 3186 automatic movement with 31 jewel construction and 28,800BPH. In addition, the caliber 3186 comes with extra functionalities that include 24-hour GMT, a date display, and a power reserve of up to 48-hours.
If you wonder why this Rolex GMT Master II is known as the “Batman”, well, it’s mainly because of the black and blue bezel associated with Batman’s colors. If you like the look of this (but not the price tag), see these other Batman-Style Watches.
The GMT Master II Batman is also known as “The Dark Knight” and “Bruiser”.

When it comes to attending prestigious events, Steve will shift to the proper attire for his timepiece of choice. During the 2016 Academy Awards, Steve Carell wore a handsome and high-class Jaeger LeCoultre Perpetual Calendar Master 8 Days. Since Carell was also the co-presenter for one of the awards in the event, it is only expected that he dressed to impress. What better way to impress than featuring a luxurious timepiece from Jaeger LeCoultre’s fantastic catalog?
The JLC Perpetual Calendar Master features the date, week, and month displays. What’s more? The JLC Perpetual Calendar can even automatically adjust for leap years. Now, that is some impressive horological craftsmanship.
The watch complication within the JLC Perpetual Calendar is a marvel in timepiece engineering, to say the least. The Swiss caliber 876 mechanical hand-winding movement features automatic calculations for the date and moon phase and will only need correction once every 122 years!


Besides Carell’s collection of expensive and stylish Rolex watches, he also has an Omega timepiece to add a different flavor to his choices of timepieces. Steve Carell has had the iconic Omega Speedmaster in his collection for years now. He even wears the classic Omega timepiece in one of his current television series, Netflix’s Space Force.
In the show, Carell’s character wearing an Omega Speedmaster is a perfect fit as he portrays General Mark R. Naird, who is Project Space Force’s Chief of Space Operations. For a show about putting the U.S. army on the moon, as outrageous as it sounds, you have to feature Omega’s Speedmaster, a.k.a. the Moon Watch.
The Omega Speedmaster Moon Watch’s history is tightly knitted to NASA as this timepiece is the official watch for numerous outer space missions. The Omega Speedmaster is also the first timepiece to reach the moon during the lunar landing of 1969.
With such an impressive repertoire, the Omega Speedmaster Moon Watch must have an equally unique complication within. This is proven to be true with the in-house Omega Co-Axial Master Chronometer caliber 3861. The caliber 3861 delivers optimum precision and meets the Swiss Federal Institute of Metrology (METAS). Along with top-notch accuracy, the caliber 3861 also comes with outstanding magnetic resistance.