Jennifer Aniston is one of the most popular actresses of her generation, with a career in movies and TV  spanning over three decades. She rose to popularity in TV sitcom Friends, and had numerous successful acting and producing roles thereafter.

We’re featuring Aniston on the site because she is an avid watch collector. Below, we’re going to take a closer look at the watches that she has been seen wearing. There will be a number of Rolex models on this list, as the actress is known to collect watches by the Swiss brand. We’re also going to mention some watches that she’s has worn in her films. 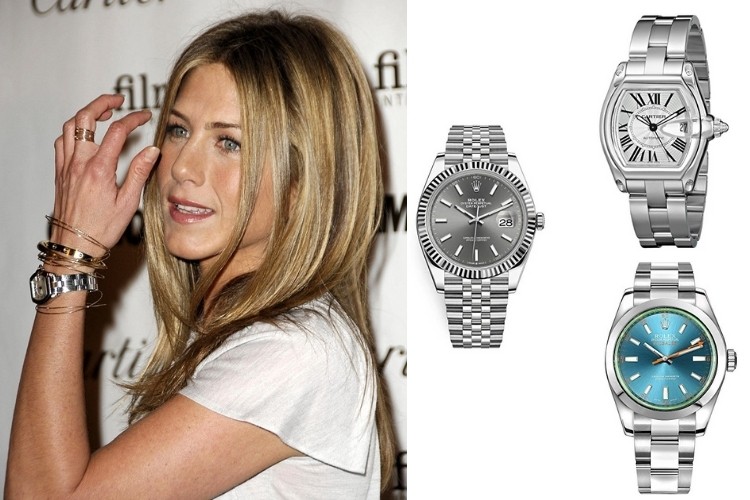 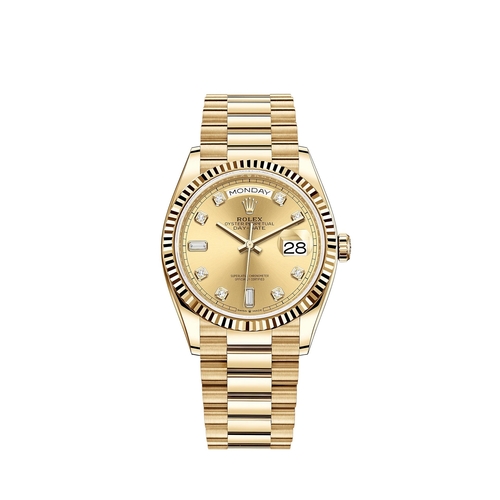 Aniston has been spotted wearing the Rolex “President” Day-Date Watch in TV appearances, like one time in Good Morning America. The watch model is nicknamed as such because it has been worn by different US presidents over the years (Lyndon Johnson, Richard Nixon, and Ronald Reagan).

The watch was introduced in 1956, having a revolutionary and unique style. This was the first self-winding chronometer wristwatch that indicated the spelled-out day of the week at 12 o’clock and has a date window at 3 o’clock.

The watch that Aniston was seen wearing is believed to be a champagne/yellow gold model. The signature design of this watch is the fluted Oyster bezel, which has the distinct purpose of screwing the bezel on the case and ensured the waterproof feature of the timepiece.

This is the bigger model, at around 36-40mm (she was wearing a bigger model, and not the 28mm Lady Datejust model), and has a perpetual/mechanical Rolex 3255 movement, with a power reserve of approximately 70 hours. The white dial has a combination of index and Roman numeral markers, a screw-down crown, scratch-resistant sapphire crystal, and water resistance to 100m.

Looking for homage versions and homage pieces? See them in our article on the best Rolex Day-Date Alternatives.

Another Rolex watch spotted on the actress is the Milgauss model, which appears to have been modified with a PVD coating.

Rolex introduces the Milgauss collection as watches that meet the demands of scientists and engineers. The watch, released in 1956, is able to withstand up to 1,000 gauss (thus the name “mille,” which is a French word for a thousand).

The watch has an iconic design, too. It’s known to have an orange seconds hand that is shaped like a lightning bolt, as well as a green crystal made of scratch-proof synthetic sapphire.

The dial, called the “Z-blue” is an exclusive color that’s only available in this particular Rolex model. The hour markers are luminescent which makes the watch extremely legible.

This model’s resistant to magnetic interference. There is a shield inside the Oyster case that protects the movement. The watch was developed by Rolex in response to the many scientific developments happening in the 1950s when a large number of engineers and scientists were often exposed to magnetic fields, which affected the function of their watches. The Rolex Milgauss is considered by many as one of the best watches with magnetic resistance.

The watch’s resistance is tested and confirmed by European physics lab CERN, which the company continues to partner with to this day.

This is a watch that Aniston usually wears with casual clothes. The Rolex Oyster Perpetual Datejust is a 36mm watch with a signature Rolex fluted bezel, white dial, and a jubilee bracelet.

The Rolex Datejust is made of white Rolesor (a combination of Oystersteel and an 18ct white gold), scratch-resistant sapphire crystal, and an Oystersteel bracelet. This is a perpetual, mechanical watch (caliber 3235) with a power reserve of up to 70 hours. The water resistance is up to 100m.

The watch is also available in bigger sizes—the Rolex Datejust 41mm. The smaller model is the Rolex Lady-Datejust. Introduced in 1957, the watch has a smaller size of 28mm, perfect for those with smaller wrists. This has a number of different models and versions, like one with yellow gold and diamonds, Oystersteel and yellow gold, and Everose gold and diamonds.

If you’re looking for something more affordable, you can check out our feature on some of the best alternatives to the Rolex Datejust. 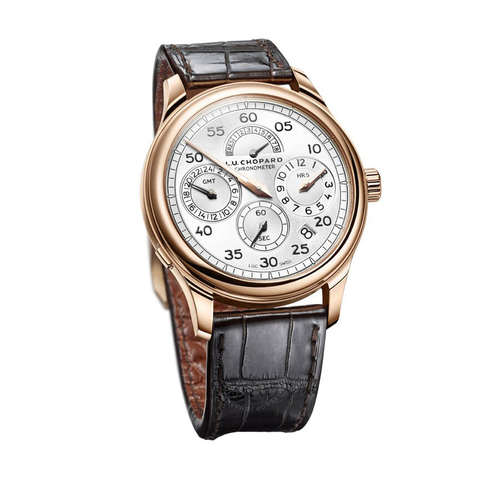 This is one of the watches that Aniston wore in The Morning Show, one of her latest TV shows, Apple TV’s where she plays a co-host of a breakfast news program, a powerful figure that wears equally powerful outfits.

According to an article in The Hollywood Reporter, Aniston’s styling team paid close attention to the details of the actress’s style, from dressing her to big-name brands like Dior and Burberry, to wearing a watch by a luxury brand. They called this “structured luxury,” a statement that shows her status and power. Sharp-eyed audiences spotted these details throughout the series, including one watch that was talked about on Reddit.

The stylists confirmed that the watch is from luxury watchmaker Chopard. The timepiece in question is a 43mm L.U.C. Regulator, which the brand released in 2015.

This model is a rose-gold watch with a central minute hand, and subdials for hours, seconds, and GMT functions—an apt watch for the character she plays. This is marketed by Chopard as a “men’s watch,” because of its size. As seen above, however, Aniston has been spotted wearing large watches from her personal collection. More and more women watch collectors are opting for bigger watches, which usually have more functions and are easy to read.

Another Chopard watch featured on the show is a 40mm L.U.C XPS model, which was matched with a Valentino outfit. This is a simpler version and is about half the price of the L.U.C. Regulator. It has a combination of Arabic numeral and index markers, a small seconds subdial at 6 o’clock, and a date window at 3 o’clock.  Chopard is included in our article on The Watches That CEOs Wear.

Jennifer Aniston fans will want to check out the watches worn on Friends here. 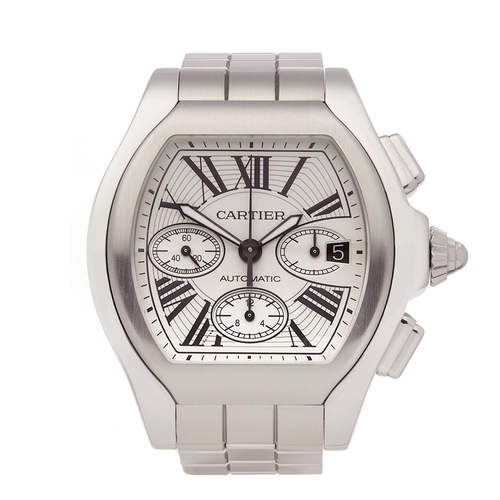 The Cartier Roadster, another model that’s marketed as a men’s watch, has been spotted on Aniston on several occasions. This is a rectangular model, a tonneau-shaped case that was inspired by sports cars of the 1950s to the 1960s—the sunken screws on the lugs, for instance, look like the headlights of classic cars like the Alpha Romeo Spider and Aston Martin Racing.

Available in mechanical and quartz models, the Roadster was introduced in 2001. The watch has a distinctive barrel-shaped case and became popular as a watch that goes well with both casual and business attires.

The watch has a number of versions, from classic three-hand models to chronographs and GMT functions, and has materials like stainless steel, rose, white gold, or yellow gold.

The company stopped production of the watch in 2012, so while it’s rare to find new ones, you can still find pre-owned models on eBay and other sites.. 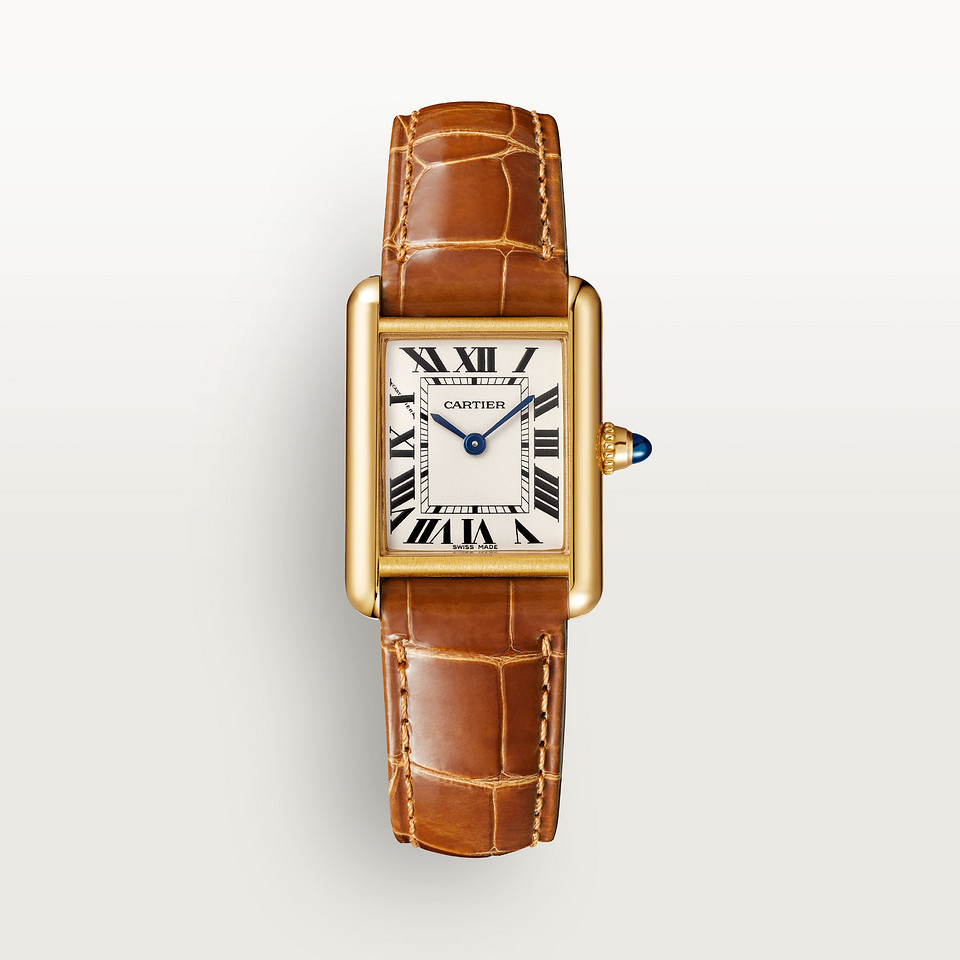 The Tank watch is one of Cartier’s most popular and most sought-after watches. The watch has is a known outfit staple of many celebrities and influential personalities like Princess Diana, Truman Capote, and Jacqueline Kennedy.

The watch, which was introduced in 1917, continues to be one of the world’s most famous and most elegant watches. It’s named as such because it takes inspiration from the tanks used in the First World War.

But one with the most classic design and resembles the original is the Tank Louis Cartier. The watch has Roman numeral markers, and is available in yellow, white, and rose gold with a leather strap.