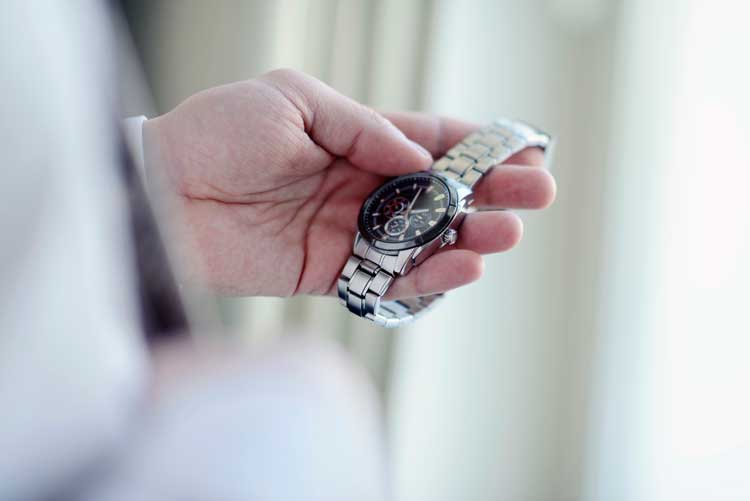 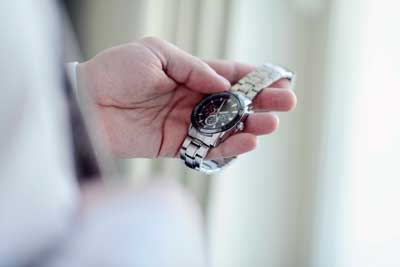 Most watches are pretty reliable, if your watch has a battery you rarely have to think about changing it and most watches last for years or decades. So when a watch stops working it can be a very frustrating experience trying to figure out what the cause of the problem is. Fortunately, many of the reasons have relatively simple solutions.
Quartz watches stop working when the battery dies. Self-winding watches stop if you forget to wind them, and automatic movements will stop ticking if you stop wearing them on your wrist. Beyond these three scenarios, some people wonder why their watch dies for no particular reason. Theories about personal “magnetism” causing watches to stop working have not been proven.
These people have the same thing happen to them time and time again: they buy or receive a new watch, slip it around their wrists, and within two or three weeks, the timepiece no longer functions, either having lost its synchronization or flat-out dying, inexplicably.
Is this phenomenon real, and if so, what could possibly explain it? First, let’s cover the more common reasons your watch might not be functioning.

This may seem too obvious but it is a very common occurrence. While watch batteries can last for years, eventually they do need to be replaced. If you are wearing a quartz watch, the first thing to check is the battery.
Simply swapping out the old battery for a new one is a quick test and fortunately often the solution.

Again, we don’t mean to insult your intelligence but – did you wind it recently?
If you just inherited an old watch and think it’s broken be sure to wind it up and check if it comes to life again. For most watches, you’d need to wind it 20-30 times in a clockwise motion.
*Note – if your watch has a screw-down crown you’ll need to push down and turn counterclockwise to release the crown and then proceed to wind it as described above.
It’s important to note that you can overwind a self-winding watch, this can damage the rotor and be the reason why it’s no longer working. Newer watches have a “clutch” to prevent them from overwinding but it is still important to take care and only wind until you feel the crown tighten
If you wound it up and it still doesn’t tick you’ll most likely need to take it into a watch shop to have it checked out.

You’re probably starting to see a pattern here but we’d rather state the basics before you start doing a lot of troubleshooting.  The first thing to do is wear the watch for a while and allowing the movement of your wrist to power the battery.
However, if the power supply has been totally depleted and the watch is dead your best bet is to wind your automatic watch as described above. 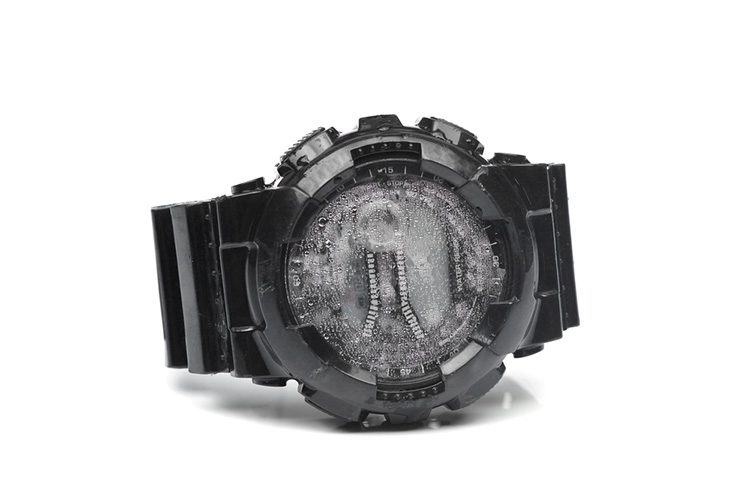 If the watch dies due to water damage – you’ll most likely know that’s the cause. Even with basic water resistance for a watch to stop working it would have most likely been submerged in water or gotten a heavy dose of hydration (showering with it on). If that is the case, you’ll likely see condensation under the case.
There are some ways to remove the condensation from your watch. If these DIY solutions don’t work, or you have a very valuable watch, it’s best to take it to a repair shop so they can open the case and properly clean and dry all of the parts.

Other than water, another common cause that will make a watch stop working is a shock – such as getting dropped on the ground or banging it into a hard surface.
Most quality watches can handle a decent amount of shock that would occur in daily wear, most mechanical watches are designed to protect the balance wheel and other delicate parts from shock using a spring suspension system. Quartz watches, most notably tactical watches like G-Shock have a rugged design, these watches are made to take a beating and still work.
However, there is a limit to what any watch can take. If you’ve recently dropped the watch or banged it against a hard surface this could likely cause it to stop working. Unless you are skilled in watch repair, the only real solution is to take it to a shop.

This last one is less likely and some would say even unbelievable. I’m generally a skeptic when it comes to claims like this. However, I do think for a very small number of people this can be a cause. I only say this because my mother went through an unusual number of watches in her lifetime. Many of them, even high-quality ones, stopped suddenly for no apparent reason.
In some corners of the internet, there is a discussion of a strange phenomenon that remains unexplained and completely baffling. Perhaps you have had this conversation yourself. There are those who are absolutely convinced that they possess a peculiar and malevolent power – or simply bad luck – that causes every wristwatch that they wear to fail.
If you have never experienced this phenomenon of mysteriously stopped watches, you might not understand what the big deal is. Watches break, you’re surely thinking, what’s so strange about that?
For those who are familiar with this confounding occurrence, though, it’s more than just the simple matter of a few broken watches. The issue is that every watch they wear breaks sooner than later, usually in so short a time span that the wearer barely has time to get used to it. This would understandably frustrate anyone.
If this phenomenon is real (emphasis on “if” but we’ll get to that), what could possibly explain it?
When most people hear about this phenomenon, their first instinct is to be skeptical. These people turn to the skeptic’s favorite axiom, Occam’s razor: the simplest explanation is almost always the best. 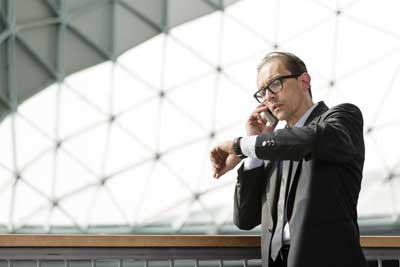 In this case, if someone keeps ending up in the possession of broken watches, isn’t it most likely that they’re merely clumsy or careless? Maybe these people repeatedly hit their wrists against doorways or they keep dropping their watches over and over. It isn’t unreasonable to assume if a person can’t keep their property in working order, that they are responsible for the malfunction.
So, case solved, right? Mulder and Scully don’t need to be called in.
Not so fast, say the many people who own a collection of broken watches but swear they aren’t especially clumsy or careless. There are many people who refuse to accept this explanation because, after having had a collection of watches break on them, they were extra careful and yet still wound up with a dead wristwatch.
For such people, a more complex answer is needed. The answer that has gained the strongest following is strange, but it does have the veneer of scientific authenticity.
The internet sleuths who have been attempting to answer this question for years have come to the conclusion that the best explanation for the mystery of broken watches lies in our individual magnetic fields.
Not to get too technical here, but when you get down to the molecular level, all of us are basically just walking, talking, Netflix-binging electromagnetic fields. It’s the electrical fields between every atom that make up our physical bodies and allow us to interact with the electrical fields of everything else that exists.
Which is to say, when it’s suggested that some people might have a wonky magnetic field that interferes with their watches, it isn’t just hokum; there is some underlying truth to the idea.
It’s a popular theory for a host of reasons, though probably mostly because it makes these people with the broken watches sound like X-Men with superpowers (really lame superpowers, but powers nonetheless).
Unfortunately, as cool and “science-y” as the idea sounds, it doesn’t hold up to the scrutiny of actual science.

You may also be interested in reading: why watches lose time, How Smartwatches work, or find out What a hybrid smartwatch really is?

As was concisely explained in this Slate article, it is a fact that humans have personal magnetic fields. The only problem is, those fields aren’t strong enough to disrupt a wristwatch or anything else for that matter. 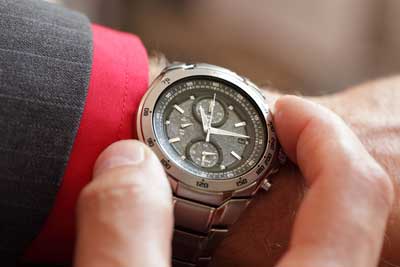 For a person’s electromagnetic field to have the necessary strength to erase a VHS tape (the example from the article), it would have to be so great that it would almost certainly kill that person. The same goes for a wristwatch, or any other electronic or mechanical device you might use.
If your body had enough magnetic force within it to disrupt a watch, then not only would your insides be frying at this very moment, but you couldn’t be reading this article, because your computer or phone would have stopped working ages ago. Every time you went in public, you’d cause massive disruption.
You would definitely get a lot fewer invitations to parties.
Magnetic fields aren’t picky, if they affect some aspect of the physical world, they will have an effect on anything with which they come into contact.
Who can be believed?
If you’ve read this explanation debunking the idea of a disruptive, personal magnetic field, but you aren’t convinced, well, you aren’t alone.
After the initial Slate article was published, that author received an onslaught of responses from people who were still certain their personal magnetism was too powerful. Many of them used their watch problems as proof of it.
While it is true that an individual can temporarily build up an electric field within themselves, either by rubbing their feet to stir up static electricity or by being struck by lightning, there is no way to create a sustained, strong electrical field within an individual.
What that means is, if your watches keep breaking, you aren’t a candidate for Charles Xavier’s School for Gifted Youngsters.
Fine, smartypants, then you explain it


There are quite a few alternative explanations for the broken watch phenomenon ranging from the supernatural to the dismissive. Some contend that an individual’s personal “aura” can disrupt the physical world. This explanation is essentially a spiritual twist on the magnetic field explanation, with the added bonus that it’s harder to test empirically.
On the opposite end of the spectrum, there are those that believe the whole phenomenon is just in people’s heads, a result of misremembering or confirmation bias.
According to this explanation, people who claim all their watches break are merely forgetting (or ignoring) instances when a watch worked fine or didn’t break suspiciously quickly.
Obviously, neither answer will convince everyone. Unfortunately, a definitive answer hasn’t been reached as of yet. It seems like the only way to put this mystery to rest is to conduct tests and publish the results.
Maybe we can launch a watch on Kickstarter together. Until then, it’s likely to remain a hotly debated topic.
And if you’re sick and tired of your wristwatches always dying on you, maybe you should try a pocket watch.