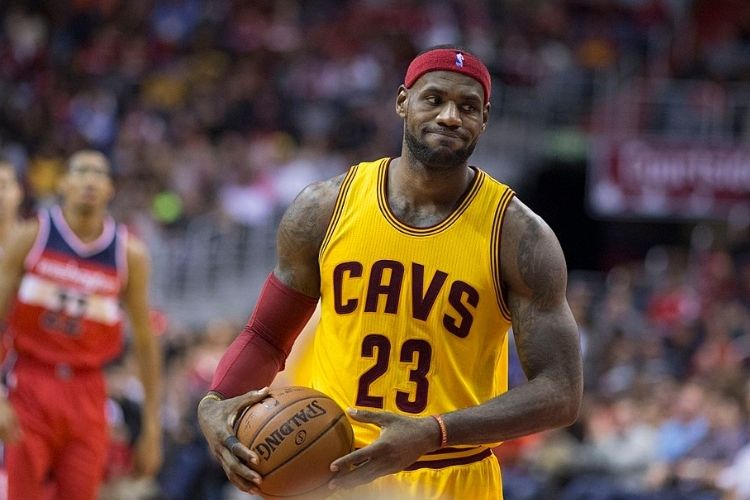 Let’s talk about the watch collection of one of the greatest NBA players – LeBron James.
Lebron James Playing For the Cavs (Image: wikimedia.org)
LeBron Raymone James Sr., also dubbed as King James, LBJ, and Chosen One, is an American basketball player for the Los Angeles Lakers. He also played for Cleveland Cavaliers and Miami Heat.
Lebron James is often compared to Michael Jordan and there are even debates over the GOAT (Greatest of All-Time) title. For LeBron’s fans, he is the GOAT considering that he is the only NBA player who has won NBA championships with three franchises and was awarded as the Finals MVP (Most Valuable Player).


The first watch on our list of  Lebron James collection was not only named after him but James also personally helped design along with watchmakers at Audemars Piguet.
The Audemars Piguet Royal Oak Offshore Chronograph Lebron James is predominantly light gray with a mix of rose gold for the accents such as the 18-karat case, Arabic numerals, and hands.
The octagonal bezel, however, is made of titanium and still has the distinctive eight hexagonal screws seen on the iconic Royal Oak design. It also has a black ceramic crown with an AP logo and push-pieces, and another push-piece at 2 o’clock that’s encrusted with diamonds. Its push-piece guards are in rose gold and gray.
Aside from the chronograph subdials in silver, it also has a date window at 3 o’clock. All these are driven by a self-winding automatic caliber 3126/3840 movement with a power reserve of 55 hours. Lastly, it features Lebrons James’ signature on its sapphire crystal caseback.
Because of its color scheme, design, and style, many say that it is quite unlike other athlete-branded sports watch. For one, it has no reference to the sport. It also doesn’t display the team color or even James’ jersey number.


Lebron James actually owns two units of Richard Mille RM 11-03 – one with a classic brown case and another in blue “Jean Todt” variant.
The Richard Mille 11-03 is a racing car-inspired flyback chronograph powered by automatic caliber RMAC 3 movement with approximately 45 hours of power reserve. It is also equipped with a 60-minute countdown timer, a 12-hour totalizer, and an oversized date and month indicator. The dial is skeletonized allowing you to admire its meticulously crafted 3D movement.
It is built with a three-part tonneau case giving the timepiece a sporty and dynamic look. Additionally, its titanium crown is designed after car wheel rims and tire threads, while the push-pieces resemble the pedals. Because of its choice of materials, it is undeniably as tough as it looks.

It appears @KingJames is adding to his collection of Richard Mille watches, starting with the brand’s signature RM 11-03 https://t.co/T2JMUrHCWr pic.twitter.com/DuJEkoNmVz


Another complicated timepiece on James’ collection is the Patek Philippe 6102R Celestial. It is named such because it displays the sky chart, the moon’s orbit and phase, and the movement of the stars. It also shows the time of meridian passage of Sirius and of the moon. Powering these functions is a self-winding mechanical caliber 240 LU CL C movement. It looks pretty elegant with its rose gold case, sapphire crystal case back, and alligator leather strap with a foldover clasp.


James also has the popular luxury sports watch, Patek Philippe Nautilus. This elegant timepiece is iconic for its rounded octagonal bezel and horizontally embossed dial, and integrated steel bracelet.
The Nautilus collection was first introduced in 1976. Decades later, the brand now offers a wide variety of models, varying in color scheme, functions, and even strap. There’s even a model (5719/10G) that’s been set with diamonds.
However, despite the variety, all models are still costly. If you like its style but can’t afford one, you may also check our post on Nautilus Alternatives (Homage & Affordable).


Speaking of iconic, Lebron James was also frequently seen wearing a Rolex Day-Date II. His is a 40mm yellow gold one with a black dial.
The Rolex Day-Date II has become a symbol of status, power, and fame, and is frequently called “President” (president Dwight D. Eisenhower). Hence, it is a popular choice among celebrities such as Brad Pitt, Ellen DeGeneres, Elton John, and even Michael Jordan.
This classy timepiece comes with a self-winding caliber 3255 movement. On the dial are Roman numerals and the fully-spelled day window at 12 o’clock.
We’ve also created a list of Rolex Day-Date Alternatives if you want to see affordable options.


Lebron James also has Rolex’s most complicated model: the Sky-Dweller. This one is a popular choice among travelers as it displays two time zones simultaneously. Aside from that, it also has an annual calendar function named Saros. These complications are being driven by a self-winding caliber 9001 in-house movement and boast of its Parachrom hairspring that makes the timepiece more precise. It also promises a power reserve of up to 72 hours.
If you’re an NBA fan, be sure to check out watch collections by other top players including Kobe Byrant and Carmelo Anthony.