When Were Watches Invented? A Brief History of the Wrist Watch

The wristwatch is one of the most fascinating inventions in all of humanity’s technological advancement. It is both relatively new in the annals of history, and yet by modern technology standards, almost a relic of the past. Throughout its history, it has been at times an absolute necessity, at others a mere fashion accessory, and still, at other times, both.

Although the clockmaker Peter Henlein from Nuremberg is often credited with inventing the very first watch in the 15th century, other clockmakers were creating similar “clock watches”.
The first wristwatch, as we know them today, was the Breguet watch number 2639 made in 1812 to fit the wrist of the Queen of Naples.
Even today, when the simple wristwatch would seemingly be obsolete, watchmakers are continuing to produce and sell newer and more inventive timepieces. To understand the lasting appeal of the wristwatch, we need to look back at its origin and examine the many stages of its evolution. 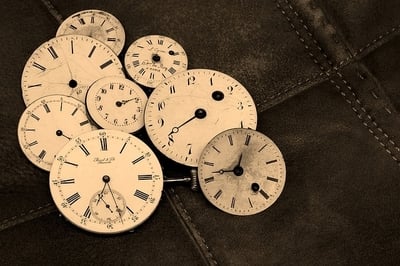 Clocks predate the Common Era, with the existence of water clocks and sundials extending back well into the time period known as “Before Christ.” It wasn’t until the 13th century A.D. that the first mechanical clock was invented, a monumental achievement that would set the stage for the first watch a few centuries later.
Pocket watches were invented well before wristwatches, with the first being created in 1574 in Switzerland. The maker of this watch is unknown, but its depiction of Saint George on one side and the crucifixion on the other is a reflection of the religious fervency of the era. John Calvin, the reformer, had banned the wearing of jewelry, leading Swiss jewelers to scramble to learn a new profession.
The first pocket watches only displayed the hour. Minute hands were added in 1680, and second hands came about a decade after that. Compared to the mechanical watches that would be invented by the end of the next century, these were rather rudimentary machines, but they presaged the coming timekeeping revolution.

The road to the wristwatch 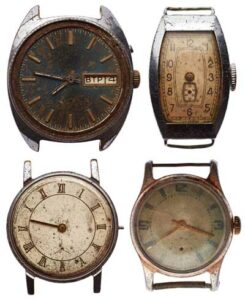 The 17th and 18th centuries led to a massive boom in the popularity of the clock in general, and the pocket watch specifically. First came the pendulum clock in 1656, patented by the Dutch scientist, Christiaan Huygens. This development, which used the reliable rhythm of the pendulum for timekeeping, made clocks far more accurate (the grandfather clock is a perfect example of this mechanism at work).
In 1770, Abraham-Louis Perrelet, a Swiss horologist, invented a self-winding clock mechanism. During the latter half of the 18th century, other developments allowed clocks to be thinner, more precise, and more intricate in their internal design. Together, all of these horological advancements would make the personal wristwatch possible.

The year was 1812, and the Queen of Naples was Caroline Bonaparte, the younger sister of Napoleon. An ambitious and intelligent woman, she also had a keen eye for beautiful furniture, gardens, and jewelry. It is this latter quality that brings her into this story: Swiss and French horologist, Abraham-Louis Breguet, gifted the Queen with the first wristwatch.
Technically, a watch intended to be worn on the arm had been invented previously for another queen, Queen Elizabeth I, but the modern wristwatch is a direct descendant of the style Breguet created. Unfortunately, the actual watch appears to have been lost to time, but its existence helped change the course of time itself.

The growing popularity of the wristwatch

With the first wristwatch being created for a fashion-forward queen, it is unsurprising that the wristwatch became a 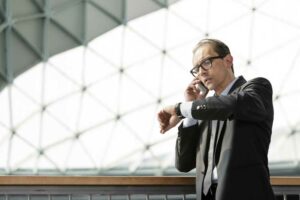 popular accessory for women of the 19th century. In fact, they were exclusively a woman’s accessory for the whole of the century. They likely would have remained so for even longer if not for, as F. Scott Fitzgerald called it, the “delayed Teutonic migration known as the Great War.”
World War I changed the world in countless ways, both great and terrible, but in this story, its effect on timepieces is most important. On the battlefield, soldiers were required to carry a great deal of equipment on their bodies and in their hands. A pocket watch was just one extra piece of equipment taking up valuable real estate on the uniform. The wristwatch offered an obvious solution to this issue.
German troops had been wearing wristwatches since 1880, but it wasn’t until the 1910s that American soldiers started sporting the timepieces. When the troops returned home, they had grown accustomed to wearing the watches. More than that, though, the visual of a war hero wearing a wristwatch was clearly very powerful.
The advertisements practically designed themselves. One such advertisement claimed a wristwatch would make a man “more soldierlike, more martial, more masculine.”
The wristwatch had officially become a unisex fashion piece.

The changing faces of the wristwatch


Up until the 20th century, the development of the wearable watch had been a gradual process, even as horologists were continually coming up with new ways to mechanize their timepieces. After World War II, though, wristwatches entered into a long period of rapid and prodigious evolution.
The post-war period saw watches being developed for extreme conditions ranging from deep-sea diving to space exploration, and everything in between. As decades passed, watches gained all sorts of functions and features that made them more than just timepieces.
The 1970s brought about the “Quartz Revolution.” The creation of battery-powered, quartz timekeeping was a boon for buyers of wristwatches, especially because quartz vibrations are a more accurate means of keeping time than any mechanical device. Unfortunately, for makers of mechanical watches, especially those in Switzerland, the revolution was a crisis. European brands that built their reputations making high-end mechanical watches were suddenly losing profits to upstart companies, mostly in Asia.
Mechanical watches and watchmakers made a comeback in the 1980s, most notably with the introduction of Swatch. Still, battery-powered watches had transformed the industry and digital watches were now widely available.
Quartz, digital watches (as opposed to analog) is more precise than a mechanical watch, for sure, but mechanical watches are made with more care and, frankly, style. For this reason, the watch buying public has mostly been split in the last few decades between those who need a watch for practical purposes, and those who just enjoy the look of a fine, mechanical timepiece.
If you’re interested in the history and evolution of wathces, be sure to check out this list of best books about watches here.

The future of wristwatches 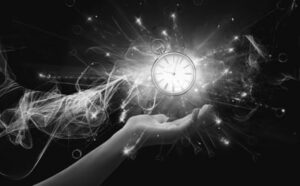 Nobody can say with certainty what the rest of the 21st century will bring for the wristwatch. It’s not entirely unreasonable that we could see the wristwatch go the way of the monocle as other technologies – especially, the smartphone – supplant the need for them.
On the other hand, in the last few years, smartwatches, capable of performing almost as many functions as a smartphone, have broken into the market in a big way. It’s too early to say whether or not smartwatches will catch on with the public at large, but if history has taught us anything, it’s that wristwatches are one of the world’s great adaptable technologies.

Video: A Brief History of Evolution of the Wristwatch