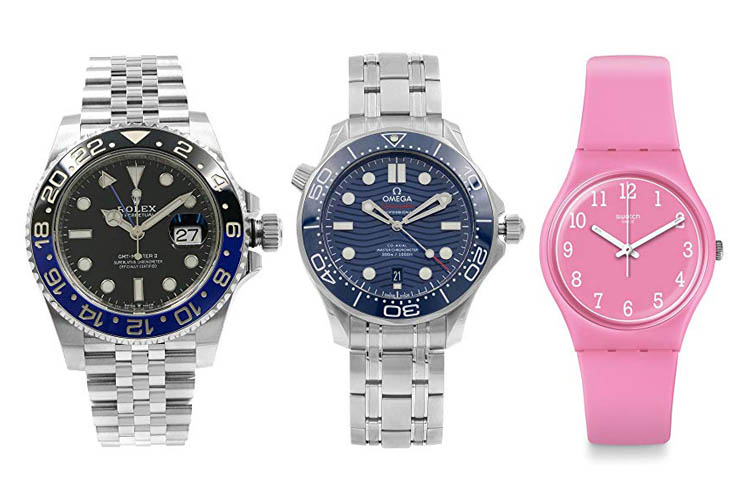 The 1990s have been incredibly influential in our culture today and some of the fashion is still popular almost 30 years later.

When we think of the 90s we all may have different things that come to mind, whether it’s Nickelodeon cartoons, Jurassic Park, Furbies, supersizing at McDonalds, the birth of Google, or the first Harry Potter book.

Regardless of what we remember, there’s no doubt that the culture still bleeds into our lives today.

Celebrity endorsements and their power on marketing and sales were at an all-time high, a lot of people say that’s down to the NBA superstar Michael Jordan, but that is a conversation for another time.

There are some things that should be left in the 90s, three-piece denim we are looking at you, but the watches that popularized that time period helped shape our current timepiece market.

In this short article, we will be looking at just a few of the watches that defined the 90s, were popularized by celebrities, or encapsulate the time period perfectly.

Iconic Watches From the 1990s

One of the most iconic movie characters of all time is undeniably James Bond. He is the essence of cool and suave and has a killer range of watches.

Pretty much from the inception of Ian Fleming’s character, watches have been a major part of the spy’s toolkit.

Not only do most of them look stunning, but often the film versions have special features like a laser or a poison dart. Unfortunately, these adjustments did not make it to everyday customers!

The Brosnan era of Bond was no stranger to a great set of timepieces and gave new life to the popularization of the Omega watch line.

Since Goldeneye in 1995, Bond has gone on to wear an Omega watch in all of the films to date. Pairing the iconic spy with one of the most prestigious watch brands around for almost 30 years.

The Seamaster 300m is one of the most recognizable in the range and is synonymous with class, style, and practicality.

The navy blue and black watch faces have become a staple in the industry, and have remained a popular choice for watches like the Seamaster.

It would not be a list about iconic watches without the world’s most well-known watch brand involved. You could easily make a case for the GMT-Master I, but as the production of that watch stopped in the 90s, we have gone for its sister model.

As with a lot of Rolex models, the GMT-Master II in black and blue is often referred to as Batman, due to resembling the Dark Knight’s color scheme.

The two GMT-Master models may look almost identical to most people but they have some key differences, one of the most noteworthy is the ability in the II to independently adjust the hour hand.

Some of the GMT-Master II range also has a rotatable bezel which became popular when people were traveling time zones more frequently, giving them the ability to keep track of three concurrently.

There is a whole laundry list of reasons why the Master II became so iconic and sought after, but the term ‘too big to fail’ comes to mind. When Rolex releases an update on one of their best-selling timepieces, people tend to take notice.

This robust watch quickly became synonymous with the premium brand and with its unique aesthetics, the sky was the limit for this updated timepiece.

These Swiss-made watches took the world by storm in the early 90s. Swatch watches were designed to be in a similar market to the classic Casio, Timex, and Seiko brands, but targeting younger, trendier audiences.

The name Swatch is often confused to mean switchable-watches, but it actually means ‘second watch’, as they were created to be a casual accessory as opposed to targeted solely as a timepiece.

There are a lot of versions of the Swatch, but the ones that were truly iconic in the 90s were the one-tone bright color timepieces. These watches were vastly different from the majority of the competitors at the time.

As Swatches were designed to be casual, their price tag was and is very affordable, which helped bring the brand to the larger markets.

This was a big shift from the traditional style of Swiss-made watches and a move away from the luxury brands the European country was known for.

Although the majority of the watches are plastic and rubber-feel watches, the brand has more recently ventured into stainless steel and metal cases.

Although, the playful and colorful style is what really rose Swatch to fame. A style that is still captured in the many Swatch stores around the globe.

What happens when one of the most recognizable stars of the 90s stumbles across a small boutique watchmaker in Italy? He buys a watch for himself and 200 of his closest friends and family of course!

Sylvester Stallone wore his new Italian timepiece on his upcoming film Daylight and revitalized the brand. This famously popularized the struggling company and led to a new era for their watchmaking.

Panerai saw a huge boost just off the back of his personal spending.  The purchases that Stallone made kickstarted the brand who was struggling a little in the early 90s.

Sly would go on to wear these watches and Panerai would milk that endorsement for all that it was worth, making a lot of marketing materials around the film and Stallone at the time.

Even in his more recent films, you might catch Stallone wearing one of these timepieces, but he first fell in love with the brand that fateful day in Florence.

In fact, some of the later models by Panerai even used ‘Sly’ tech, in honor of their ambassador. If you like the icon look of this watch – check out these affordable watches with a similar style.

Worn and popularized by one of the most bankable stars of the 80s and 90s, Arnold Swarzengenger. Renowned for his action roles and Greek God physique, there were not a lot of watches that would look right on Arnie’s massive wrists.

Despite receiving a gift from his rival, later his friend, Sylvester Stallone of a Panerai watch following his return from Europe, the Terminator favored his own watch brand, Audemars Piguet.

There is no doubt that the bulky action stars had a big impact on the chunky watch trend that was prevalent in the 80s and 90s. Who wouldn’t want to wear the same watch as some of the film’s most badass stars?

The Royal Oak model premiered around 1993 and was designed with a younger audience in mind. The thick and bulky watch was a perfect timepiece to be worn by Arnie and he really helped popularize this look.

There are a few different versions of this watch, but the one most attributed to the Governator is the wooden color scheme, as the name ‘Royal Oak’ would suggest. If you like the look of this watch but not the price tag, we have a list of affordable royal-oak-like watches here.

The original G-Shock came out in the 80s and continued to be popular throughout the 90s. Still one of the most popular and recognizable watches on the market.

Off the back of this success came the ‘Baby G’ which was the less bulky women’s version of the popular watch. This was released in the mid-90s and was instantly popular.

The Baby G ventured into a new world for the G-Shock with an expansive range of colors, which brought in a renaissance for the brand. This range helped breathe new life into the customizable and styles available today.

The changes made popular by this series still affect how G-Shock and their parent brand Casio conduct their business and design new models to date.

Years later, Rihanna would be seen donning a bracelet of these iconic timepieces and continued their popularity to a newer, younger audience.

Timex has a long and storied history, from WWII to licensing a Mickey Mouse watch, to being a staple watch for a lot of households around the US.

The range of watches designed for the Ironman events was a stroke of genius and a great move by the popular watchmakers. The Ironman series was launched in the late 80s but reached its highest sales in the 90s.

The biggest and most impactful change to the watch and the industry was introduced in 92. This was the addition of the signature night light ‘Indiglo’ on the Ironman range of watches.

At the time, this was a revolutionary change, the touch of a button would like up your watch with a light blue hue. This Indiglo feature is part of the majority of the Timex watches to date.

This change was as impactful as the watch is iconic, and is more than enough reason for a spot on this list.

Although this model is not the exact one from the 90s, it is the updated version of that classic popular timepiece.

The 90s influenced us in a whole host of ways, as we can see there was a big push on celebrity endorsement and the power of their watch choices.

These are just some of the thousands of watches that were popular in the 1990s, but arguably have some of the biggest impact or recognition in the industry to date.

That brings us to the end of our list. What watches did you love in the 90s? Did we miss your favorite? Let us know! See you next time.