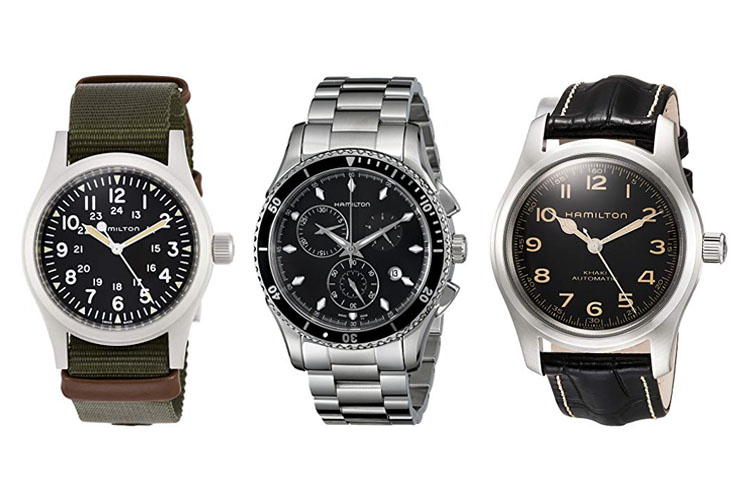 Hamilton is a classic brand that has ingrained itself within the American culture. While the brand is now considered a Swiss brand, Hamilton still wears its “Red, White, and Blue” spirit on its sleeves. Other than having its roots firmly in the heart of America, the brand has also branched out to another widely popular medium – the film industry.

Of all the watches that appear in movies, Hamilton is one of the brands that clearly stands out – Hamilton watches have appeared in over 500 movies!

In this article, we will be looking at the most iconic watch models from Hamilton that have basked in the limelight of the silver screen. There are far too many models to cover in one article but we’ll go over the most iconic Hamilton watches that have appeared in popular movies.

So, it is not surprising that it is attributed to movie characters in the law enforcement profession.

The black dial accentuates the luminous diamond hour markers and dauphine hands. As for the three sub-dials, the silver-tone accent helps improve its visibility and legibility. Additionally, there is a date display located beside the 4 o’clock marker.

Inside the classy exterior is a caliber 251.274 quartz movement. The case also comes with an excellent water resistance rating for up to 100-meters.

There is also another Hamilton timepiece in the film, the limited-edition Khaki Navy BeLOWZERO Auto, which comes in Blue and Red versions. These two Hamilton analog watches feature a more tactical design. The design bases itself on the digital time-traveling watches in the movie, also designed with the help of Hamilton.

Simple yet features a dash of elegance; the Khaki Field Murph adds a certain level of finesse to its aesthetics. The Murph Auto incorporates a rudimentary round silver-tone stainless steel case with the standard Hamilton Field Watch. The Khaki Field Murph Auto comes in with a well-rounded 42mm diameter case and a rugged black leather strap.

A scratch-resistant with anti-glare finish sapphire crystal window accompanies the robust round case. The exterior design also provides the Murph Auto with solid 100-meter water resistance, making it suitable for swimming and snorkeling.

The black dial accentuates the luminous orange tinge Arabic numeral hour markers. There are also striking cathedral-style hands that enhance the overall sophisticated charm of this timepiece. Also, caliber H-10 mechanical movement is under the refined dial, injecting this timepiece with an impressive 80-hour power reserve.

This timepiece is worn and named after the character Murphy Cooper, played by the talented Jessica Chastain in the mind-melting science-fiction film, Interstellar (2014).

As a top pilot watch should, the Khaki Aviation focuses on legibility, which it delivers in spades.

The design of the dial is impeccable, and the symmetry is quite fantastic. All the detail presented within the black dial is highly legible and well-organized. The silver-tone Arabic numeral hour markers come in minutes (outer rim) and hours (inner rim). The date display is at the 6 o’clock position, and a prominent day display at the 12 o’clock position.

Underneath the highly detailed design is the caliber H-40 Swiss-automatic movement, which boasts an outstanding 80-hour power reserve.

This pilot timepiece also has an impressive 100-meter water resistance rating, making it a suitable watch for air and sea.

The black dial incorporates silver-tone and bold Arabic numeral hour markers. In addition, the inner rim features a 24-hour format marker, and there is also a date display located at the 3 o’clock position. The luminous analog hands contrast the black background, while the red-tipped second hand allows it to distinguish itself further.

The Khaki Field Auto’s case also features a build that allows it to meet a water resistance rating of up to 100-meters. In addition, the caliber H-10 Swiss-automatic movement with an outstanding 80-hour power reserve is at the heart of this stylish yet rugged timepiece.

The classic military aesthetic of the Khaki Field Auto is probably the main reason it is in The Avengers (2012) movie. How else can you highlight Hamilton’s all-American spirit than by having Captain America, played by Chris Evans, have it as his primary timepiece of choice?

The watch’s connection to the movie makes it a perfect watch for Marvel fans.

Coming into the stage with a no-nonsense and sleek black tactical aesthetic, the Khaki Field Auto Chrono is as tough as it appears. The black dial features luminous sword-shaped hands and Arabic numeral hour markers that exude a degree of rigidity to its design. This Hamilton timepiece is directly inspired by tactical military equipment, along with the 42mm black PVD stainless steel case and black textile band.

Inside the rugged case is the caliber H-21 chronograph Swiss-automatic movement with a solid 60-hour power reserve. In addition, the exterior build of the Khaki Field Auto Chrono also gives it excellent 100-meter water resistance, and the sapphire crystal window significantly boosts its scratch resistance.

This particular timepiece had a decent exposure in the John Krasinski action thriller series, Jack Ryan. The titular character wore the Khaki Field Auto Chrono during season 1 and season 2. The all-black tactical design of the Hamilton chronograph watch made it a perfect companion for the former U.S. Marine and CIA agent, Jack Ryan.

The Khaki Aviation X-Wind features all the vital elements of a pilot watch: accurate, legible, and functional. One of Hamilton’s unique features to the Aviation X-Wind is the drift angle calculator, which helps pilots calculate the crosswind factor during their flights.

This Hamilton pilot chronograph watch utilizes a technical design with its 44mm stainless-steel case. Accompanied by a sapphire crystal window, the Aviation X-Wind Auto Chrono is also quite robust. Additionally, the case comes with 100-meter water resistance, making this timepiece suitable for swimming and snorkeling.

Over at the back, you will see that Hamilton employed a transparent case that complements the caliber H-21 Swiss-automatic movement within. The sophisticated complication that makes the Aviation X-Wind Auto a marvel to behold. Additionally, the H-21 automatic movement provides this timepiece with an impressive 60-hour power reserve.

The Jazzmaster Day Date Chrono exudes such a refined style that this is among our picks of the best dress watches in the market today. The polished 40mm stainless steel case and brown leather strap, along with the elegant dial design, make this quite a striking traditional timepiece.

The white dial accentuates the gold-tone dagger indices and luminous dauphine hands. There is also a day display located at the upper rim and a date display at the bottom. The dial utilizes an anti-glare and scratch-resistant sapphire crystal window for added durability.

Inside the classy design of the Jazzmaster Day Date Chrono is the caliber H-40 Swiss-automatic movement with a power reserve of up to 80 hours. True to its Jazz moniker, this Hamilton dress watch delivers a level of finesse and class while keeping things pretty subdued.

If one particular Hamilton watch has managed to engrain itself into pop culture history, it is undoubtedly the unique shield-shaped Hamilton Ventura model. This timepiece first garnered attention when Elvis Presley personally handpicked it for his 1961 film, Blue Hawaii.

The eye-catching design of the Ventura made it an iconic timepiece for Hamilton. With its sleek 31mm stainless steel shield case and anti-reflective mineral crystal window, it delivers that high-quality vibe in spades. The inclusion of a black leather calfskin further adds to its classy appeal.

Underneath the timeless design is a quartz movement that provides excellent precision at all times. The Ventura also holds a decent 50-meter water resistance rating which means it can withstand brief immersions.

Besides being a favorite of Elvis Presley, the Hamilton Ventura also became a staple of the blockbuster science-fiction franchise Men in Black (1997 – 2012). The Ventura is the official timepiece given to MIB agents and is on Will Smith, Tommy Lee Jones, and Josh Brolin’s wrist throughout the first trilogy.

Another stylish dress watch from Jazzmaster, the Viewmatic Auto, comes with a 40mm PVD red stainless steel case. This timepiece also features a transparent back case to give a clear view of the complex caliber H-10 Swiss-automatic movement that makes it tick. In addition, the movement packs a whopping 80-hour power reserve, making the Viewmatic Auto extremely reliable.

The dial incorporates a combination of gold-tone Arabic numeral and dagger indices and luminous dauphine-style hands. There is also a prominent date display that is over at the 3 o’clock position.

The Jazzmaster Viewmatic Auto is among the myriad of stunning timepieces featured in the award-winning television series, Billions (2016 – 2021). The Viewmatic Auto is worn by Paul Giamatti’s character, Charles Rhoades Jr, during seasons 1 to 5.

Designed for use by the U.S. Navy ‘Frogman’ teams, the Khaki Navy Frogman Auto is as practical, functional, and reliable as you would expect. Utilizing a case build that provides it with outstanding 300-meter water resistance, the Frogman Auto is suitable for most water-based activities, from swimming to scuba diving.

The 42mm case comes with a unidirectional rotating bezel, a must-have feature for dive watches. The case also incorporates an anti-reflective and scratch-resistant sapphire crystal window. In addition, the Frogman Auto utilizes a transparent back case to fully appreciate the caliber H-10 automatic movement to give users a great view of its inner workings.

The caliber H-10 automatic movement also comes with a power reserve of up to 80 hours. Legible and reliable, the Khaki Navy Frogman Auto is one of the best dive watches around.

With its long history with Navy Frogmen, it comes as to no surprise that the Frogman Auto was the timepiece of choice by one of Aquaman’s most formidable foes, the Black Manta, played by Yahya Abdul-Mateen II.