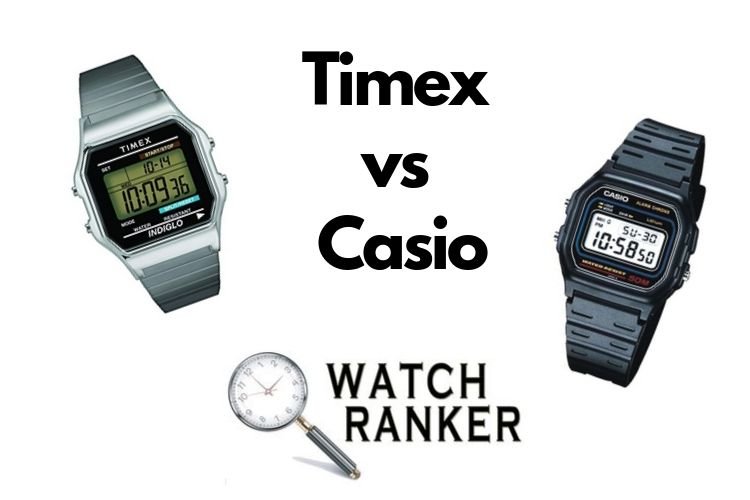 If there are two watch brands out there that always manages to elicit a positive reaction, it is Timex, and Casio watches. Both brands are known for having top-quality watches that come in a wide range of prices and unique designs.

Both Timex and Casio are veterans of the industry with decades upon decades of experience between them. Their equally storied history also makes them a good comparison discussion for watch enthusiasts. Today, we will be comparing two of the most popular giants in the watch industry. If you are a watch aficionado, this will be a treat for you!

Timex has been around for over a century. The company was founded in 1854 in Waterbury, Connecticut. Ever since their humble beginnings, Timex has always strived to provide its customers with quality affordable timepieces. Until today, Timex is known for offering a wide variety of watches with a flexible price range. Guaranteeing that they have a watch for everyone.
Timex built its reputation around this doctrine of manufacturing reliable and affordable watches for decades. It was not until 1914 when Timex shifted their focus of crafting wristwatches. During their transition to wristwatches, Timex was able to come up with signature designs that helped propel the company to the upper echelons of watchmakers.
Some of their well-known proprietary watches are the V-conic watches, which is their affordable watch series and the Mickey Mouse design watches. They also developed and introduced the first sports watch, the Timex Ironman.
Timex watches are still known for being as the go-to brand for those looking for high-quality yet highly affordable timepieces. Timex is primarily known for this, which is why they are commonly compared to the Casio brand, and vice versa. Casio is another brand known for providing customers with reasonably priced watches that still offers high-quality performance and construction. Speaking of Casio…

Casio is a Japanese -based company that was founded in 1946 and stared as a manufacturer of microscope parts and gears. Casio is one of the more well-known brands that managed to branch out and expand in the gadget manufacturing market. Casio unveiled Japan’s first electric calculator in 1954 and the first compact all-electric calculator (Casio 14-A) in 1957.
Casio first made significant waves in the watch market with the introduction of their most popular watch series, the G-Shock, in 1983.


The G-Shock series by Casio is the firs ever shock-resistant watch and managed to capture the attention of the market with its rugged and tank-like appearance. In an era when sleek and lightweight watches were the norm, having this sturdy beast of a timepiece was a breath of fresh air.
The Casio G-Shock built its reputation on its extreme durability. Making Casio G-Shock watches a perfect watch for outdoor enthusiasts due to its reliability and performance.
In 1994, Casio introduced their Baby-G series which is a more compact version of their G-Shock watches (one of our top recommendations for women G-shock wearers). By this point, Casio has secured its place as being one of the premier manufacturers of digital watches.
We can also chalk up Casio’s reputation for being the watch of choice for our favorite fictional action heroes in the 90s with their focus on producing tough as nails wristwatches. For example, the internet’s lord and savior, Keanu Reeve’s character in the box office hit, Speed, was sporting the Casio G-Shock DW5600C-1V. Exactly what you would expect a bus-jumping and bomb-disarming action hero to wear.
Casio is also known for being the first company to dive into the smartwatch market. In fact, they predated the Apple Watch (2015) by a good 24 years with their Casio VDB-1000 in 1991. This early 90s Casio watch offered touchscreen capability and featured a built-in phonebook, notepad, and organizer.
Casio has always been at the forefront of innovation when it comes to digital watches. To this day, Casio’s G-Shock series is still selling like hotcakes thanks to their constant reinvention of the wheel.

If there is one category where Timex and Casio watches are always going at it neck and neck, it is the digital and tactical watch market. But who owns the best watches in this market? Let’s compare the best each brand has to offer.

The Ironman Classic is one of Timex’s premier models in this category. Its feature-pack design and affordability quickly push it near the top of any top 10 list. The Timex Ironman Classic also offers variety to its customers with 18 different color variations to choose from.
Digital watches excel in providing a wealth of features, and the Timex Ironman Classic delivers an excellent selection of functionalities in this area. The Ironman Classic comes with your standard stopwatch and countdown timer. It also features the Indiglo Backlight technology for optimum visibility in low-light environments. This watch is also well-constructed and has a water resistance of up to 100m.
The Ironman Classic also comes in three versions: the 30, 50, and 100. This indicates the number of lap memories during their training sessions. For athletes, the Ironman Classic 50 and 100 are recommended while 50 is suited for casual use.
The excellent price tag and functionality helps the Ironman Classic watch series obtain a generally positive review online. The watch’s impressive level of durability has made it a favorite for individuals who require something reliable and robust. This watch is popular with specific lines of work like construction workers, nurses, and paramedics, among others.


Chances are you already know about Casio’s G-Shock series, which means you already have an inkling on what to expect with this entry. For those who are not familiar with the G-Shock watch series, here’s the gist; it is one of the most rugged and tough digital watches that you can get your hands on.
One unique feature of the G-Shock DV9052-1V is its more compact design. If you want a G-Shock that would accommodate your smaller body frame, this is an excellent choice for you. This digital watch comes with a 48.5mm resin case and is protected with a mineral dial window. As you can see, it is slightly smaller in comparison to the standard G-Shock size of 50mm and above.
This G-Shock is also designed to be water-resistant for up to 200m. This makes it suitable for a wide range of water sports except for scuba diving. When it comes to its essential functions, the DV9052-1V incorporates Quartz movement with its digital display. It is also jam-packed with features such as a stopwatch (1/100-second), auto calendar, multi-function alarm, 12/24-time format, and an hourly time signal.
As for additional features, this digital watch comes with countdown timer, daily alarm, and EL afterglow backlight. However, the number of features packed into this G-Shock might be a tad overwhelming for some. That being said, this is an exceptional digital watch that comes with nearly everything you need a timepiece to do, and then some. It is also extremely affordable, as well.

Best Digital Watch – Overall, Casio manages to get the win in this round. The sheer number of features they include in their G-Shock series can easily overwhelm any competition; even Timex will have a hard time keeping up. G-Shock is also known for its impressive durability and reliability, at an affordable price mind you.

The Timex T49612 Expedition Trail is explicitly designed for outdoor activities. With that in mind, you can expect this watch to be extremely durable and designed to withstand whatever the natural elements throw at it.
As the names imply, this is an excellent watch for outdoor enthusiasts. Its main feature is a highly reliable and accurate built-in compass. The overall design of the watch takes into consideration the legibility of what is displayed on the digital display. This means less clutter while providing the necessary information.
The built-in compass features bearings based on 16 cardinal points, which further improves its reliability. It also comes with a 100-hour chronograph function and an Indiglo backlight. It is also made to be water-resistant for up to 200m. When it comes to participating in any outdoor activity, from hiking to spelunking, the Timex T49612 is an excellent tactical watch to bring.


The Casio Pathfinder features a dual-layer LCD screen alongside a rotating register ring mechanism. This rotating mechanism is designed to store direction memories. Rotating the register ring is also made incredibly easy as the design allows for a comfortable grip with your fingers.
One of its nifty features includes its automated lighting technology. Wearers can easily activate the light sensor by tilting their wrist in a particular direction. This feature is quite handy during outdoor activities such as camping wherein wearers will be subjected to low-light environments and convenience is highly welcome.
Other features that are included with the Pathfinder are built-in altimeter, thermometer, and barometer.
Each will be of great assistance for those planning on camping and hiking through various locations. The solar-powered recharging system is also an excellent inclusion as most of the features this tactical watch has can quickly drain standard battery-powered watches.
The Casio Pathfinder also improves upon its basic features, which makes it a solid entry for military watches as well. Overall, this tactical digital watch from Casio is a beast and a perfect companion for any outdoor enthusiast.

Best Tactical Watch – The nod will once again be given to Casio. Their Pathfinder is a complete package in regards to what you need for a tactical watch. It also avoids having a cluttered appearance, which is a common complaint with tactical and military watches.

Conclusion: Timex and Casio – Which Watch is Better?

Timex and Casio are pretty similar in several aspects that one can say both are cut from the same type of cloth. Both utilize respectable quartz movement, and both are also popular for their wide selection of reasonably priced watches.
When it comes to features, Casio is the king as the company has built a reputation around innovation. Timex focuses on a more traditional approach with their watches and delivers accuracy and reliability first. All things considered; you won’t be disappointed whichever brand you choose here.